President Loh on COVID-19: “The world is not going to go back to the way it has been” 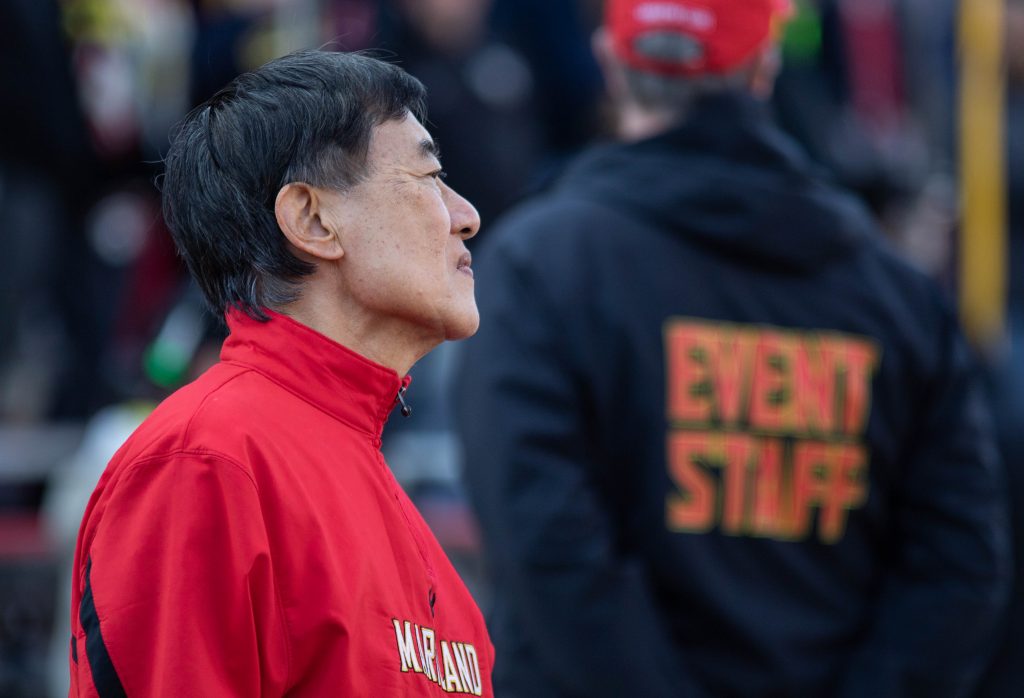 University of Maryland President Wallace Loh watches from the sidelines as Maryland football loses 38-7 to the Michigan Wolverines on Nov. 2, 2019. (Julia Nikhinson/The Diamondback)

The past few weeks have felt like living in a time machine, University of Maryland President Wallace Loh said Thursday.

“It’s like seeing the future unfold in front of our eyes,” he told The Diamondback.

Over the course of just days, the university — along with the nation — has dramatically changed to limit the spread of the novel coronavirus. The university closed its dorms and moved classes online for the rest of the semester, after initially deciding only to extend spring break and hold classes online for two weeks. Virtual classes begin Monday.

The transition online is going as well as can be expected under the circumstances, Loh said. The COVID-19 pandemic comes with all sorts of additional logistical problems for the university community. Chiefly among them is a crashing economy.

Students have been asking for refunds for certain student fees, and rightly so, Loh said. But they should be aware that the university is suffering financially as well. The loss of revenue that comes with refunding fees, as well as increased expenditures to support an online transition, means the university is losing a significant amount of money.

He recalled running into a housekeeper on the empty campus who asked him if she was going to be laid off. With students sent home and the campus empty, there isn’t much for them to do.

For now, staff shouldn’t worry, Loh said, and that’s what he told her. But some students, while not laid off, are temporarily out of work. And without knowing how long the pandemic will last, it’s hard to say what the future holds.

Loh spent several days lobbying Congress with other Big Ten university presidents for a higher education bailout, he said. The $2 trillion stimulus bill, which passed in the Senate on Wednesday and will be voted on in the House on Friday, could provide some relief. But the longer the pandemic continues, the deeper the issue will be.

“Are we going to go back to life as it was before the virus?“ he said. “Probably not.”

Even once the spread of the coronavirus subsides, the world — and higher education —  won’t ever look the same, he said.

One good thing that may come out of this crisis is an acceleration of integrating technology into university spaces, Loh said. Though it’s a direction higher education has been heading in for some time, the coronavirus made it a necessity, rather than a choice, forcing many students and professors around the country to learn tools they may not have otherwise  touched.

“I don’t know what the future will be but I will dare [to] make a prediction,” he said. “There’s probably going to be far more blended education: a combination of the best of digital learning and the best of face-to-face residential education.”

Loh is also working from home, going to his now empty office on campus only to retrieve files and important papers he needs. Everything else happens over the phone or online.

Social distancing is difficult, he acknowledged — humans are meant to live in groups and thrive off physical touch. Historically, when disasters hit, people came together rather than move apart.

So taking care of mental and physical health while isolated “needs to be a top priority,” Loh said. He urged students and staff to look for ways to socialize and connect as much as possible online.

“The notion of building a digital community, in addition to having a real life community — I think that is one of the most significant things that may be here for a long time,” he said. “Digital intimacy, digital embraces and digital hugs, metaphorically speaking, are going to be more important than ever.”