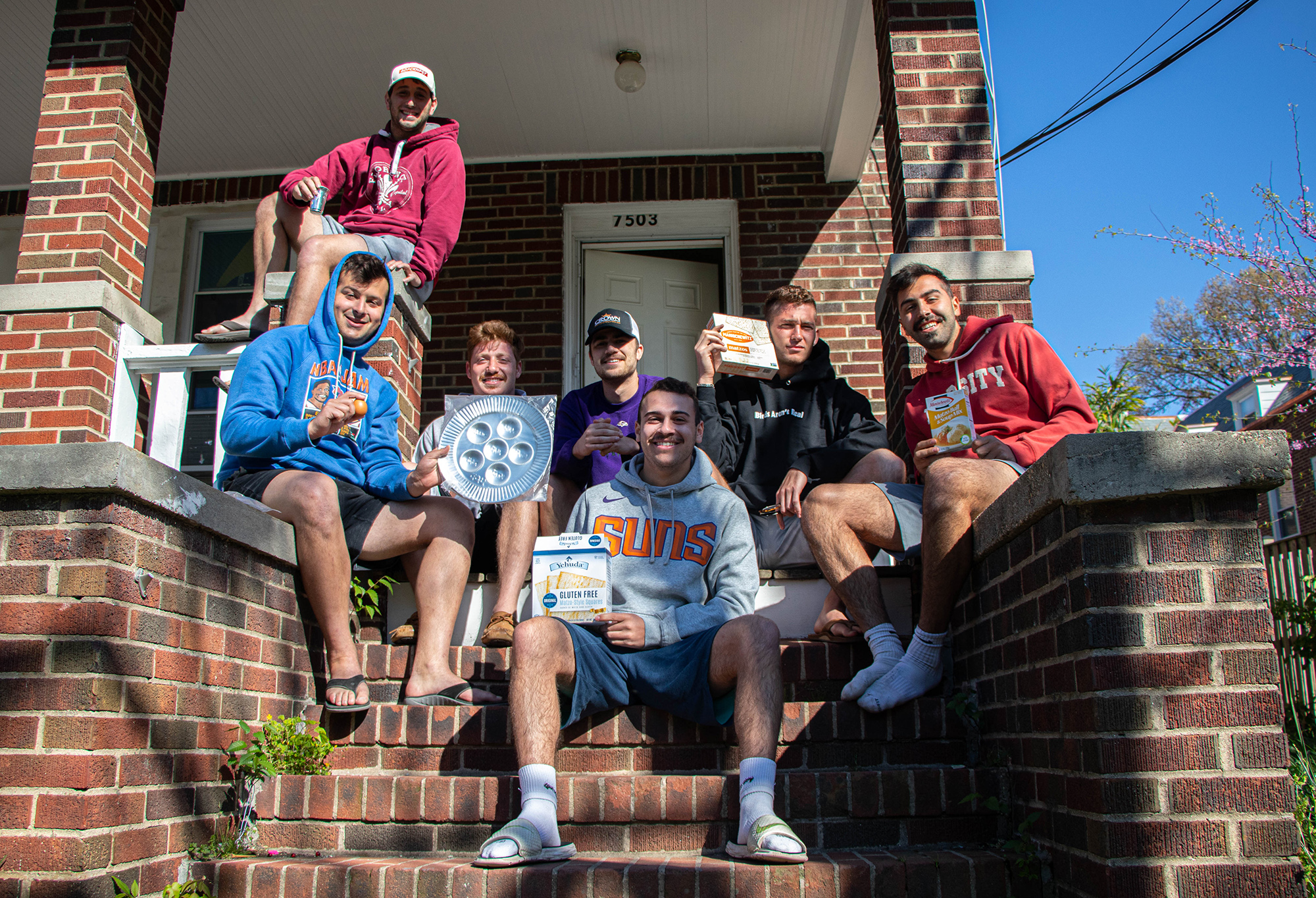 Samuel Lippman, a senior at the University of Maryland, and his housemates hold their Passover Seder essentials outside their house in College Park, MD. This year, due to the coronavirus pandemic, Lippman opted to stay in College Park rather than heading to his aunt's house for the holiday. (Julia Nikhinson/The Diamondback)

Usually, Samuel Lippman heads to his aunt’s house in New York City for Passover. And usually, he looks for his name tag placed before one of the nearly 40 chairs in his aunt’s expansive, opulent dining room. Per tradition, he’d be parked next to someone he didn’t sit next to the year before.

Normally, during the Seder meal, he and his family would help themselves to his aunt’s special brisket. They would each turn to the copy of Haggadah in front of their seat and, at the end, they would sign their name on its first page. They would sing a typical Passover song that his grandmother loved in her honor.

But just as the coronavirus pandemic has upended Lippman’s senior year at the University of Maryland, it has also disrupted his family traditions that typically mark this holy period on the Jewish calendar.

For many Jewish members of the university community, the story is the same. Some are holding Seder dinners with friends and housemates, rather than their families. Others are with loved ones, but with some seats left empty.

But all are making do.

Last week, when Lippman realized he wouldn’t be going back home to celebrate the holiday with his family, he reached out to the Chabad Jewish Student Center at the university.

He filled out a form, requesting a Passover meal for himself and his six housemates: the matzo — unleavened bread eaten during the holiday — and the Seder plate. The plate is special to Passover, with symbols such as bitter herbs, demonstrating the hardships the Jewish community has endured.

Miriam Marks, a senior elementary education major, also reached out to the center to prepare for Passover. Like Lippman, she is staying in College Park, rather than returning to her home in Baltimore. Her father has asthma, and she didn’t want to risk returning home and potentially infecting him with the coronavirus.

She often spends Passover with her father’s side of the family. Though it is a smaller gathering than Lippman’s — at most, 20 people — it isn’t too different.

Marks recalls her family likes to play “Hide the Matzah,” also a tradition for Passover, with a twist. After one person finds it, they must hide it again.

This year, she will celebrate Passover with two other friends who stayed in College Park.

“We are trying to make positive of a bad situation,” Marks said.

For Passover, junior marketing major Dan Alpert and his family usually go to Baltimore to his father’s cousin’s house. In the room where they gather, the adults usually stand on one side, and the children on the other.

Alpert stands in the middle, he said, hopping from conversation with preschoolers to catching up with older family members. But he enjoys it. For him, Passover is more about families spending time together.

“It’s just being together to remember the past,” Alpert said. “It’s this idea of, like, don’t forget where you come from, but also know where you want to go and look ahead to the future.”

In Dina Borzekowski’s household, Passover meant a few things – sitting before a silly tablecloth with a Matzah pattern, drinking wine and having heavy conversations comparing current struggles of oppression and freedom to those of the past.

“We’re politically active in my family,” said Borzekowski, a professor of behavioral and community health. “We bring the story of Passover to a lens to look at how this has been going on for many years and how many different cultures have been oppressed, and how they’ve overcome tyranny.”

Borzekowski is used to having 20 to 30 people in her household. But due to the coronavirus, this year’s Passover will be smaller. Her 83-year-old mother, who usually joins them, lives only 10 miles away but won’t be attending.

Not all of Borzekowski’s children will be at the table, either. Her eldest child lives in Boston. It’s going to be different, she said, and a little sad.

But she’s keeping one particular line from the Haggadah in mind: