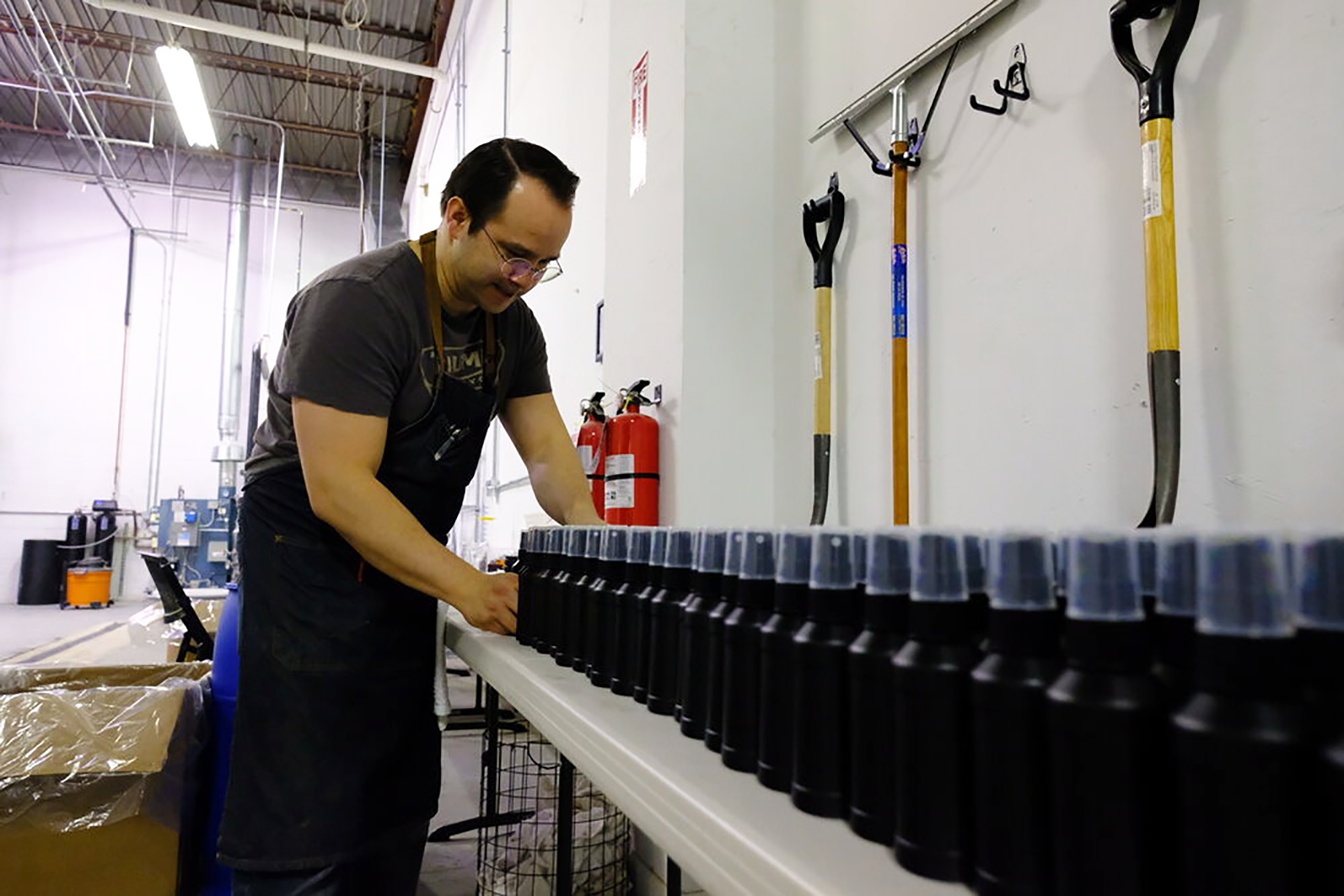 Shmidt Spirits founder Arthur Shmidt arranges bottles of hand sanitizer. In the midst of the coronavirus pandemic, many distilleries and businesses, including this one, have begun to make products that are now scarce, such as face masks and disinfectants. (Photo courtesy of Brian Roan)

Shmidt Spirits had just opened in January, selling bottles of whiskey and gin out of a small space in Beltsville. But within a few months, the distillery introduced another product line — hand sanitizer.

As the novel coronavirus takes hold of Maryland and the United States, altering lifestyles and uprooting familiar routines, distilleries across the nation are bottling hand sanitizer for community members, essential workers, charities and others in need.

“We went from not having any concept of making hand sanitizer at all, to within five days … fulfilling a 1,000 orders for the Amazon distribution center,” said Brian Roan, a College Park resident and the business’s master distiller.

At least ten distilleries across Maryland have started producing hand sanitizer to help combat the coronavirus pandemic. Meg McNeill, co-owner at MISCellaneous Distillery in Mount Airy, which started hand sanitizer production in mid-March, said the distilleries are setting examples for others in the field.

“There’s a sort of a trend now, which is exciting,” McNeill said. “People are stepping up [to] support each other, share best practices.”

Shmidt Spirits and MISCellaneous Distillery are among the smaller Maryland distilleries to begin hand sanitizer production — a product for which Roan said there’s a “shocking need.”

Shmidt Spirits, which operates out of a 3,500-square-foot space, has sold hand sanitizer to Amazon and a number of other companies where workers interact with the public, said founder Arthur Shmidt, who is also a University of Maryland alumnus.

The distillery first started cranking out hand sanitizers after they received a letter from the U.S. Department of Justice’s Bureau of Alcohol, Tobacco, Firearms and Explosives, Roan said. The letter temporarily lifts some permitting requirements to make it easier for distilleries to produce alcohol products for non-beverage purposes.

They’re working off of a recipe from the World Health Organization, Roan said. The primary ingredient is alcohol, he added, which a distillery is already “well-positioned” to produce.

The infrastructure of the distillery is also compatible with hand sanitizer production. Roan said they have the equipment to mix large amounts of liquid and measure alcohol content. It also helps that they’re already set up to regularly receive bulk shipments of pure grain alcohol, he said.

“Just having those facilities … and being able to measure precisely to make sure that we are at the 80 percent alcohol content necessary to actually be a sterilizing, sanitizing agent is very important,” Roan said.

They were able to produce their first 2,000 bottles quickly since they were able to get the spray-top packaging they needed, Roan said. But the second batch was more challenging.

“Essentially the entire world was out of spray toppers,” Shmidt said, adding that they made about 30 calls to suppliers — and every single one said they were all out.

Shmidt Spirits’ sanitizer requires a spray top, since it’s not gel-based, in contrast to many of the products that used to be readily available on the shelves. Roan said he and Shmidt emptied shampoo bottles and soap dispensers, testing to see what kind of cap might be compatible.

But then, by a stroke of luck, one supplier said they could provide 5,000 more toppers, Roan said — just as a plane was coming in with a shipment of them.

“We’re literally timing it to the cargo plane landing on the tarmac for certain materials, which is just kind of crazy and bizarre,” Shmidt said.

Pouring and packaging gallons of hand sanitizer into thousands of bottles by hand is another challenge, Roan said, since the team isn’t working with an automated bottler. They can knock them out pretty quickly, he said, spending a lot of time at the distillery and then taking the bottles home afterward.

“We take the bottles home, sit down in front of the television with 200 bottles and a roll of label, and just watch ‘Frasier’ while you’re putting labels on all these little bottles,” he said.

While the distillery is producing hand sanitizer for sale, which Shmidt said helps the company avoid bankruptcy during this economically tumultuous time, they want to be able to serve the community, too.

They’re trying to raise $10,000 on GoFundMe to cover the production of 2,000 4-ounce bottles for the community, according to the webpage. The bottles would be free to families in need since the money raised would cover the costs.

“Being able to give back and make sure that the community is healthy, in that way, is important to me,” Roan said. As he spoke, he stood on his front porch in College Park. Neighbors chatted around him, and a child played outside in a nearby yard.