Are quarantine concerts the future for the music industry? 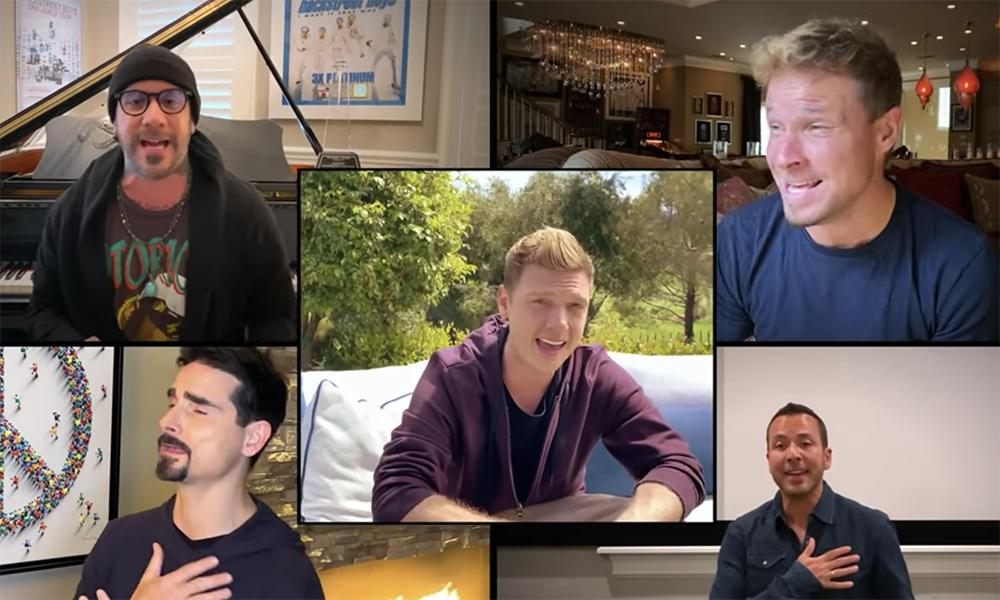 The Backstreet Boys were among the musical acts to join Elton John’s 'Living Room Concert for America.' (Photo via YouTube)

With COVID-19 forcing mass quarantines all over the world, a lot of our favorite creators are suddenly becoming the physical equivalent of Twitch streamers and camgirls, embracing their internet connections and trying their damndest to not look like shit on webcams. Celebs — they’re just like us! One of the more notable developments to come out of self-isolation is the performances that musicians are putting on for their fans via the interwebs.

The first of these concerts that I was made aware of was for Ben Gibbard’s band, Death Cab for Cutie. As opposed to a one-off couch concert/MTV Cribs outtake, Gibbard decided to go all in: two weeks of home performances with a new charity sponsor each day to encourage donations. What started out as a nebulous alternative to his canceled solo tour soon turned into an indie community bonding experience, with a number of deep cuts (“Me & Magdalena”) rubbing elbows with covers (Radiohead’s “Fake Plastic Trees”) and references to old side projects — Gibbard’s most requested song wasn’t actually a Death Cab number, but rather The Postal Service’s “Such Great Heights.”

Gibbard averaged a couple thousand viewers each performance, and that number grew every day as the two weeks progressed. As a result, the Death Cab frontman added a Q&A segment, brief monologues about songwriting and his personal habits, and turned the second week into themed days that pulled from different albums, covers and his own obscure favorites. Gibbard didn’t start the trend, but he did bring it to a level of professionalism and interaction that made live streamed concerts seem like a viable option.

As often happens, the idea spread and grew bigger. Elton John’s “Living Room Concert for America” is the highest profile example so far, which aired on broadcast television and starred famous musicians spanning different genres and eras. Mariah Carey, Billie Eilish, Dave Grohl and the Backstreet Boys all got a chance to show off their tunes and personal spaces (shout-out to Mariah for apparently employing an in-house makeup artist) for us plebeians to be jealous of. Gaze, for instance, at Tim McGraw’s flex of singing his contribution from the diving board of his backyard pool, or marvel at Camilla Cabello and Shawn Mendes’ basement studio/doomsday bunker that will shield the pop music power couple from all forms of apocalyptic scenarios.

So, is this the future? Will we be tuning into the latest Zoom call from Lady Gaga or Pearl Jam in place of their canceled tours? Will these live streams become region-specific to replicate the one-time-only appeal of having your favorite singer come to your town?

Consider for a moment artists who have famously deleted their online presence in the past. Ed Sheeran, Taylor Swift, Kanye West; these are artists whose level of fame and monetary gains meant that they didn’t have to deal with the toxic sludge pit that places like Twitter often become. They could go on extended hiatuses without major repercussions. But as the Elton John’s and Jimmy Fallon’s of the world start to come a-knockin’, it doesn’t seem ludicrous to think that every musician is seeing this as the only way to reach their audiences in the current climate.

[Read more: Why I’m trying to learn every word of Lady Gaga’s ‘The Fame’ during quarantine]

Still, it seems unlikely to last in its current format. Although there’s no immediate end in sight, we’ll all have to come out of our homes eventually. When we do, I know one of the first things I’ll want to do is see a live show, be it music, theatre, a movie or an art exhibit. That in-person excitement is the kind of thing that can’t be replicated in a home context. It’s also important to note that there’s no money in home concerts: the point is that celebrities are stuck inside, too, so let’s commiserate together and play a little music. Can you imagine how cynical and off-putting these experiences would be if you had to, I don’t know, pay to watch your favorite artists livestream (be sure to hit the like and subscribe button!)? I believe that day will probably come soon, especially if mandatory self-isolation periods are extended, but tell me that doesn’t reek of profiteering off a global pandemic. When we have no choice and are desperate for entertainment, who will be the first to shed the “we’re all in this together” front and monetize their at-home experience?

We’ll just have to keep tuning in to see. But it is nice to think that, at the moment, we’re all doing the same thing. As Elton John said at the top of his special: “Since we’re all hunkered down together, we thought we’d put together a little show for you, from our homes to yours.” It’s an approximated experience, but it’s better than nothing.