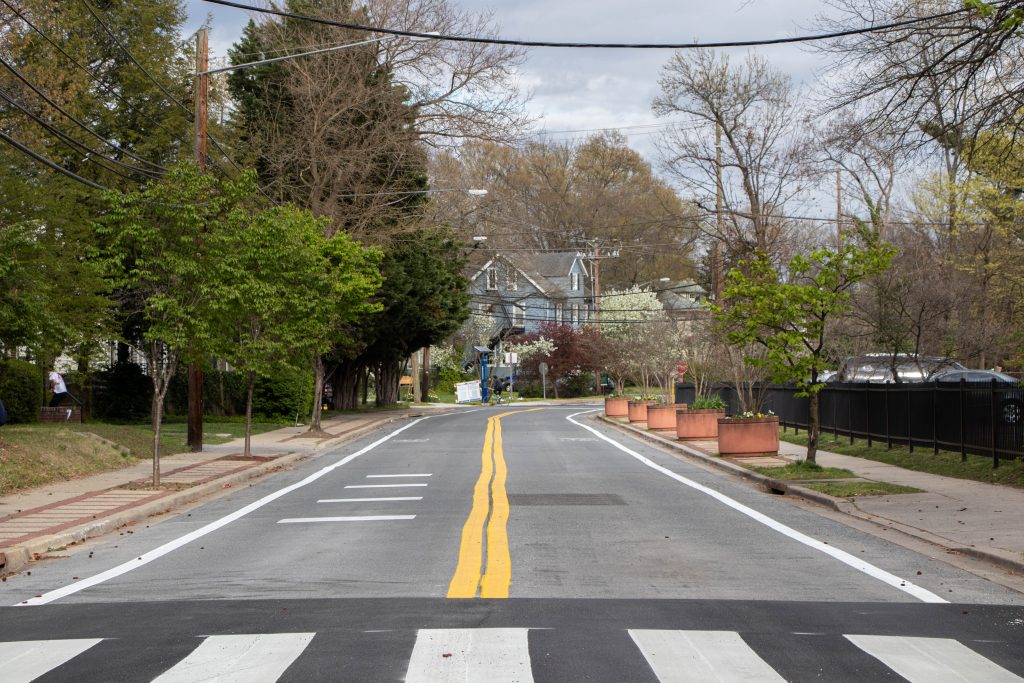 Some College Park residents find themselves uncertain about their futures due to the coronavirus pandemic. (Julia Nikhinson/The Diamondback)

Rosemary Perticari has lived in the same house in College Park for 23 years. But if the upheaval caused by the coronavirus pandemic continues into the next year, she’s worried she and her husband may have to move.

They both work part-time jobs that have been upended by the outbreak. Perticari’s husband, Charlie, typically works at an aftercare program at a Quaker school in College Park. That program hasn’t been offered lately, so the income Charlie usually brings in has sputtered out.

Meanwhile, Perticari has worked as a music teacher at the Metropolitan School of the Arts in Virginia for seven years, teaching children from ages 4 ½ to 15. The school has moved to distance learning — a switch that so far has gone “really well,” she said — but Perticari is still worried.

Some of the school’s funds come from live performances at the end of the year — events that have been canceled.

“We’re just kind of all holding our breath,” Perticari said. “If the school doesn’t survive, we’re not going to survive either.”

And in Prince George’s County, there were over 3,700 unemployment filings that same week. As of Wednesday, the county had 403 confirmed cases of the virus.

In College Park, some residents say their lives have been turned upside down. They’ve been forced to confront and adjust to seismic changes, all the while being riddled with newfound anxiety.

Perticari and her husband rely on Social Security and a pension. The money they spend on “not immediate living expenses” — real estate taxes and Medicare, among other things — can total over $12,000 each year. But Perticari said she is most worried about the status of her 401k, which took a hit in the stock market.

Perticari said this is not the first time she and her husband have had to worry about money. After Charlie retired, their income was cut in half, so he was eventually forced to take on a part-time job.

The Perticaris “don’t have an elaborate lifestyle,” Rosemary said — they don’t go on vacations and their car is 25 years old.

Perticari is over 65 years old, making her more susceptible to becoming seriously ill from COVID-19. She described the anxiety the virus evokes in her as “constant hypervigilance.”

“It feels like there’s an invisible monster out there that you can’t see, that you don’t know whether it’s in the air or on a surface you might touch. You just don’t know where it is,” she said. “It’s like your fight or flight system is always simmering.”

[Read more: Some students with weakened immune systems are concerned about UMD’s response to COVID-19]

Without much to do, Perticari said she has been staying at home over the last couple of weeks. She frequently watches the news — what she calls “the virus show.”

The virus has hung over her extended family, too. Her brother-in-law lives in a nursing home, and she and Charlie are no longer allowed to visit him. When they bring him little presents — batteries for his radio, ginger ale that’s better than the kind served at the home — they have to leave them at the front desk.

To make matters worse, Perticari said they found out in February that he has terminal lung cancer.

“Nobody can visit him, and he’s got, like, two weeks to live. And so, that’s a human tragedy,” she said. “But that’s not just going on with our family. It’s going on with a lot of other people, too.”

Dave Olfky estimates that in the last couple of weeks, the number of phone calls his business typically gets has been cut in half.

Olfky’s company, Roborant Construction Services, tackles commercial construction and residential projects. When Olfky doesn’t contract business out to other workers, he often enters the houses of his clients, who tend to be older.

“Things are not normal,” Olfky said. “I have told all of them that unless they have something that’s a real emergency that I don’t want to put them at risk, and I wouldn’t want them to put me at risk.”

Olfky lives with his wife and son. Even though his wife is asthmatic — which puts her at increased risk should she contract the virus — Olfky is hopeful.

Olfky said he is more worried about other members of the community. He works as a local soccer coach and has been thinking about the kids’ families. He says he frequently sends them safety recommendations and information about local food banks.

He’s also concerned for his daughter, who is over eight months pregnant and lives in Olney. Although he’s waiting to hear what her doctors recommend, he expects that at first, he won’t be allowed to hold the baby — his first grandchild.

“It weighs on you, but the bigger crisis is for the long term health of everyone else,” he said.

Christina Toy and her husband have never experienced this sort of financial hardship before.

Toy works two jobs: one as a flight attendant for United Airlines and another as a doula, guiding women as they prepare to give birth and go through labor. Meanwhile, her husband works as a professional musician.

Ever since the coronavirus outbreak accelerated, they haven’t been able to continue work as usual. All of her husband’s gigs have been canceled, although he’s been able to teach some music classes virtually.

“It’s very hard,” she said. “I don’t really know what the future holds for us.”

Toy returned to her flight attendant job after a year of maternity leave on March 13. One week later, she accepted a leave of absence, which doesn’t come with pay but still allows her to receive health benefits until June.

Despite expected layoffs at United, Toy is not concerned about losing her job. She has been with the airline for 13 years.

“It’s just a matter of when, and when it comes back, will I be able to make as much money or work as often as I was able to before?” she said.

Toy added that this is a particularly scary time for flight attendants, since the job entails a lot of person-to-person interactions. When the outbreak became more widespread, she said she started wearing gloves and masks — but there was only so much she could do to protect herself.

Toy has two children, both of whom are under three years old. Now, her days consist mainly of looking after them — a chaotic task since “they do not entertain themselves at all.”

And like Perticari and Olfky, Toy also has other family members to worry about. She said her mother and her husband’s parents are all at high risk of becoming seriously ill if they contract the virus — and apart from their age, they also have underlying health conditions. Every spring, Toy’s family usually visits her in-laws in Delaware. This year, the trip was canceled.

But Toy took solace in the fact that her family is used to saving money.

“We will make it through,” she said. “Our budget might be a little smaller and a little tighter than it’s been before, but that’s okay.”

Despite the overarching anxiety, Perticari, Olfky and Toy have all found silver linings.

For Perticari, it’s being able to see her dogs more often, avoiding a 30-mile commute to work and immersing herself in her arts and crafts — a hobby she calls her ‘distraction.’ For Olfky, it’s having time to work on household projects and seeing community members support each other.

And for Toy, it’s hoping that after the pandemic, communities across the country will be more united.

“Our culture has been selfish — very, very selfish — in the past,” Toy said. “And I think, hopefully, the realization that we need to be more united and look at ourselves as a human race and not just one individual will help everything.”