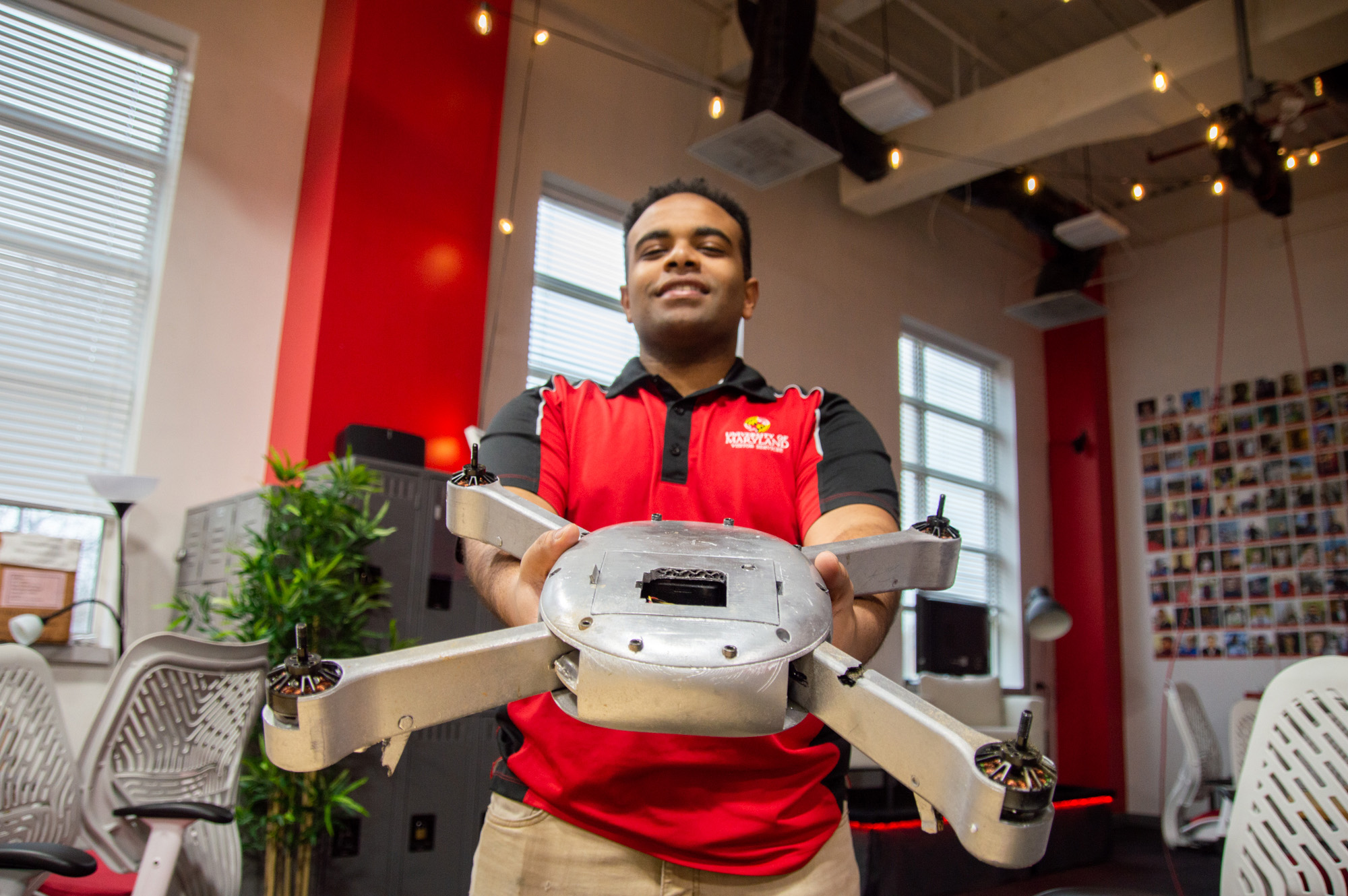 One of the Door Robotics founders, Josh Ermias, holds his prototype drone in the Startup Shell on March 6, 2020. (Joe Ryan/The Diamondback)

The sun had just started to rise in Los Angeles, California, when Josh Ermias and Vincent Jaugan hopped out of a car and took a drone out of the trunk. They maneuvered it up into the air, flying it across the early morning sky.

Then, they drove off, until they found another spot of scenery that caught their eyes. They wanted to capture the golden hour.

The two University of Maryland students spent their winter break capturing bird-eye views from Los Angeles to San Francisco, California to promote their company, Door Robotics — a business venture supported by the on-campus, student-run incubator, Startup Shell. What once began as a one-man show back in 2016, inspired by Ermias’ vision for a drone that could deliver Chipotle to his window, has now evolved into a 12-person operation, mainly focused on using drones to produce 360-degree videos.

The short-term goal of Door Robotics — which is now co-run by Ermias, Jaugan and Patrick Crowe, another student from this university — is to set up a software studio, where customers can convert their 360-degree videos to 2D videos , or use it for applications like virtual tours and even search and rescue operations.

But because drones have so many applications, Ermias isn’t planning on settling with just that list.

“We’re planning on experimenting with … different ways that drones can help everyone out,” said Ermias, a senior and computer science and kinesiology major.

Drones equipped with cameras are no novelty, but Jaugan and Ermias said Door Robotics’ devices are the only ones on the market with 360-degree cameras fully integrated. People typically attach cameras to drones using a rig, but this contraption can interfere with the device’s GPS system, or throw off its center of gravity.

Ermias’ prototype, though, is smaller and lighter than most. It also has a 360-degree camera attached to its body, and comes with a software that allows the user to format and adjust the resulting footage to their liking.

Ermias and Jaugan met at the start of last year, through a mutual friend. When they started chatting, they were surprised to find they both built drones. While they worked with different models, they still bonded over their shared interest in the technology’s potential to shoot 360-degree video.

While Ermias saw drones as the future, Jaugan — a junior communication major — saw them as more of a hobby. Still, when Ermias invited him to join Door Robotics last summer, Jaugan promptly accepted the offer, taking the reins on the marketing side of the business.

The team also started searching for investors in the beginning of last year, hoping to further expand the company. By the time school started, they had one.

Door Robotics has only grown from there. When Jaugan and Ermias traveled to California over winter break, they closed a deal with two other investors to help them market and sustain the company.

The three co-founders recently decided that their niche in the market will be filming videos with their drones that real estate companies can use to advertise properties — a decision made after consulting with Harry Geller, an entrepreneur with the business school.

Geller helped the company analyze the drone market — which is broad, spanning from photography to mapping — and select real estate as their target business.

“When you develop a product, you have a specific market in mind and then, as you get it going. then you sort of have to look, ‘Okay, what else is out there?’” he said.

The way most real estate businesses market properties now is by taking photographs throughout a building or home and stringing those together in a collection. When businesses try using drones to photograph property, Geller said the images’ quality tends to lack..

That would not be an issue with Door Robotics drones, Ermias said, because they are equipped with integrated 360-degree cameras. So, rather than taking multiple images for one photo reel, their drones could produce virtual tours of properties.

“Our drone could do it all in one go, so it makes it a lot easier,” Jaugan said.

When the team conducts test flights, they usually visit the Fearless Flight Facility, a wide flight testing field on campus, since it is illegal to fly drones in the Washington, D.C., area.

But if they don’t need that much space, prototypes of their drones can be found flying in the engineering school, about three to four feet up in the air.

“The future of computing is going to be where I imagine drones having the ability to help us … make our lives a lot easier,” Ermias said.