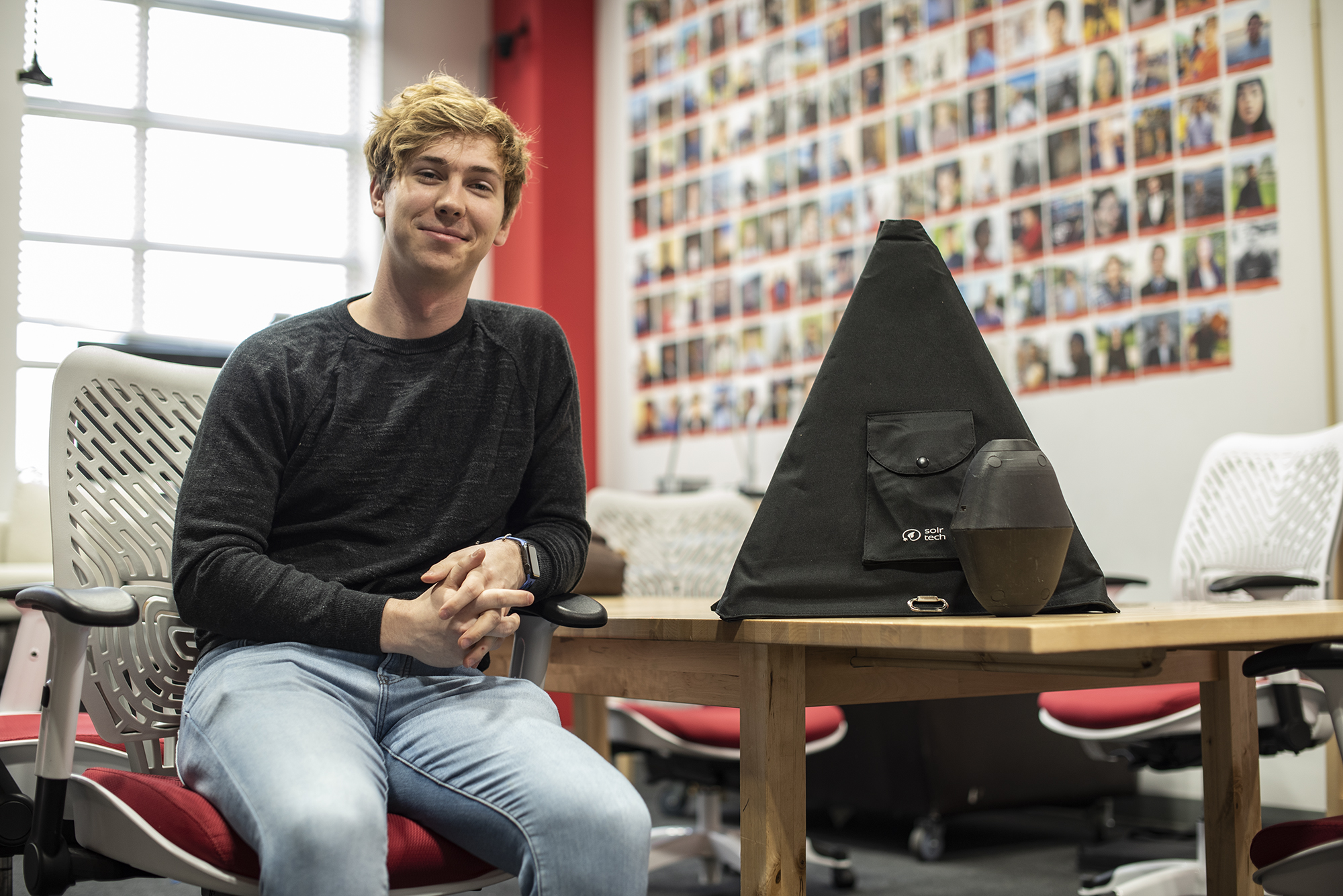 Alex Onufrak, a senior information sciences major at the University of Maryland, sits next to a demo of Solr at Startup Shell on March 10, 2020. (Eric Harkleroad/The Diamondback)

It was the summer before he transferred to the University of Maryland. Alex Onufrak was sitting under an umbrella outside of a cafe, talking to his friend and escaping the heat of San Francisco. He pulled his phone out of his pocket and noticed it was about to die.

He searched the floor, the walls, looking for an outlet. He couldn’t find one, and he didn’t have a battery pack with him. He would either have to go inside or give his phone to the waitress to have it charged. But he didn’t want to do either.

As he was struggling to find a power source, he came up with an invention: the Solr Retrofit Kit, a solar-powered charging station designed to connect to an outdoor patio umbrella.

Onufrak, a senior information science major, transferred to this university in 2017 on a mission to grow as an entrepreneur. For days, he sat down and sent emails to over 100 people across the campus, hoping that one of them would buy into his idea.

Onufrak said Mark Stewart, the sustainability manager for the Office of Sustainability, replied and connected him to the behavioral and social sciences college, which had just received a grant to replace the umbrellas in front of LeFrak Hall with ones that had charging stations. (Stewart was not available for comment by publication time.)

“It was kind of really good timing,” Onufrak said. “If I hadn’t emailed obviously this wouldn’t have happened.”

The umbrellas in front of LeFrak Hall are set to be equipped with five charging stations in April, said Onufrak. But it is still unclear whether other places on campus will have the product in the future, he said.

Drew Bewick, an entrepreneur in residence in the business school who mentored Onufrak, said he thinks the university will determine if the product is a good fit before expanding it to other locations on campus.

“Will it help provide a better student experience on campus? There’s usually one great way to find out and that’s to go test it and try it in the environment and evaluate it for yourself.” Bewick said.

When Onufrak transferred to the university, he didn’t know exactly where he would fit in. He wasn’t sure of his major or his community. But he knew he’d found his home in the Startup Shell’s workspace.

The student-run incubator, located near the engineering buildings, has a lounge and entire walls of whiteboard. It’s a place where students with business ventures can work and connect, he said.

“If you’re running through a problem in your own venture … almost 100 percent guarantee there’s somebody in there who has gone through the same problem,” Onufrak said. “So you’re able to go and talk to those people, and they give you their input.”

Garnett, who later founded a company that offers 3D design and other services, and Onufrak were a match. The duo started working together on Solr and the design for the Solr Retrofit Kit — sometimes meeting in McKeldin Library and sometimes in the Startup Shell to work on the sketches.

They would brainstorm what could go wrong with the design, and then they’d find solutions. Once they had narrowed it down to a design that would work, Garnett transformed it into a 3D model.

“[Onufrak] was really interested in making this product happen,” Garnett said. “From the original meetings and kind of getting started on actually designing the product, he was really excited to see how it was gonna look and how it was going to be like seeing it in 3D.”

Now, Onufrak is working on manufacturing the design. In the past, he had worked with Chinese manufacturers, but he is now looking to build every part of the product in Maryland, including the solar panels.

Onufrak said the device presents a more sustainable charging option because of the power it generates, but it’s not an end-all-be-all.

“They don’t contribute significantly to the overall … solar energy production for whatever company buys it for their installation,” he said, ”but it is a step in the right direction.”