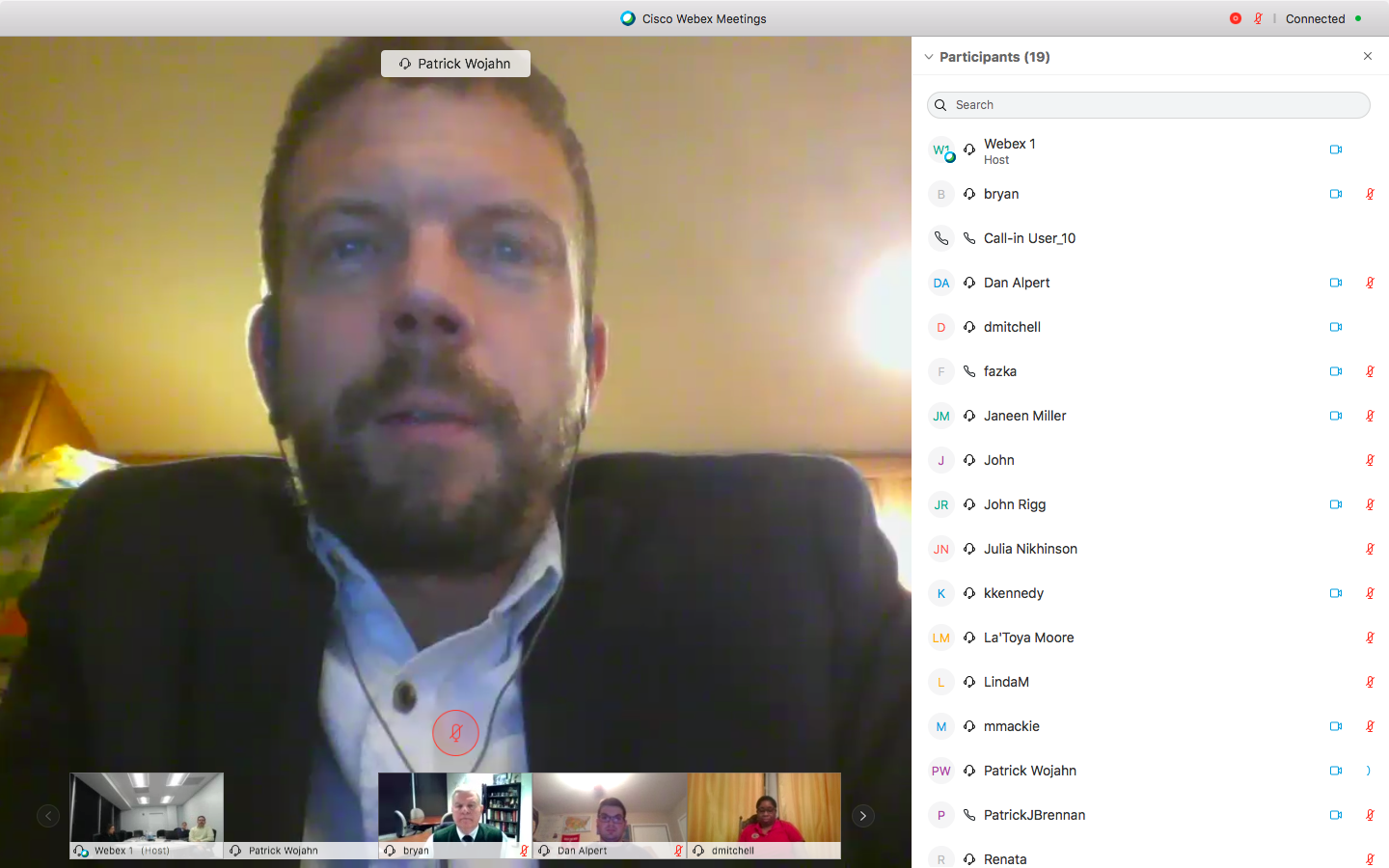 Due to the coronavirus pandemic, in lieu of an in-person city council meeting on March 17, 2020, the College Park City Council opted to hold the meeting over Webex. (Angela Mecca/For The Diamondback)

While the work session took place outside of the council’s regular meeting spot in Davis Hall, Mayor Patrick Wojahn said that Tuesday night’s virtual session proved that even in the wake of difficult circumstances, “the work of the city must go on.”

District 3 Councilman John Rigg echoed Wojahn, adding that in the midst of the pandemic, the city must rise to the occasion.

“I don’t think that any of us should labor under the assumption that our world will be unchanged at the end of this,” Rigg said. “This is the time to really step up as a community.”

More than 25 people “attended” the virtual meeting, including council members, city staff and residents. Those who wished to participate could call in or download a video call software program that showed each council and staff member as they spoke.

Oscar Gregory, a city resident who ran for a council position last fall, applauded the council for their efforts to continue to hold regular meetings, and for finding a way to engage with residents through technology.

“You guys are awesome,” Gregory said to the council. “I don’t shell out too many compliments, as you know.”

Moving forward, Gregory said, he hopes that other city organizations, such as the city’s boards and committees, will be able to conference virtually as well.

The city released a public statement on Monday detailing further cancellations and postponements of city meetings and events.

All city buildings will be closed until further notice, according to the statement, but services that take place through a window at Davis Hall and City Hall — temporarily located at 8400 Baltimore Avenue — will continue to operate during normal business hours.

During Tuesday’s work session, Wojahn said he was worried about how local businesses will be affected by closures, and he proposed the council look into developing a small interest loan program that could economically support local businesses.

The local transit system could also be negatively affected due to lack of use, Wojahn said.

Congress is currently deciding on “relief packages” that would provide financial resources to industries taking a direct hit due to the coronavirus, Wojahn said. During a special session — which allows for the council to decide on legislative measures during a work session — the council agreed to support a letter asking the federal government for resources to help transit systems such as Metro.

At the conclusion of the work session, which lasted more than three hours, applause broke out as council members thanked city staff for arranging the virtual meeting.

“I just want to say to the people of College Park: You are not alone,” Mackie said.

But the next few months could be “tough,” Wojahn said about the current state of the city — and the world. And for many, he added, isolation itself could be incredibly difficult.

“Everybody, please hang in there, be safe,” Wojahn said to fellow council members and residents listening in, all before signing off with his usual: “Goodnight, College Park.”