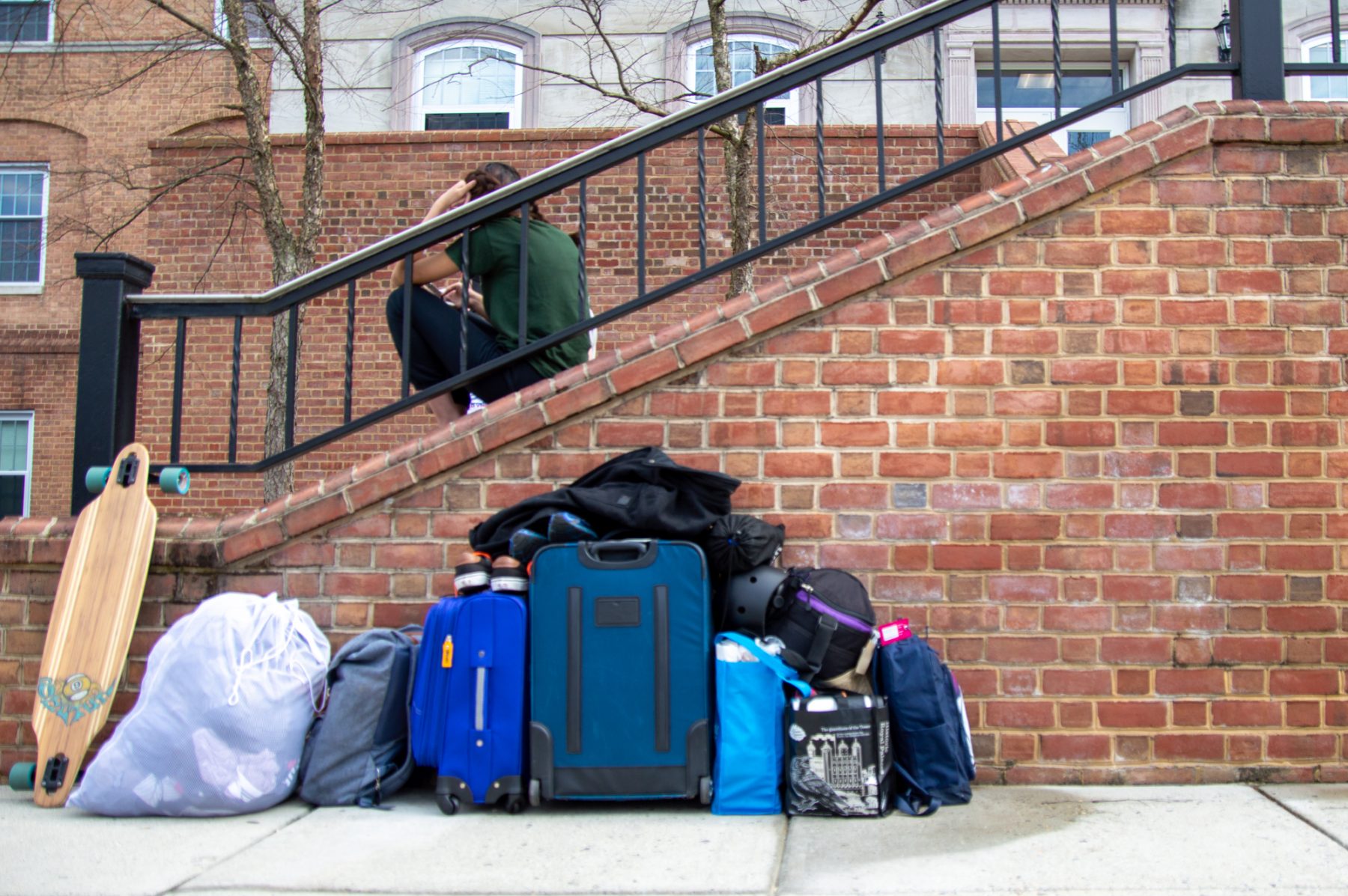 A pile of suitcases sits outside of Easton Hall as students prepare to return home for a minimum of four weeks on March 13, 2020. (Joe Ryan/The Diamondback)

Four days before the University of Maryland was set to start spring break, Callie Tansill-Suddath decided to go back to her home in Silver Spring. She left the campus because of the coronavirus — even though she had no symptoms.

The journalism graduate student is among the many University of Maryland students who have a compromised immune system, which makes her more vulnerable to contracting the virus. She’s taken medication that weakens her immune system ever since she had an organ transplant about 13 years ago.

According to the Centers for Disease Control and Prevention, COVID-19 disproportionately affects older populations and people with weakened immune systems. Two days after she left the campus, Tansill-Suddath’s doctor emailed her that she should isolate herself from others.

Over the past few days, Tansill-Suddath’s worries have escalated. She’s found herself getting caught up in headlines that sensationalize the virus, she said, and her nerves heightened after learning that Prince George’s County is home to Maryland’s first case via community transmission. She, and other immunocompromised students at the university, said they’d liked to have seen clearer and quicker communication from campus leaders about the situation.

“When I was in class, and I was around people who I know had not been out of the country two weeks ago … I felt a certain level of security,” she said. “But now that that’s not the only way it’s being transmitted, it added definitely a different layer of concern.”

On Thursday, the university canceled classes the next day, starting spring break a day early. The university had already announced that spring break would be extended by one week, and classes would be held online for at least the following two weeks.

Journalism faculty were “very supportive” of Tansill-Suddath’s situation, she said, allowing her to miss classes or trips — a stark contrast from her undergraduate experience at George Washington University, where people were “not nearly as supportive or willing to compromise.” And if she hadn’t been immunocompromised, she would’ve stayed on the campus for her classes last week.

But the fact that classes were scheduled as normal right up until the last day before break was concerning, she said.

“That’s essentially doing the biggest thing that you shouldn’t do, which is go to a gathering,” Tansill-Suddath said.

In a statement, Sacared Bodison — the interim director of the health center — reaffirmed the university’s commitment to helping students. She added there has been more than a dozen updates to the campus community during the coronavirus outbreak.

“We want every student to feel cared for and informed, especially throughout this public health crisis,” the statement read. “We continue to invite individuals with special health conditions — like those who are immunocompromised — to reach out to us so that we can provide additional support.”

Lauren Anikis, who has multiple illnesses affecting her immune system, said the university’s history in dealing with autoimmune viruses on this campus made her especially hesitant to go to classes.

In 2018, freshman Olivia Paregol — who had a compromised immune system — died from complications of adenovirus amid an outbreak on the campus. The university did not alert her parents of the outbreak until her father reached out — a delay he says cost Paregol her life. The rest of the campus was not notified until the day after her death — 18 days after the university first knew of the outbreak.

The University Health Center sent messages about the virus specifically targeted to all “known immunocompromised students” — or those who had disclosed their status — a university spokesperson wrote in an email.

And in campuswide emails from the university regarding the coronavirus, university officials said that such students should seek medical guidance as soon as possible. However, Anikis said that she received no emails specifically for students who are immunocompromised.

For Anikis, a senior journalism major, the university’s response started off as “really concerning,” since some students were not even receiving emails intended for the whole campus. It took three days for a university-run email address to respond to her questions about her situation.

Anikis was also frustrated that information from the journalism school, which explained that “deep cleaning” of classrooms would take place after a handful of professors and students were potentially exposed to the virus at a conference, was not provided to the entire student body.

So when photos surfaced of workers in hazmat suits cleaning the journalism building, her friends became worried.

“At the beginning of the week, I think that there was very little communication,” she said. “It was a big cause for concern.”

However, as the week progressed, Anikis believed the university’s communications improved.

Ethan Hawker, who has Type 1 Diabetes, went to the health center early last week because he had cold-like symptoms. He received a test for strep throat, and it came back negative.

The sophomore government and politics major said he had a positive experience with the health center, as they gave him a note that excused him from classes the rest of the week. However, he felt there could have been more transparency from the university when communicating with students, especially with the photos of workers in hazmat suits.

“Not telling anyone that this was happening is definitely a cause for concern and can cause a bigger panic,” he said. “More openness from the university would have been better.”

The students are also taking extra steps to ensure that they do not contract the virus. For example, Anikis began taking Vitamin C medications to improve her immune system’s defense against viruses.

Meanwhile, Hawker said that when he flies back home to Illinois, he will be extra cautious about interacting with others.