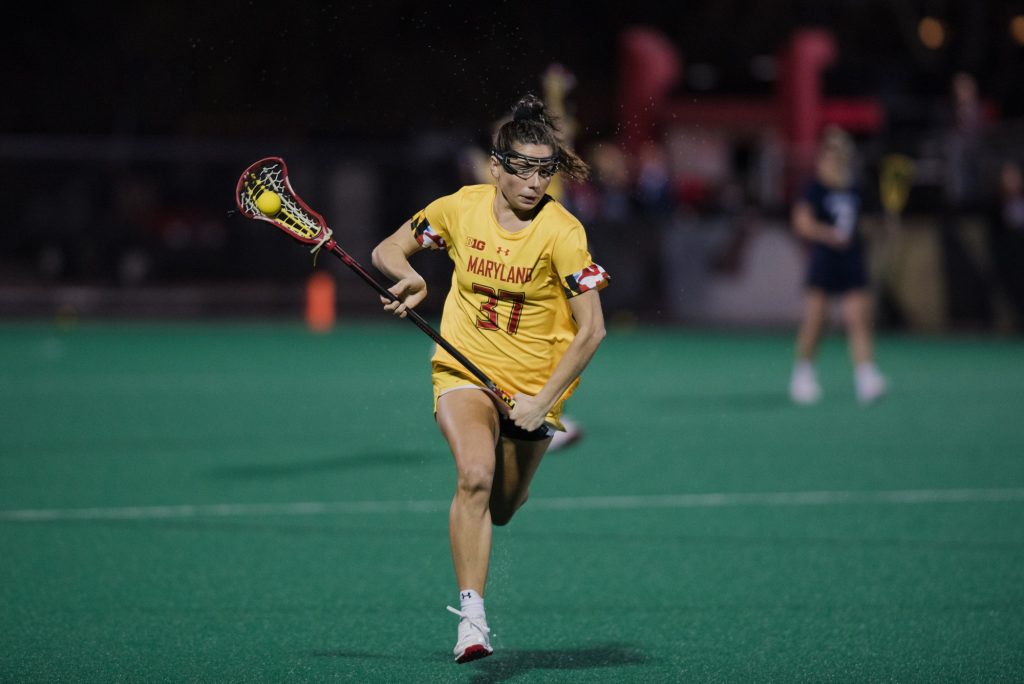 Hofstra’s Shannon Boyle tracked down a draw control early in the second half in the match against Maryland women’s lacrosse.

The Pride then quickly worked the ball toward the Terps’ cage before giving midfielder Taylor Mennella possession — and an opening to put away her second goal in three minutes.

Scoring rapidly off the draw has been a staple of Hofstra’s offense this season, and it showed as much early in Saturday’s match. But coach Cathy Reese’s squad went back and forth with the Pride’s draw control unit — the country’s best, based on draw control percentage.

And while the Terps didn’t win the draw control battle, their effort was paramount in countering the attacking threat that such a talented unit posed, contributing to a 16-11 Maryland victory.

“I don’t know that we ever had an answer on the draw,” Reese said. “A lot of those were 50/50 balls and they are fast and athletic and they work hard. Sometimes, they outworked us.”

In the first half, the Pride won seven straight draws, initially creating problems for the Terps. But with goalkeeper Maddie McSally’s career-best 16-save performance, the Maryland backline held Hofstra to three first-half goals.

“We want to be the momentum switch,” McSally said. “If we can, we want to come up with a big stop to send the ball down the other end. That just comes with us sticking to playing our defense … and playing as hard as we can for a full 60 minutes.”

The Terps have made large strides the past few games after giving up 19 goals to North Carolina on Feb. 22. In particular, they are playing clean first halves.

In the first half of the past three games, Maryland allowed a combined eight goals. During the second halves of those matches, the Terps conceded 20 total goals.

Reese has repeatedly said she wants her team to play a holistic match, rather than show flashes of success.

And Maryland seemed to have all the answers to Hofstra’s frequent possession from the draw in the first half.

“Defensively we’ve got an extra person back, so we didn’t give up any breaks, which was nice,” Reese said. “You have to prepare for a couple of those players who just go hard and generate good looks. … We needed to make sure we had our help coming early and when we did that we were successful.”

But the second half proved to be more of a struggle for the Terps, especially after Mennella slotted two quick goals, one of which came directly from a draw.

However, Maryland’s draw unit appeared buoyed by the challenge. The Terps scored two key goals down the stretch, directly off controls of their own.

“Coming out attacking, winning every single moment,” attacker Brindi Griffin said. “One thing Cathy emphasizes is not focusing on the end result of the game, just winning each little moment. For draw controls, that’s a huge thing.”

When the final horn sounded, it was Hofstra that held the advantage in draw controls, 15-14. But, the Terps gave the Pride their closest draw matchup of the season.

“Hofstra is good,” Reese said. “I’ve got to give them credit too. I’m picking on ourselves, we got a great win. They are fast, they are aggressive, they are athletic and they pushed us today.”

Maryland is still working on its consistency. The draw particularly has not been as much of a go-to as it has been in previous years. But, the Terps got a boost of confidence through their draw control unit, which showed inklings of its potential against one of the best draw control units in the country.