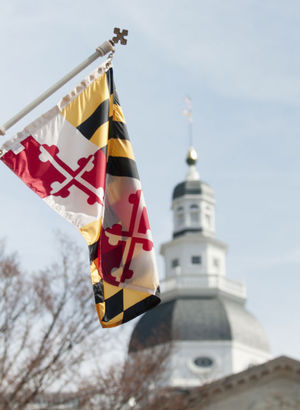 A Maryland flag outside the State House in Annapolis. (File Photo/The Diamondback)

Maryland lawmakers heard arguments Thursday for a bill that would establish a mental health task force — a group to study ways for institutions of higher education to improve mental health support for students.

If passed, House Bill 1504 would bring together state senators, state delegates, representatives from the University System of Maryland and a psychiatrist, among others. The 15-member group would study the procedures of the institutions, examine the challenges those institutions face in providing sufficient care and review the best practices for accessing mental health resources, among other responsibilities.

University of Maryland community members testified in support of the bill at a hearing in front of the House Appropriations Committee.

“It’s hard for me to sit here today and not think how Yudi and other students like him could be saved if we had better and more accessible mental health resources on our campuses,” said Kindra, a senior economics and international business major. “I can’t speak as to what exactly this task force might have done for Yudi. But I’m sure the task force will come up with solutions and propose recommendations that solve the issues that we currently face.”

[Read more: “At SGA-supported sessions, UMD students can learn how to respond to mental health crises”]

Meanwhile, Gideon Epstein, who graduated from this university in December, also testified in support of the bill. Epstein went to this university’s Counseling Center when grappling with a friend’s suicide, but a staff member told him he wasn’t allowed to come back for another appointment because he wasn’t deemed “high enough priority.”

“In different ways, both my friend who passed away and myself, lacked access to proper mental health support,” Epstein said. “This needs to change.”

The report detailed that — although there has been an increase in demand for mental health resources — university system’s institutions varied in how they provided the resources to their students. These findings inspired Valentino-Smith to sponsor the bill.

“It was important to put together a high level task force … so that we in the General Assembly could start to look at policy recommendations, barriers, fiscal needs to address what looks like a very significant problem for our students in terms of timely access to quality mental health care,” she said.

The bill would require the task force to release an interim report of its findings by Dec. 1 and a final report one year later. It would go in effect June 1 and last two years.

Kelly Sherman — the SGA’s health and wellness director — said that though she wishes there was greater student representation on the proposed task force, she believes it is a good step forward.

“I was kind of concerned that this wasn’t already in place,” the junior public health science major said. “It’s an amazing task force where people from across the state of Maryland could just analyze what’s the best practices for preventative and treatment care for mental health issues.”

Valentino-Smith acknowledged that this particular legislation would not specifically cause any changes to be made on college campuses, but she hopes the group’s findings would prompt more legislation.

“The goal is to make sure that we in the General Assembly receive a high level, well informed evaluation,” she said, “to ensure all of the institutions of higher ed are in a position to offer quality mental health care to the students.”