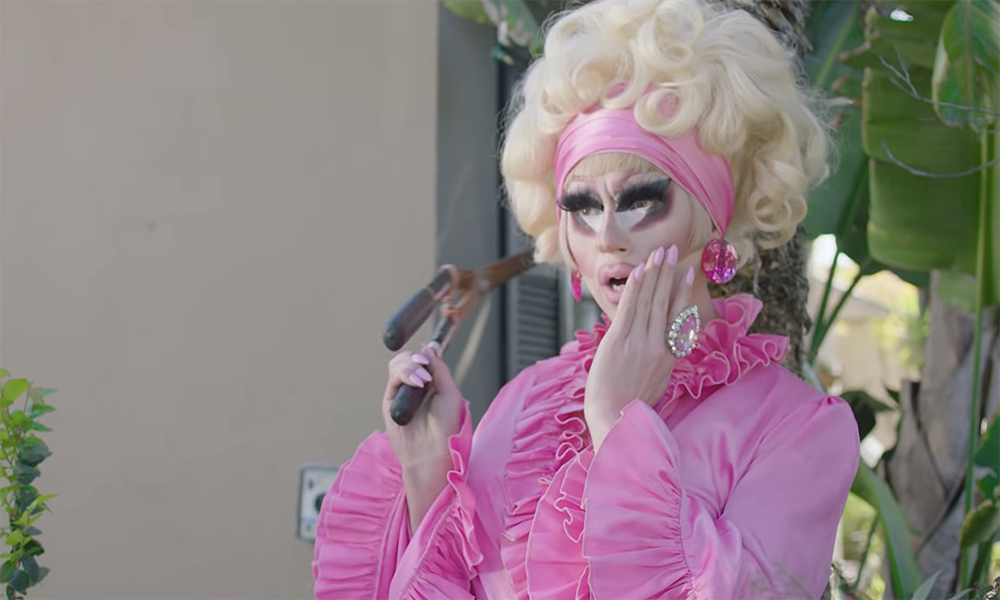 Trixie Mattel in the 2018 music video for "Break Your Heart." (Photo via YouTube)

The amount of RuPaul’s Drag Race content dropping in 2020 is borderline absurd. But, guess what? I’ve never been more ready for anything.

With season 12 premiering last week and a new All Stars season on the horizon, there’s already a lot to discuss. But, there’s more to drag than what you see on TV.

Many Drag Race alumnae go on to have some hefty success in music careers. Don’t forget that RuPaul’s hit song “Supermodel (You Better Work)” peaked in the upper half of the Billboard Hot 100 in the heyday of the ‘90s.

So, while there are certainly boatloads of more songs out there by fabulously talented drag performers, this list unfortunately sticks to songs by past Drag Race contestants. Call me sheltered, I guess.

Here are some of the most enthralling, invigorating song suggestions I now willingly bear upon you, reader. My gift to you:

“Read U Wrote U (Ellis Miah Mix)” — RuPaul, featuring the cast of season 2 of RuPaul’s Drag Race All Stars

I hate to start with this one because it really doesn’t get much better than this masterpiece. But, here we are. This song was the first group number from the final four of any season, and the reason there’s been the same challenge in every season since is because of how amazing this one was. With killer verses from RPDR legends Alaska, Detox and Katya, you almost won’t be able to clock that they aren’t seasoned rappers on their own. And the final verse by Roxxxy Andrews is just so goddamn unbearable, you almost grow fond of it, like a spider nestled in the corner of your ceiling. And the video just makes the number eons more unbelievable.

[Read more: BTS miss the top spot, but start to threaten ‘The Box’]

If you didn’t know how to command a runway before, Ms. Smalls will teach you on this synth-pop delight. With the undeniable sense of momentum and simplicity of lyrics, this jam could easily be heard in the background of any fashion show. And when in doubt, just listen to Naomi and “give ‘em a little bit of ass.”

Drag doesn’t get more plainly charming and simultaneously nonsensical as Monique Heart. On its own, the phrase “brown cow stunning” makes less than zero sense, but one listen to this song, and “stunning” will never feel like enough again. While queens trademarking their silly quips can often become tired and worn-out quick, Monique’s carefree attitude and solid vocals to back display the correct way on how to capitalize on what you already got.

Although Trixie Mattel is a controversial figure in the Drag Race realm, there’s no denying her prowess as a musician. Branding herself as a drag folk artist, she brings two spheres of art that you’d never think would mesh well, but somehow do. “Break Your Heart” is a classic kiss-off track that has the do-si-do sound you could find in any Tennessee backyard. Trixie sidesteps the blame for any harm she may have caused, but can’t promise she wouldn’t do it again.

Before I get into this song, let me just provide the disclaimer that the trio behind this song came out with the only triple win in Drag Race history. The premise: Baga Chipz, Blu Hydrangea and Divina de Campo are a girl group, and this song is their final performance before a messy parting of ways. This song is greater than the perfect storm — perhaps a perfect hurricane? Baga’s vocals are jarringly stunning, Blu’s lyrics are zany in the stupidest, most fun way possible and Divina’s whistle tones give Ms. Ariana Grande a run for her coin. It’s no mystery that this song reached number 35 on the UK Singles Chart.