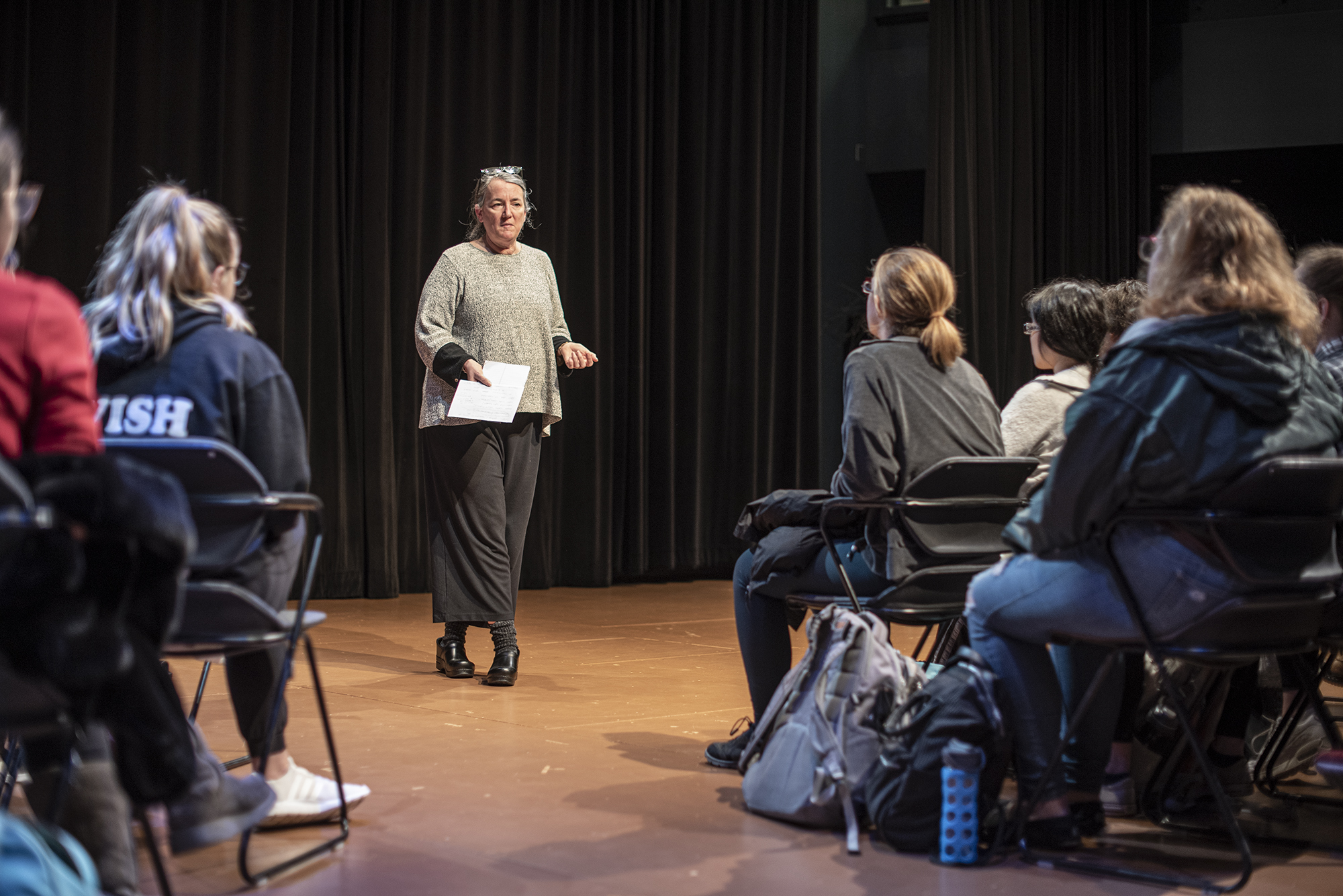 Maura Keefe, associate director of the school of theatre, dance, and performance studies, speaks to students at a discussion on a required course for theatre and dance students at The Clarice Smith Performing Arts Center on Feb. 26, 2020. (Eric Harkleroad/The Diamondback)

After theatre and dance students voiced their concerns about a time-consuming mandatory course last month, administrators are looking to implement changes to the class.

At a town hall in the Clarice Smith Performing Arts Center on Feb. 26, students shared their experiences with and questions about TDPS479, a class aimed to teach students real-world technical skills that some say is too demanding for the one credit many of them earn for taking it.

After the meeting, Leigh Wilson Smiley — director of the theatre, dance and performance studies school — said it was “exciting” to think about making changes.

“These are not hard changes,” Smiley said. “I’m confident that it’s going to be pleasing for the students and future students as well.”

Some attendees at the meeting said the class taught them more than they expected, leaving them excited about applying the skills they gleaned from it in future jobs. Others detailed confusion over what exactly the requirements were, while others took issue with how the class’s structure prevented them from working for a few weeks, or the toll it took on their mental health.

Smiley called the meeting after a Feb. 17 article in The Diamondback detailed students’ frustrations with the class’ high time commitment and low number of credits. Students at the town hall echoed similar concerns, while also recognizing benefits they’d pulled from the course — whether that was skills they gained, or just a greater understanding of crew roles.

[Read more: Some UMD theatre, dance majors want changes to a required course they say is too demanding]

At the meeting, students offered ideas for solutions, too: Maybe pushing underclassmen to take the course earlier in their college education, when they would ideally have more free time and fewer outside professional obligations, would help. Or, perhaps the requirements needed to be communicated more clearly in meetings or emails that outlined expectations.

Some also suggested the course itself needed to change, whether that meant cutting down its required hours, increasing the number of credits students could earn for taking it or some other solution that would better accommodate students’ schedules and their own unique circumstances.

That’s what a four-member task force is set to figure out in the coming weeks.

Smiley said the task force is expected to meet this week and ultimately submit their recommendations to her before spring break. The school hopes to implement changes in time for the fall semester, she said.

The town hall was “fabulous,” Smiley said. Though she said she wasn’t aware of students’ concerns about the course until she read a story about them in The Diamondback, she loved the opportunity to talk to students and hear their feedback.

The task force will be reviewing “credits, hours, learning outcomes, everything,” Smiley said, and people can send suggestions, recommendations and questions via email, put them in a suggestion box or place them in her mailbox.

Edima Essien, a junior theatre major who attended the town hall, said the meeting was “very effective” in making people aware of the situation, but left her unsure about what would be implemented moving forward. She said it was “great to hear” something would be changed by the fall.

As a junior who is taking her third credit of TDPS479 — theatre majors have to take four credits of the course, while dance majors take two — Essien wonders how shifts in the class would affect students like her.

Ryan Coia, a senior theatre major who mostly does backstage work, said he’s learned “invaluable skills” through his classes at the University of Maryland, such as managing schedules and people and how to program a light board. TDPS479 is a good course, he said, though he felt the amount of credits students get as compared to the amount of hours they work was “a little imbalanced.”

“That’s the only thing that really needs to change,” he said.

One of the students who originally came forward with concerns about the course, Lucy Taylor, said she appreciated the task force that has been assembled, and that administrators got to hear student feedback at the town hall.

She thinks TDPS479 can be “very helpful” for people who can handle it, but emphasized that students have different needs. Not everyone’s “brain and body is good at stuff like that,” she said, also referencing when she spoke at the town hall about her experience taking the class as a student with ADHD.

Taylor would like to see students have the choice about whether they’d want to continue with the course after taking TDPS479 for the first time, and see some sort of individual advising meeting be implemented for the class.

“I still have the same concerns,” she said. “Maybe the task force will have really good ideas, but will they be able to implement them all? I don’t know, I genuinely don’t know.”