Review: of Montreal brings their maximalist music to the 9:30 Club 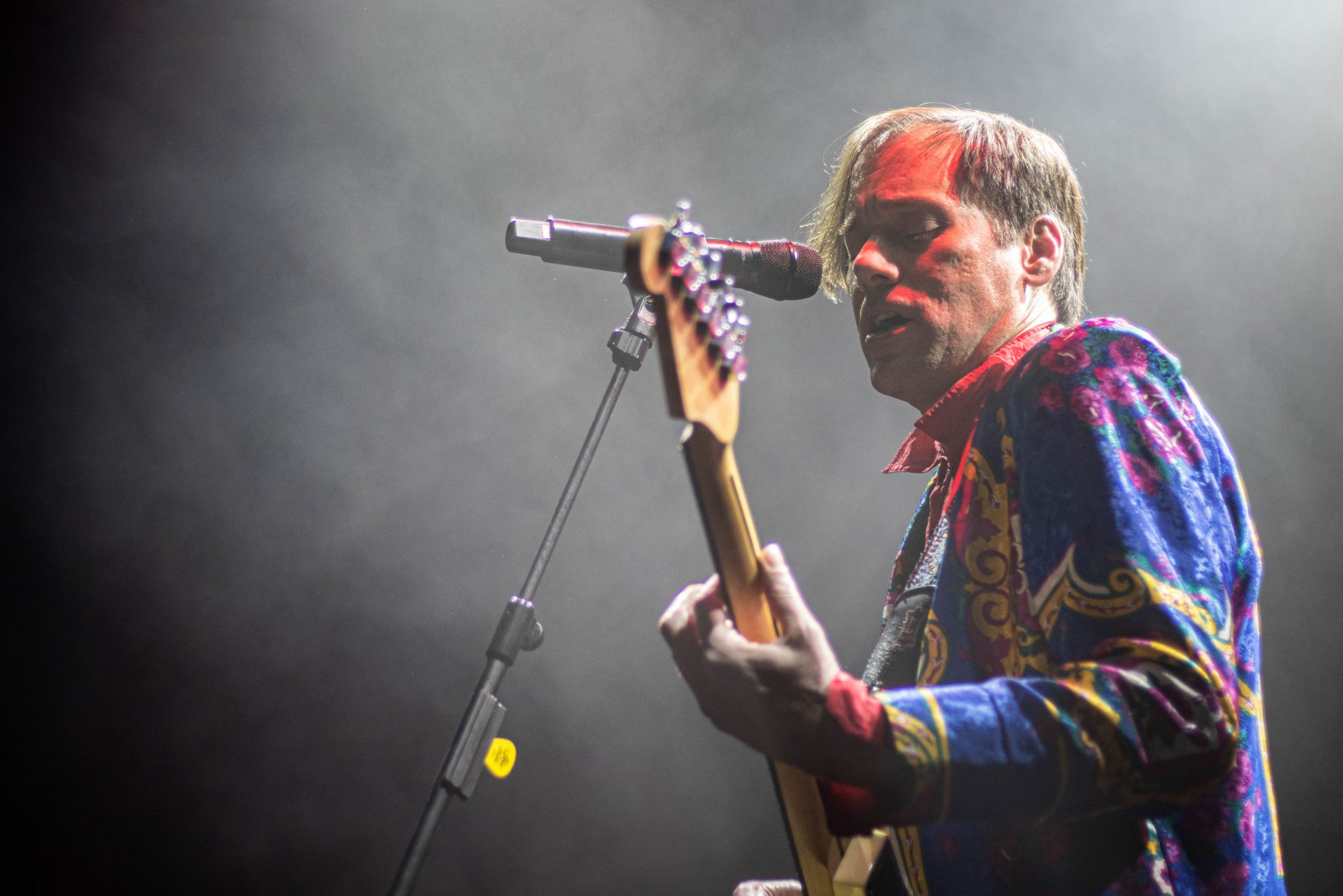 Kevin Barnes, the singer and songwriter for the indie rock band of Montreal, plays his guitar at the group's concert at the 9:30 Club in Washington, D.C. on March 2, 2020. (Julia Nikhinson/The Diamondback)

I showed up to the 9:30 Club at 9 p.m. after a day filled with work, classes and extensive stress about my upcoming schedule. If my brain wasn’t fried before then, of Montreal certainly fried it for me.

Formed in Athens, Georgia, by Kevin Barnes — the frontman and only consistent member — of Montreal quickly became associated with the Elephant 6 collective, which churned out whimsical, sonically dense rock music for the better part of the late 90s and early 2000s.

Much like fellow Elephant 6 bands Apples in Stereo and Neutral Milk Hotel, of Montreal creates their own world; albeit, one far trippier than their counterparts. Considering that NMH’s most famous album is a lo-fi folk-punk fever dream about Anne Frank that drove creator Jeff Mangum completely out of the music industry, that’s saying something.

Wikipedia wants me to believe the band belongs in the genre of indie pop, but their sound, especially in a live setting, is way too intense for the twee sensibilities of indie pop. Of Montreal’s music — part alt rock, part electronic and very psychedelic — is an audio onslaught. More is always better for Barnes and company, with different melodies, rhythms and textures wildly careening in their songs. The minute you feel like you’ve got a grasp on the current song, a new instrument or key change flies in to keep you on your toes.

A number of cuts from the band’s most recent release, UR FUN, found prominent places in the setlist. Among them were opener “Peace to All Freaks” and “Don’t Let Me Die in America,” in which Barnes wonders, “Have I lost my country / because I have no love for piggy-piggy fascists?”

Most of UR FUN is more conventional in terms of instrumentation and production than previous of Montreal releases. Does that mean Barnes has mellowed with age? Not if their live show has anything to say about it.

[Read more: Review: Post Malone owned Capital One with nothing but himself and his music]

With strobe lights, projections, large skeleton props and dancers that changed costumes with every song, of Montreal took their maximalist aesthetic to the people Monday night. More often resembling a rave than a rock show, sparkling sequin and day-glo outfits were a common sight throughout the crowd and onstage. Barnes strutted out at the start of the set with a light-up feather boa, dancing maniacally throughout the night as flashing lights and pounding rhythms brought the audience into a trance.

The energy only seemed to grow as the concert went on, culminating in a four-song encore featuring a cover of Nirvana’s “Breed” as balloons bounced around the venue. Mosh pits and glitter both found a home in the 9:30 Club with this group.

This band is the kind whose bones are made by their live show. Of Montreal has put out 16 studio albums since 1997, but none of their songs ever broke through to a wider cultural status. Instead, the band brings their music to the people by playing shows almost nonstop, having done so for the past 20 years.

Their show at the 9:30 Club was their fifth show in five days, and the band won’t have a day off for almost two weeks. That kind of workload is difficult to maintain — but if last night’s show was any indication, of Montreal should be up to the task. The songs were electric, the crowd was eclectic and Barnes was eccentric as ever.