“The exhaustion is worth it”: College Park firefighters battle rare consecutive home fires 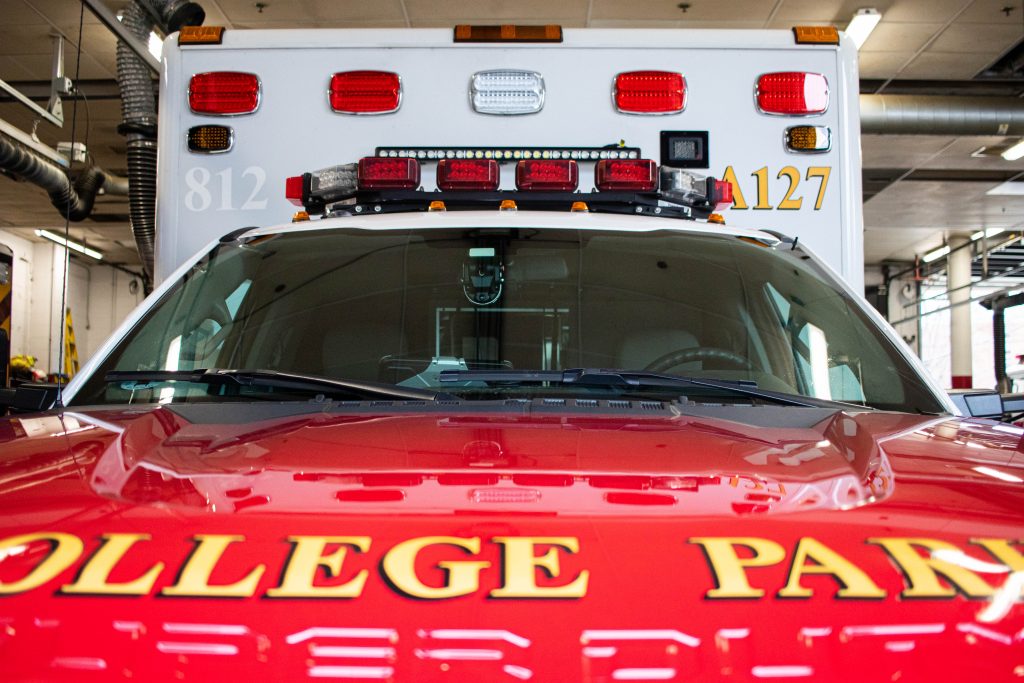 The College Park Volunteer Fire Department raced to the scenes of two house fires in mid-February, ones firefighters say they successfully extinguished without civilian injuries.

Two house fires within 24 hours are both unusual and tiring, firefighter and EMT John Dattilio said. The proximity of the fire station to the University of Maryland, a school that prioritizes fire safety, means College Park firefighters do not often receive consecutive reports of house fires.

College Park firefighters have to balance priorities such as work and education, all while fighting back-to-back fires — like the Feb. 15 blaze in College Park, and the Feb. 16 one in Hyattsville. However, their close bonds make the long days and nights worthwhile.

“I went to figure out where I wanted to go to college — I wanted to do some place where you could actually live at the firehouse, but also go to school — and I found the University of Maryland is a pretty good school,” volunteer firefighter and junior Jake Melcher said. “Also, the College Park Fire Department is the busiest place you can be if you want to live in the firehouse and go to school. So, it’s kind of a no-brainer.”

The first house fire occurred in the 4800 block of Erie Street, where a room toward the front of the house was engulfed in flames, Dattilio said. The fire was reported by a neighbor around 11 a.m. No one was injured, he said.

Melcher said he could see smoke hanging in the air and fire blowing out of a bedroom window of the house from the fire engine.

Melcher went into the two-story house carrying a halligan and an axe to break down any doors or barriers that might obstruct firefighters from extinguishing the fire. He said burning homes tend to fill with black smoke, and he typically uses the heat of the fire to find the source.

Dattilio said the team was able to put out the fire in about two minutes. The cause of the fire is unknown and the investigation is ongoing.

The second house fire, which was called in around 8:30 a.m. the next day, occurred in the 2100 block of Rolander St. The house was empty when the fire was reported and no one was injured, Melcher said.

There was an explosion in the house, which led to a gas-fed fire in the basement, Dattilio said. However, fire investigators have not released official details about what caused the gas to build up and eventually explode.

Dattilio said the impact of the explosion damaged the house. A brick wall on the side of the home was blown out from the explosion, leaving debris across the property.

“There was glass in the road,” he said. “Both of the windows were blown out and there [were] two windows laying in the street.”

Dattilio said firefighters put out the second house fire in under 10 minutes. Due to the magnitude of the explosion, Melcher said firefighters were worried the structure of the home might collapse, but it did not.

[Read more: Fire safety conference brings researchers from across the globe to UMD]

Adam Quiat, a College Park volunteer firefighter and fire protection engineering graduate student, said fighting two fires in 24 hours can be physically draining. Firefighters carry 70 to 80 pounds of gear on their bodies, which leads to exhaustion, he said.

“You certainly feel just a little wider, like you’ll try to turn around in a hallway and you’ll notice yourself bumping into a wall,” Quiat said, in regard to wearing firefighter gear. “If you’re going up steps, you’ll really notice all of the weight.”

Dattilio said that after fighting consecutive fires, gear can get wet, making it even heavier. Melcher had an extra set of gear for the second fire, but he said not everyone was as fortunate to have a change.

“[Fighting two fires] is a little exhausting, but everyone is here for the same thing — and I don’t want to say we love to do it,” Dattilio said. “But it’s what we’re here for. The exhaustion is worth it for us.”

Quiat said the typical shift begins at 3 p.m. with a staffing check. The firefighters check their apparatuses to make sure everything is in place and working as normal, he said. Then, they wait for a call.

“What’s nice is that since we’re at the fire station, we live there,” Quiat said. “We kind of go on with our normal lives as we would: working out, cooking, cleaning — anything like that — doing school work.”

Despite being both a student and a volunteer firefighter, Melcher said he is able to maintain a balance between work and school.

“The good thing about our firehouse is that they take school first and then firehouse second,” Melcher said. “So if you really need a study or you have an exam to take or you just need the night off to do homework, that’s completely acceptable — we can work around that stuff to make sure you do well at school, because there’s no point of you coming down here if you can’t do well in school.”

Dattilio said working in the firehouse also creates a strong brotherhood. Quiat said the close living quarters and everyday hustle of firefighting brings everyone together.

“Spending so much time with all these people, you’re going to grow close and you’re going to learn about them all and what makes them tick,” Quiat said. “It’s like living in any house with a bunch of people … except, I guess, you’re with them a lot more, I would say, in different situations that you might be able to bond over more so than others.”

Maddie Walstrum, a volunteer firefighter EMT, described the department as a family.

“It’s similar to the military where you start out — you’re at the bottom,” the sophomore environmental science and policy major said. “At first, it’s very training-heavy, but once you get through that, it’s very much like you are part of the family and it’s a really, really cool transition.”

Walstrum is one of only two female volunteer firefighters in the department. However, she was not at either of the back-to-back fires last month.

“There are some stations where … it’s a little bit difficult for women to be, kind of, integrated into the station,” she said. “But here I’ve had no trouble. Everyone’s been very, very kind to me. If I struggled with anything, they’re right there helping me through it.”

Melcher said he is content with his decision to dedicate his college career to firefighting with the department, despite the hard work, time and dedication it requires.

“A lot of my friends back home, they all went to college to join frats, but honestly, I have a much more fun time being in a firehouse,” he said. “You get very close with everyone you live with, because you’re also working with them and you have to be on serious calls with them, so you have a high level of trust with all of them — I love it, I think it is amazing.”