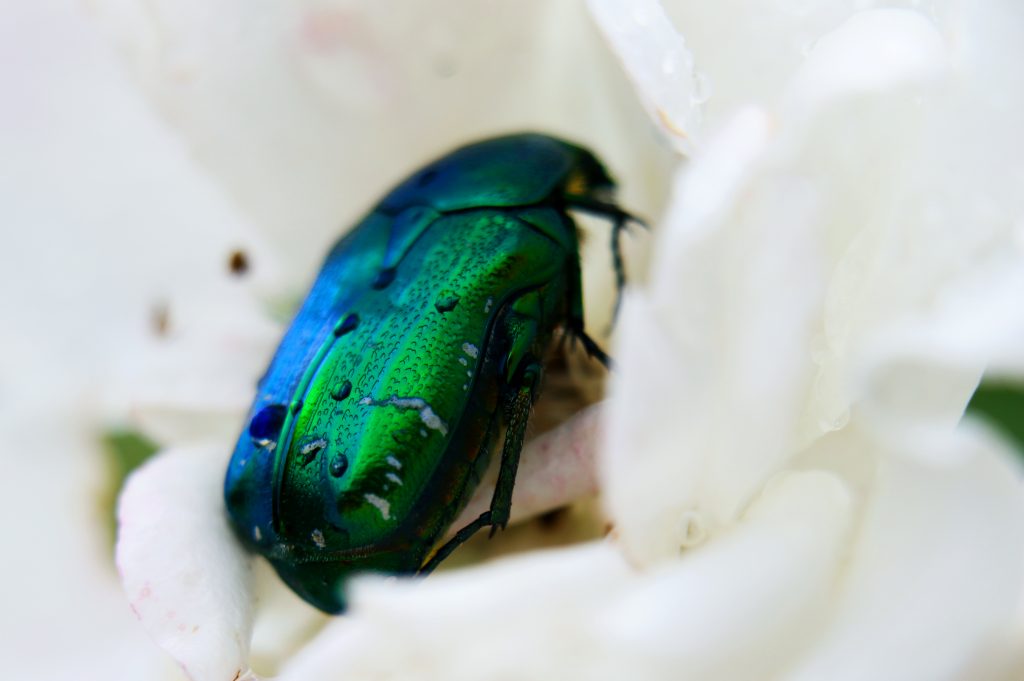 A bug crawls into the center of a flower. (Julia Nikhinson/The Diamondback)

In light of recent complaints filed against the University of Maryland for reported mistreatment of guinea pigs, students and alumni may be wondering what other kinds of animal cruelty might be taking place on college campuses. Perhaps activists should spend time looking into the treatment of insects in their school’s entomology departments.

I do not pretend to be an expert on the difference between Hemiptera or Insecta, nor on the distinction between use of the words “bug” and “insect.” (For this reason, I will refer to the subjects of entomological study simply as “insects” and pray the bug people do not come after me.)

What I do know is that many animal rights activists already boycott products such as honey and silk, which require the farming of bees and silkworms, and that that outrage should be extended to all insects.

Silk is produced by commercially breeding silkworms, which produce it as a part of their cocoons. Sericulture is the process by which these worms are fed and farmed and then killed (typically through steaming) while in the chrysalis stage of development, so that the fibers of their cocoons can be spun into fabric for human use. The similarities between steaming worms alive to spin their cocoons into clothing and making fur coats — a far more commonly cited example of animal cruelty — are quite obvious.

Meanwhile, bees are also a significant focus of activist campaigns. In the past few years, it has become very popular to care about bees — for good reason. With bee populations dying out, vital crops humans and animals alike use for food will go unpollinated. Industrial bee farming is known for a variety of behaviors harmful to bees (as with any domestication or breeding process). In particular, breeding bees to produce more honey can reduce genetic diversity in bee populations, leaving colonies more susceptible to disease.

But bees are only one example of the detrimental effects of insect farming. Other insects are farmed around the world, with little advocacy effort made for decent treatment.

Per the Vegan Society, vegans and animal rights activists abstain from the consumption of honey not only because of the act of breeding bees, but also the over-harvesting of honey and its replacement with sugar water for the bees. There is comparatively little focus on the consumption of other products produced from the suffering of insects.

At this university, BSCI481: Insect Diversity and Classification, a course required for graduate students in the entomology department, lists the capturing and killing of insects as the main component of students’ final course grade.

A fall 2016 syllabus for BSCI481 states that “120 properly preserved, identified and labeled hexapod ‘families’” are required per student and that collecting and preserving specimens makes up 75 percent of the overall course grade. Surely the preservation and pinning of large numbers of insects for study is not specific to the university’s entomology department, but rather common everywhere.

So why does no one seem to care? Is it a question of consciousness? Of brain size? Why do activists steer away from bivalves and fail to fight for insects equally?

While I do not intend to condemn scientific research of the natural world, the focus on cruelty toward insects must be more balanced. The controversy bees and silkworms inspire should not be the only outrage we feel, and we should strive to treat insects more fairly within our institutions and regular lives.