A new UMD major focuses on the development of Christianity, Judaism and Islam 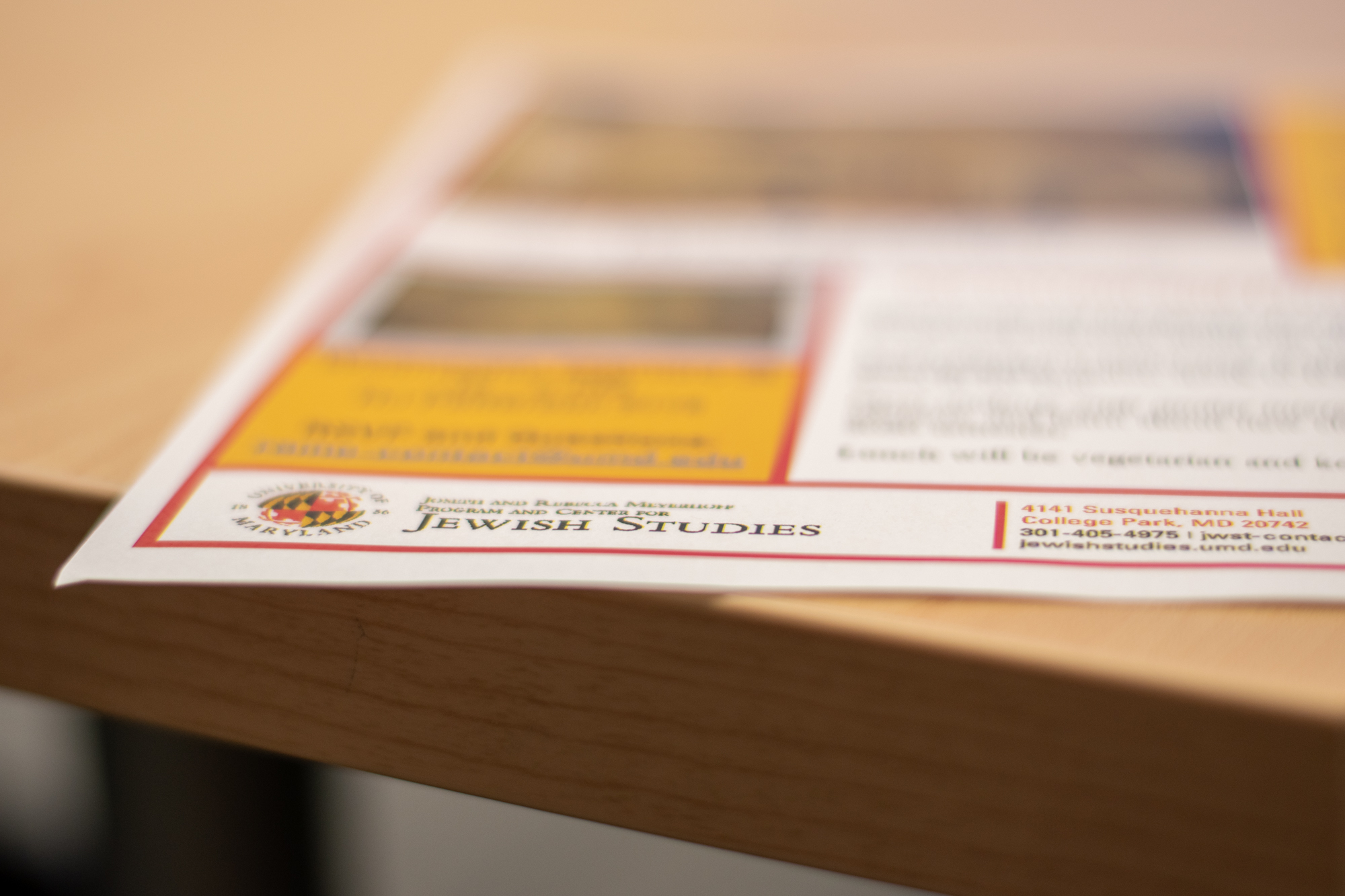 A flyer for the new Religions of the Ancient Middle East major sits at the lunch meet and greet for the major on Feb. 26, 2020. (Joe Ryan/The Diamondback)

University of Maryland students are now able to enroll in a new major from the Jewish studies department — the school’s first-ever degree program to focus on multiple religions.

The Maryland Higher Education Commission approved a major focused on religions of the ancient Middle East in January. That marked the end of a two-year review process for Hayim Lapin and Maxine Grossman, the two Jewish Studies professors behind its development.

The Joseph and Rebecca Meyerhoff Center for Jewish Studies first began offering a religious studies minor in 2001, said Grossman, who leads the program. But in recent years, Grossman and Lapin found that more and more students held specific interests when it came to religion, and that the minor, with a few electives spanning a broad range of cultures and time periods, couldn’t provide a coherent, specialized approach.

Students were looking for more structure in their studies, said Grossman, but without a major, they weren’t able to find it. In the past, some students turned to the Individual Studies Program to create their own form of a religious studies major.

[Read more: For the first time, UMD students can declare a minor in disability studies]

The 30-credit program will provide students with a background of the historical and cultural context that led to the emergence of ancient Judaism, Christianity and early Islam between 850 CE and 1200 CE and 850 CE. Students will also be able to explore the methodological aspects of historical research, including archaeology and economic modeling.

“The first step was to recognize that there is a real interest on campus and take advantage of that,” Lapin said.

Anticipating that many students would enroll in religions of the ancient Middle East as a second major, the department wanted to keep credit requirements at a minimum. It’s a way for students to learn more about a subject that interests them, even if that subject doesn’t correspond with their future career, Lapin said.

In fact, Grossman said, a lot of the students who expressed interest in the major on a survey last fall came from STEM and business fields.

Many other state universities, such as the University of Virginia and the University of Florida, have religion departments that include courses on Judaism. A Jewish studies department that offers a major focused on other religions is a bit of an “inside out” structure, Grossman said.

But in the absence of an overarching religion department, Jewish studies over the years has become a default for all things religion, Lapin said. The department already offers classes on Christianity and a minor in Middle East studies. Students can take Arabic language courses through the department as well.

Though expanding Jewish studies into a larger religious studies department to reflect this shift is a question for “further down the road,” Lapin didn’t dismiss the possibility.

“Right now it’s really just providing the administrative umbrella in which this takes place,” he said.

Students began the process of declaring the major after a kickoff event Wednesday, and those with enough credits may be able to complete their degree as soon as next academic year.

Jared Bennett, a sophomore English major, plans to switch from his religious studies minor to the new major, which allows him to take a more focused look at the various religions he’s already studying.

“It’s a lot more useful than just saying like, ‘Oh I took a bunch of classes in religion but I don’t have anything specific to show for it,’” he said. “Now it’s a B.A.”

Neil-Peace Tebid, a freshman English major, has always been interested in the religious side of her history courses. She said the new major would allow her to take advantage of that interest.

Plus, the cultural awareness she’s gained from these classes will also be an asset when she travels abroad in the future, she said.

“I want that awareness, to be able to respect someone else’s opinion and conviction, because it does move a lot of what they do culturally,” Tebid said. “In studying a lot of different religions, you gain a lot of perspective that’s helpful in actually interacting once you go out.”