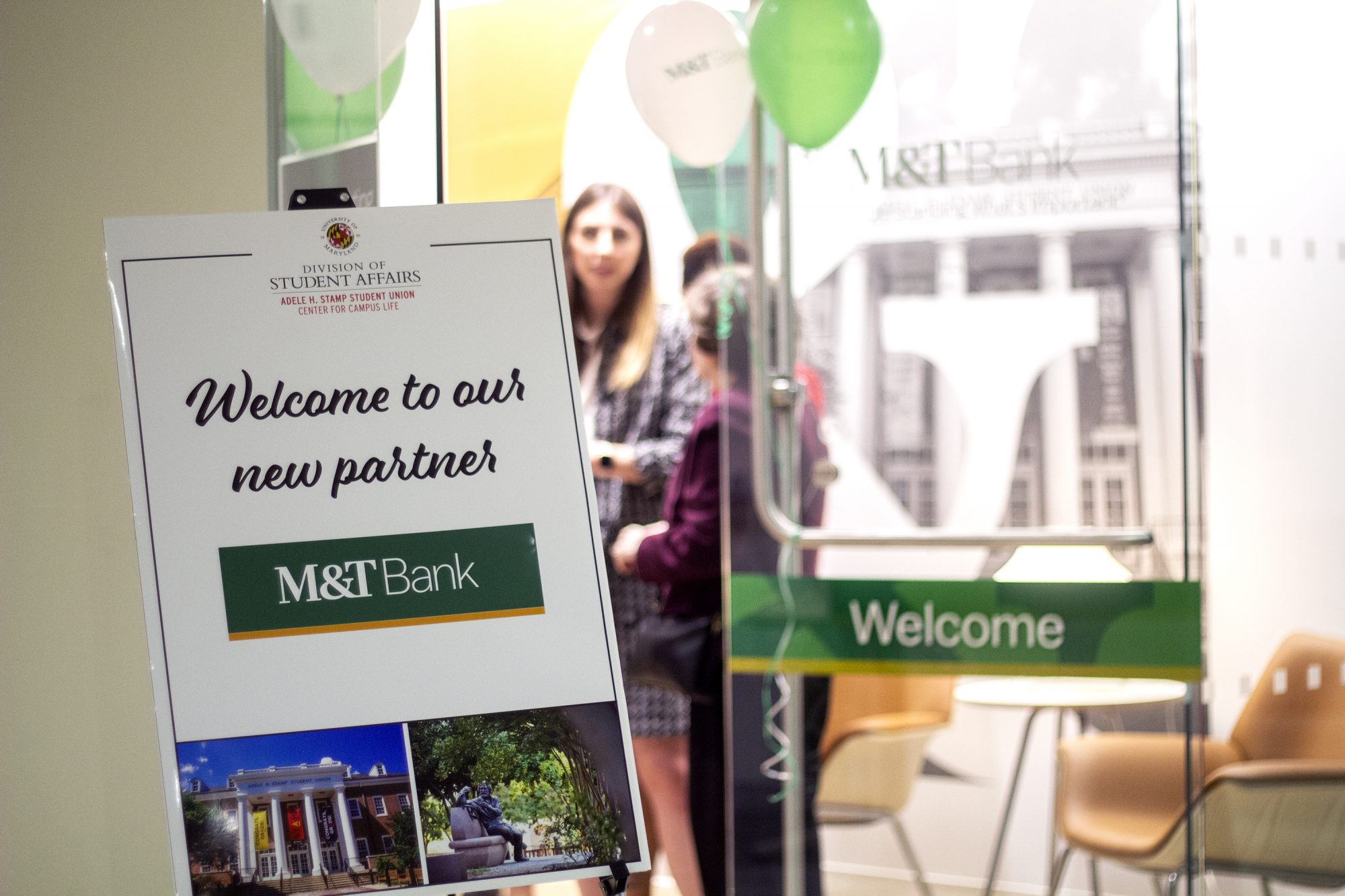 M&T Bank had a ribbon cutting ceremony to announce the opening of their new location in Stamp Student Union on Feb. 25, 2020. (Julia Lerner/The Diamondback)

After a semester of construction, M&T Bank is officially open for business at the University of Maryland’s Stamp Student Union.

Officials from M&T and the university gathered Tuesday inside Stamp to celebrate the inauguration of the bank’s new branch, which marks its first on a Maryland college campus.

The branch was designed with input from 700 interviews and surveys M&T collected from students, parents and alumni in August, said Robert Wehner, the bank’s retail market manager.

“Students want to feel comfortable,” he said. “At our core, we’re a community bank. A fundamental tenet of M&T is that when the community does well, we’ll do well.”

Read more: [After a year delay, M&T Bank will replace Stamp’s Capital One]

Before construction started on the branch in the fall, the space it now occupies on Stamp’s ground floor had sat empty for a year. Capital One — the bank that previously operated in Stamp — left this campus after its contract ended and was not renewed in August 2018.

M&T will also contribute to renovating the Harriet Tubman room located on Stamp’s second floor. M&T will use this space to offer free financial education workshops — which have already begun — to faculty, staff and students, according to a press release from the bank.

To help with the renovation, Wehner said M&T is considering partnering with students from design programs on the campus. The workshops will be open to anyone who wants to attend, he said — even those who use a different bank. That’s because M&T’s goal is to help the whole community, he said.

“At the end of the day [everyone on the campus needs] a bank, and they need help thinking about their finances, and we just want to be that resource for them,” he said. “Our contribution is going to be for the university community whether they bank here or not.”

Stamp director Marsha Guenzler-Stevens praised M&T’s willingness to engage with not only the campus community, but also the larger Prince George’s County area and surrounding public schools. The bank provides support and volunteers to programs such as America Reads, America Counts and Partners in Print, according to the release.

Guenzler-Stevens predicted that M&T will be able to help everyone from faculty members looking toward retirement to graduating seniors getting ready to negotiate their first salaries.

“I think part of it is about partnership,” she said, referring to the bank’s relationship with Stamp. “Partnering with an establishment to bring people into the Stamp, to have every day life needs met.”

As the year goes on, Wehner said M&T’s goal will be to get involved in the campus community and chip in when it spots further opportunities to help students, faculty and staff.

“We’re right across from the Student Involvement Suite, so we’re going to keep our ears open,” he said.

The M&T location in Stamp will be open weekdays from 9 a.m. to 5 p.m., and the five on-campus ATMs operated by the bank will be accessible 24 hours a day, according to the release.