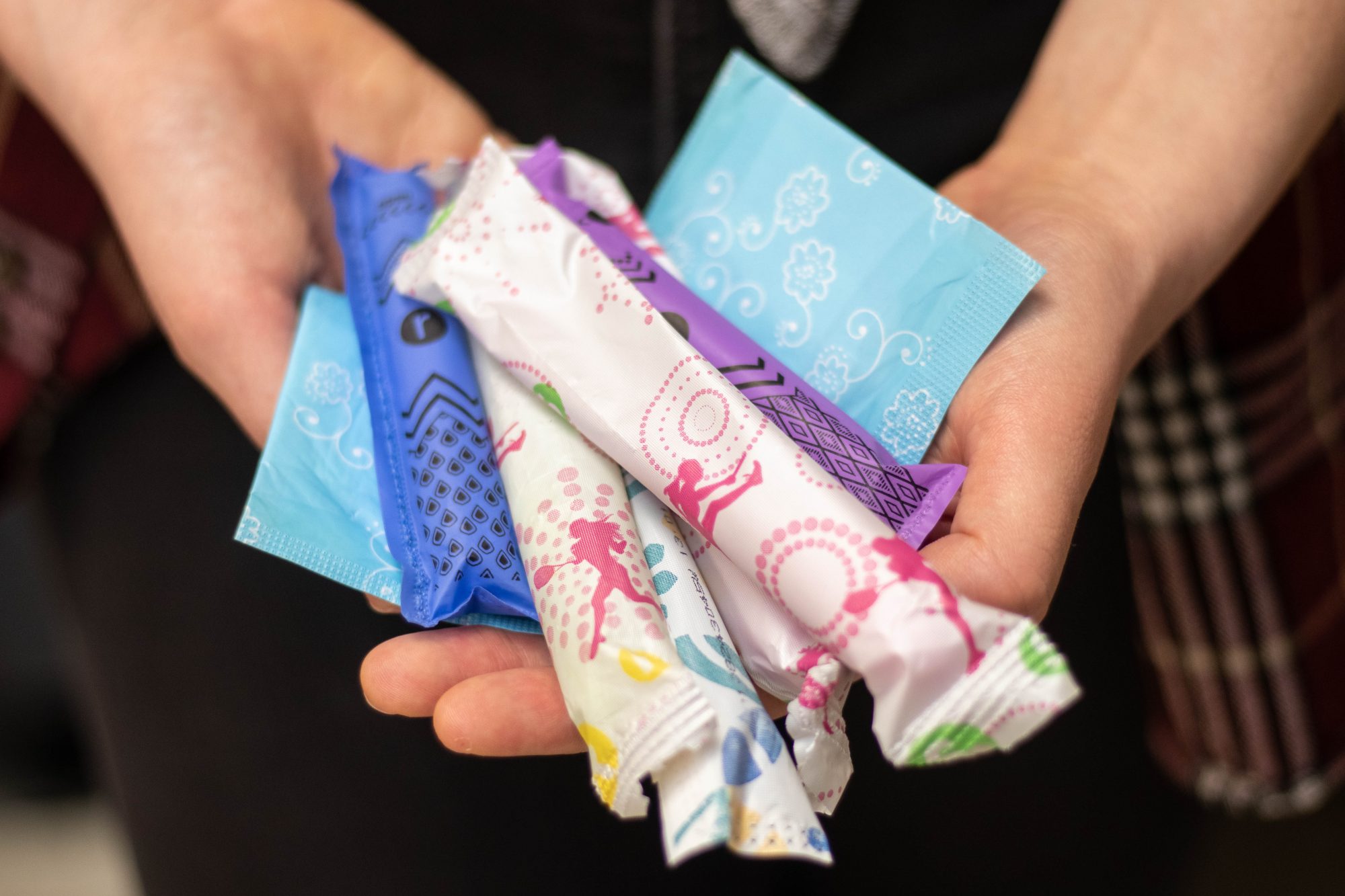 A petition to expand the “Period Poverty Program” got over 450 signatures in two weeks. (Julia Nikhinson/The Diamondback)

By Luciana Perez-Uribe and Eric Neugeboren

When Deesha Ajmera moved into the University of Maryland’s Hagerstown Hall last fall, she wasn’t expecting its bathrooms to offer free pads and tampons.

Then, in December, the dorm’s resident assistants dipped into their event funding to stock every bathroom with free sanitary products. Now, Ajmera wants such a program to become commonplace across the university’s dorms.

“I personally wouldn’t have thought of it, which is sad,” the freshman bioengineering major said. “It’s a necessity, and it’s something that we can’t live without.”

Ajmera is far from alone in her support for the program — in two weeks, over 450 people have signed a petition calling for all dorms on campus to offer free period products.

Doing so would be an opportunity to meet the needs of the university’s diverse student body, said Hagerstown resident assistant Liam McCammon, who started the petition.

Kush Kharod, another Hagerstown resident assistant, first thought up the “Period Poverty Program.” Kharod collaborated with other resident assistants, residents and the Department of Resident Life to get it started.

These efforts build upon a previous push by students to make sanitary products more accessible on the campus. Currently, free pads and tampons are offered in select locations on campus, including the University Health Center and Stamp Student Union.

Last fall, five students requested $18,000 from the Student Facilities Fund to stock 15 of the university’s most highly-trafficked bathrooms with period products for a year. While their request was approved by the committee in charge of the fund last semester, it is still waiting on a greenlight from the Facilities Council.

And in the last 10 days of the fall semester — when Hagerstown’s bathrooms started offering free period products — a total of 20 pads were used, Kharod wrote in a message. Tampons were added to the bathrooms earlier this month, and in the first two weeks, 80 have been used.

Next, McCammon said the hall’s staff is aiming to expand the program to the two other dorms in the Ellicott Community. They eventually hope the program will be expanded to every dorm on campus.

Ajmera hopes free pads and tampons are one day offered in every building on campus.

“If you just randomly get your period, you’re kind of screwed,” she said. “It’s really helpful, knowing that it’s there if you need it.”

Maura Johnston, a freshman psychology major who lives in Hagerstown Hall, joined Ajmera in signing the petition. While she has enough money to buy her own period products, that’s a privilege she recognizes that others may not have.

[Read more: After years of lobbying from residents, Calvert Hills will soon have a new drainage system]

“I know that there are many girls that get their period — that it is a huge finance for them — and they’re unable to have their own supply,” she said.

Nistha Mitra, another Hagerstown resident assistant and an international student representative for the Student Government Association, said she aims to introduce a bill to the body in the upcoming weeks, supporting the dorm’s “Period Poverty” program.

Mitra said she hopes the bill will help students become more aware of the initiative, eventually helping it to expand to more campus dorms. She stressed she was speaking in her role as a resident assistant, and not as an SGA representative.

“It’s a very natural thing and [sanitary products] should be very easily available to everyone, irrespective of their socioeconomic status,” Mitra said.