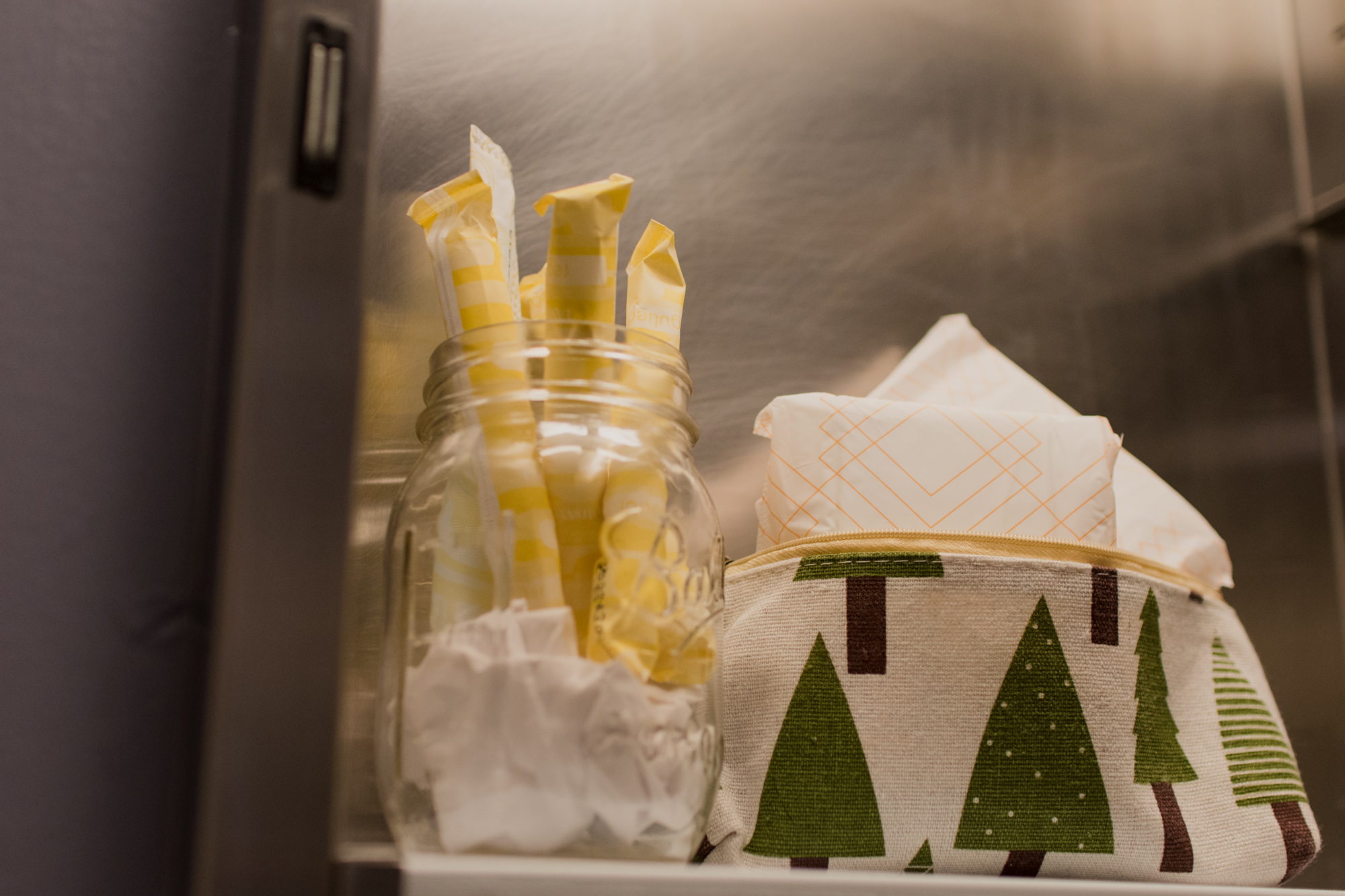 A group of University of Maryland students are pushing to increase the accessibility of free sanitary products. (Gabby Baniqued/The Diamondback)

Back in August, Claire Mudd was in Denton Hall at the University of Maryland, helping students move in, when she realized something troubling.

She had gotten her period. With no friends nearby, the senior accounting major was stuck across campus from her dorm with no products.

“Panic was probably the first thought,” Mudd said. “A lot of stress, a lot of anxiety.”

With no choice but to stick it out, she waited until her lunch break to rush to the Stamp Student Union — one of only a handful of buildings on campus that provides free pads and tampons.

Not only could the university do more to advertise the availability of these products, Mudd said, it sometimes just isn’t an option for people to trek across campus to pick up a pad or tampon if they forgot one.

“It comes down to accessibility,” she said. “To be able to quickly get what you need is so important.”

To alleviate this issue, Mudd — and four other women — are pushing for the installation of free tampon and pad dispensers in 15 commonly-used bathrooms around the campus, taking what began as a class project to the next level.

But it’s not always immediately clear that they’re available at no charge. For instance, Stamp’s bathrooms host dispensers that feature coin slots, even though they don’t actually require payment.

And to pick up a free pad or tampon at McKeldin Library, students must get them from the front desk. Having products available in bathrooms would save students from inconvenience and, at times, embarrassment, said Zoe Weisberg, a freshman marketing major and one of the girls who’s working with Mudd.

She said she’s been in multiple situations where she’s gotten her period unexpectedly and didn’t have a tampon — and she knows others who have too.

“Personally, I’ve been in situations where I’ve been really stressed,” she said.

The stakes are even higher for those who aren’t able to afford to purchase pads or tampons regularly. Over the course of a lifetime, the average woman will spend more than $2,000 on menstrual products, HuffPost reported.

“College students have to worry about so much,” Weisberg said. “They shouldn’t have to deal with like ‘should I buy food or should I buy a box of tampons.’”

The initiative started when the girls were assigned a semester-long project in a public policy class, where they were simply challenged to “do something good,” said Lauren Anikis, a senior journalism major and another team member.

But the group took the opportunity further than they ever anticipated, submitting a proposal to the Student Facilities Fund and sending around a petition to raise awareness and support for their cause. So far, over 300 students have signed on.

Several colleges have made these products free on their campuses. Just last month, the University of Illinois replaced many of their buildings’ dispensers, which previously required payment, with free machines.

Though Anikis said that the group has some concerns about how the project will be funded for future years, she believes raising enough money to promote such an important cause would be feasible.

“This is important, but it’s also possible,” Anikis said. “It does not seem ridiculous to me that there would be money for something so necessary for the day-to-day life of students.”

The group is asking the Student Facilities Fund for $18,000 — a sum that will cover the installation of 15 dispensers and $15,000-worth of pads and tampons, a year’s supply.

To gauge interest in the initiative, the team left baskets of tampons and pads in three bathrooms in McKeldin, the South Campus Diner and the Edward St. John Learning Center. As students exited the bathrooms, they asked them what they thought of the free products. They also recorded how many products were taken.

In addition, they sent out a survey to different university Facebook groups, asking students what bathrooms they used the most. The group settled on placing dispensers in Edward St. John, Knight Hall, Tydings Hall, McKeldin, Hornbake Library and 10 other facilities.

“Periods can be an added pressure for people,” she said. “I feel like it would be really beneficial and I would feel encouraged seeing that.”

As the semester comes to a close, the girls hope to get the program going and then hand the project off to an established club, like PERIOD. @ UMD — and eventually see it expanded to every academic building on campus.

They’ve even had a bunch of students contact them, offering their help after seeing the petition.

After all, Anikis said, menstruation isn’t a choice.

“Our society, the way it is right now, expects … that women can figure it out by themselves,” she said. “Students need this. Girls need this.”