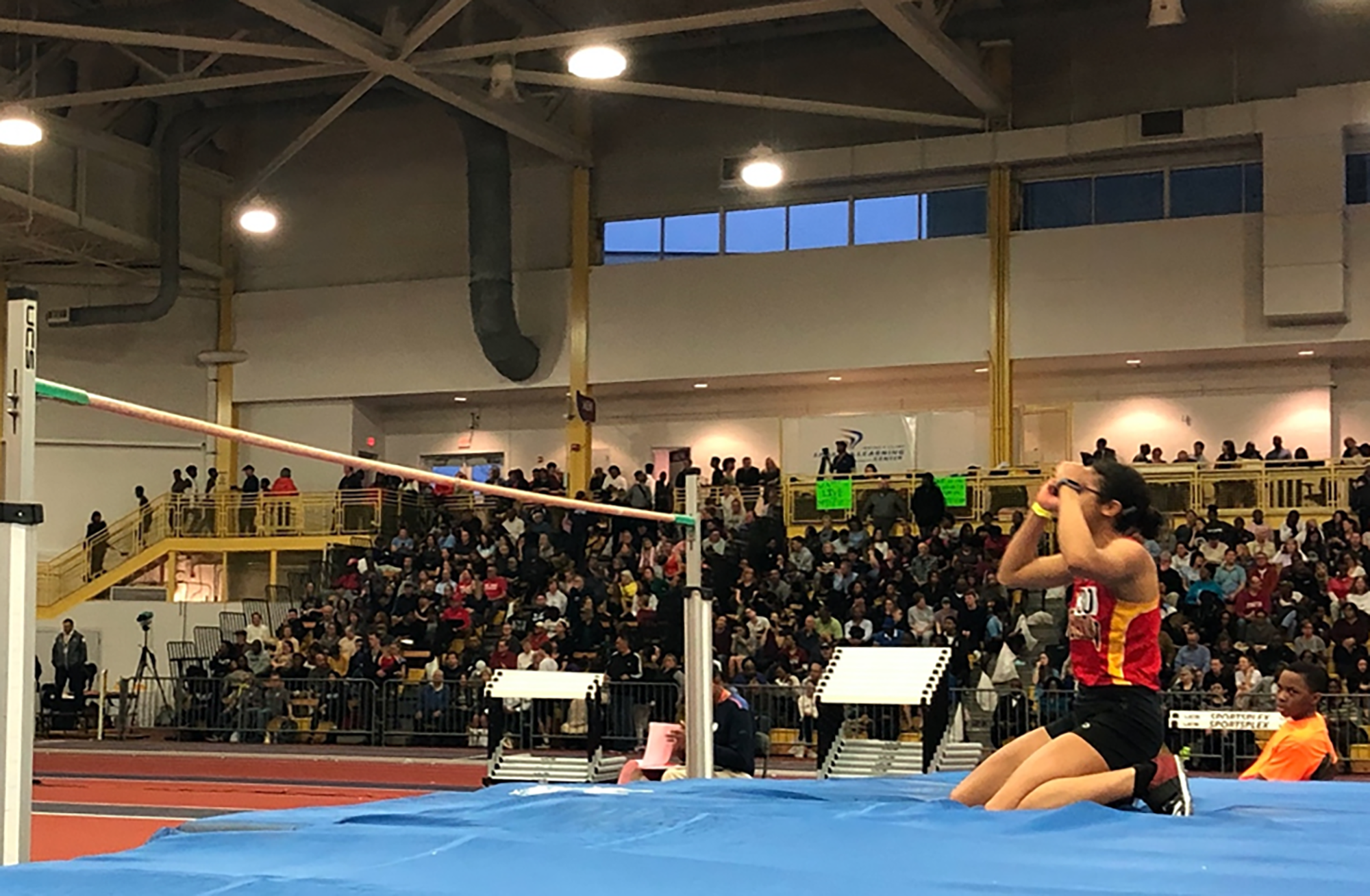 She had won her heat of the women’s 55-meter dash with a time of 7.22 seconds earlier in the afternoon. Then she checked out from the high jump finals to run the 300-meter dash, where she finished third in a lung-bursting 40.27 seconds.

“It feels like hell,” Depry said of the final stretch of the 300. “It’s awful. My legs were, like, honestly, I don’t even know what was happening.”

Returning to the high jump looked like it might be too much to ask, as Depry failed to clear the bar three times at 5 feet, 4 inches.

But no one else had cleared that height either, meaning Depry and Arundel High School junior Maya Murchison were heading to a winner-take-all jump-off — something Depry didn’t even know was possible.

“It was my first time doing it,” Depry said. “It was terrifying.”

Even so, one more opportunity was all she needed. Depry, a Maryland track and field commit, flew fearlessly over the bar on her fourth crack at 5 feet, 4 inches to top Murchison and win her first of two state titles Tuesday.

“I had to clear my mind, which is really difficult to do,” Depry said about putting the misses behind her. “But I just forget about everything else and … focus.”

Wheaton coach Drew Buckingham applauded Depry for powering through the simultaneous events, a feat that requires strategy, in addition to athletic talent and intense preparation.

“[We] try to get in jumps ahead of time, plan around all of our events as much as we can, and milk the clock when you have it,” Buckingham said.

As the field winnowed from its starting size — 30 jumpers on Tuesday — the time an athlete has to jump increases, giving a much-needed breather to those who may have already jumped 10 times or competed in other events.

In the 300-meter dash, Depry started out with a lead before being caught by Caia Gelli, a junior at Richard Montgomery High School in Rockville and Dianna Koger, a junior at Bowie High School. Gelli set a new personal record at 38.89 seconds — missing a 10-year-old state meet record by 0.06 seconds. Koger placed second in the 300 in the Prince George’s County Championships in January.

But Depry got her revenge in the 55-meter finals, running a blistering 7.19 and holding off Gelli’s teammate Diamond Alexander and Koger to double her state championship haul.

With the win, Depry became the second consecutive athlete to claim the top spot in both the 55 and the high jump. Taylor Wright won both events for Northwest High School in 2019 as a senior, after finishing second in the 55 three times.

Depry credited Wright — who is now competing for the University of Miami — with pushing her to hone her skills.

“She was always in front of me in every event we did,” Depry said of Wright, who topped her for the high jump crown in both 2018 and 2019. “But I love that I was competing against her because I don’t think I’d be jumping what I am now.”

Maryland field hockey turned it around in weekend sweep of Rutgers