As Maryland competes, its gymnasts aim to be the loudest support unit around 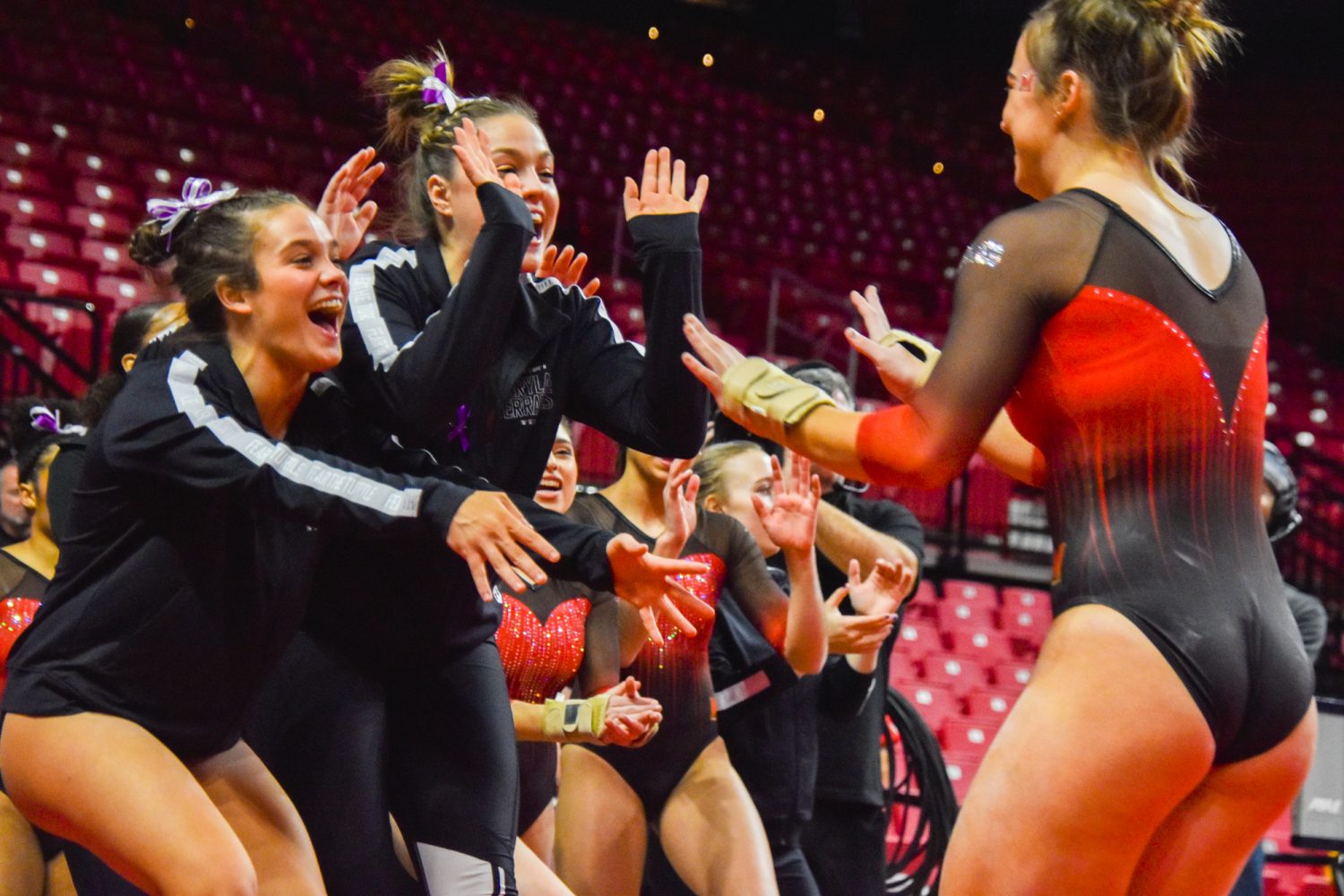 Emma Silberman and her teammates celebrate her performance on the floor during the gymnastics meet against Illinios at Xfinity Center on Feb. 2, 2020. (Joe Ryan/The Diamondback)

Even with a wrestling match happening directly adjacent to its meet on Sunday, Maryland gymnastics found a way to make some noise in Xfinity Center. The team emphatically fed off the crowd’s energy all afternoon, especially when it surpassed 49.000 on floor.

Averaging a 195.783 at home this season, the Terps have channeled the support from their fans into success. So when Maryland goes on the road, the squad wants to imitate that atmosphere, raising their voices in an attempt to be louder than their opponent.

Midway through the season, Maryland has reminded itself of one of its goals this year before heading to its largest and most important meet of 2020 — the annual “Big Five” competition.

“We have a list of team goals in the gym, which they picked,” coach Brett Nelligan said. “One of them is that they want to be the loudest team in every competition they’re at.”

[Read more: With a contingent of hometown fans behind her, Tiara Wright dazzled for Maryland gymnastics]

This Saturday, Nelligan’s squad will travel to Toledo, Ohio, to take on four other Big Ten squads, including two top-25 teams. Last year, the Terps came in fourth place behind Iowa, Nebraska and Penn State.

The meet pits Maryland in the same gym as four other squads for the first time this campaign. While the team has competed twice in three-team meets, averaging a score of 195.700 in those contests, the Terps expect it to be a challenge to be the loudest.

“It’s not about the other teams, it’s about us,” Nelligan said. “We compete better when everyone is involved whether they’re competing in that event or not. When we’re pushing all of our energy toward the person who is competing, we always do better.”

Being loud and cheering for teammates is more natural following a couple of strong routines, but Maryland makes a concerted effort to show high energy before and after every routine. The Terps did so last Sunday against Rutgers, pumping up senior Tiara Wright for her 9.825 on bars right after sophomore Sanya Glauber fell during her routine.

Maryland believes being louder than its opponent can push teammates on to higher scores. But the team also consistently roars in the hope that the judges take notice, too.

“It can have a really big effect,” senior Alecia Farina said. “Not only will it be helping the team, but when the judges see that we’re having a good time, I feel like that can make a difference too.”

Going forward, the Terps are trusting that their boisterous encouragement of their teammates in practice will help them during competitions. And after seeing the effectiveness of their noise at home, they now see their energy as a strength on the team.

“Everyday in the gym, we’re always cheering for each other and making sure we’re pushing each other as hard as we can,” sophomore Alexsis Rubio said. “I think that’s what makes us a strong team.”