Maryland men’s lacrosse’s young defense stepped up to ignite a comeback vs. Penn 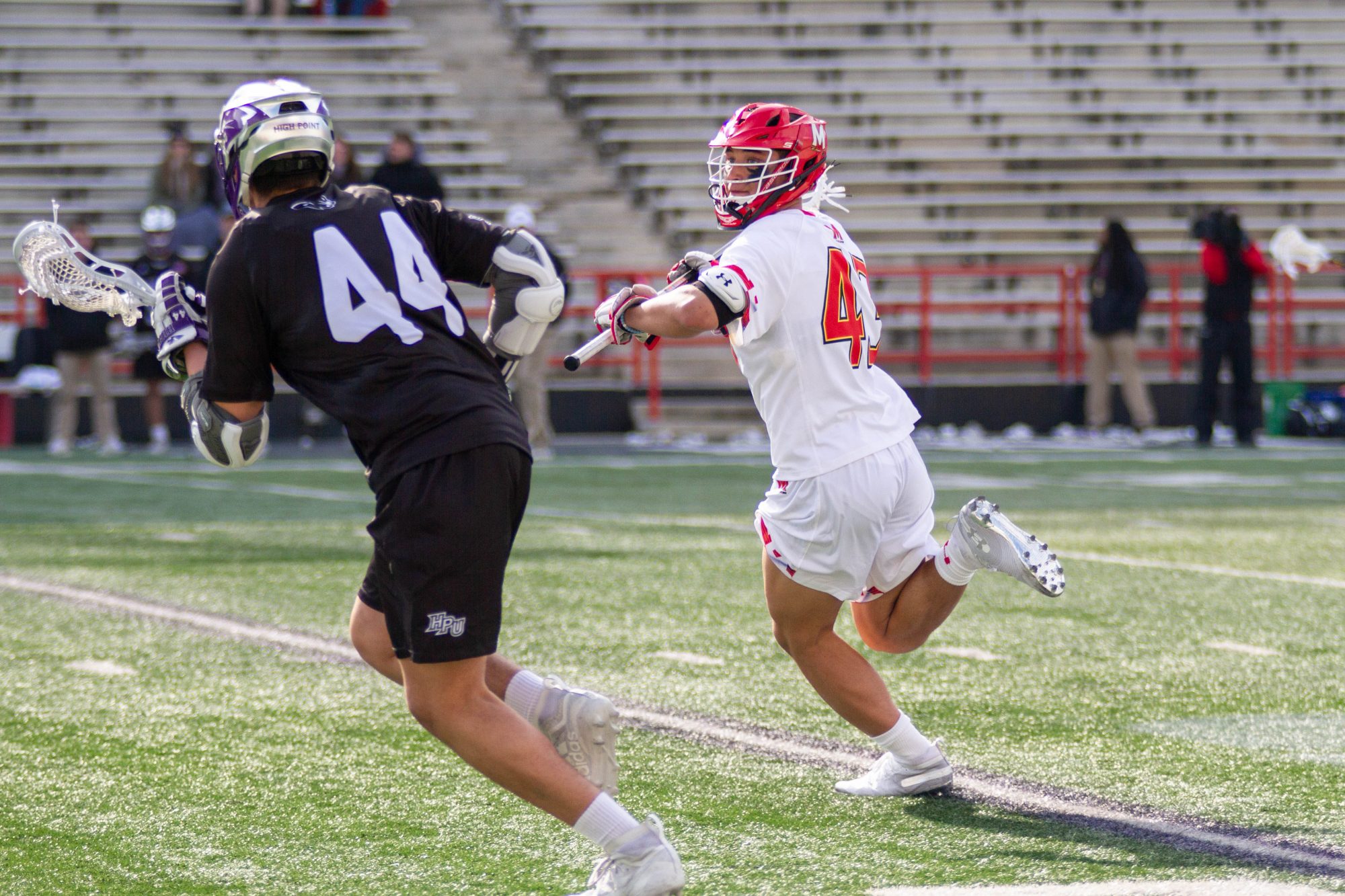 A Maryland men’s lacrosse army of four stood in front of Chris Brandau early in the third quarter, prepared for yet another assault on the sophomore goalkeeper’s net.

Midfielder Roman Puglise and attackman Daniel Maltz had trudged off the pitch moments before for slashing, leaving an undermanned Terps’ penalty unit — John Geppert, Nick Grill, Brett Makar and Matt Rahill — to protect Brandau’s net and hold No. 6 Penn’s lead at five. The odds were clearly stacked against Maryland, having conceded 12 goals on 23 shots in the first half.

But the Terps’ backline held, with Brandau needing to make only a single save while shorthanded. In the space of a minute, the Terps’ defense found its swagger — one that waned in the first half as shot after shot rustled the net.

As the second half progressed and the Maryland attack attempted to find its footing, its youthful backline stood tall, fueling a late rally on Saturday.

The second half didn’t get off to the smoothest of starts for coach John Tillman’s squad, which saw its three-goal halftime deficit balloon to six less than eight minutes into the third frame.

And if not for Brandau, the Quakers’ edge could have bordered on insurmountable — the sophomore made eight saves in the third period, five of which came before the Terps got off the mark.

With Puglise and Maltz momentarily sidelined, the defense responded, harassing the Quakers’ attackmen with a vigor that had been lacking in the opening 30 minutes. And once Penn midfielder Mitch Bartolo’s effort flew into Brandau’s stick, Tillman sensed it was a breakthrough moment for his defensive unit.

“We started off a little slow, dug ourselves a hole, I thought we lost our poise,” Tillman said. “We got two men down, we kill it, and I think that gave us a little lift.”

The Terps began to hound Penn’s attackers, showing their athletic prowess against one of the most physically imposing sides in the country. Meanwhile, faceoff specialist Justin Shockey, who finished second best in the majority of his duels at the X in the first half, grew into the game, helping to limit the Quakers’ transition opportunities — an aspect of the game that gave Maryland’s backline fits in earlier moments of the game.

“As the game got going, we made some plays — we seized momentum,” Tillman said. “You’d rather be up than down, but boy, when you start getting that momentum, and you’re playing to catch up versus playing to hold on to it, sometimes there’s a little bit of an advantage in that.”

The Terps’ backline pitched a shutout in the final 22 minutes, giving its attacking unit license to push forward in the hopes of slimming the margin further, a particularly impressive accomplishment given the inexperience present in the back at the moment. Makar, only a sophomore, has made the most appearances in defense out of any of the back four.

But those last 22 minutes represent clear signs of progress for a young, yet talented crop of defenders. It lifted Tillman’s squad to an unlikely comeback victory against a national championship contender on Saturday. And with the Terps still getting themselves up to speed against some of the nation’s best, it was a showing that bodes well for the imposing matchups still to come.