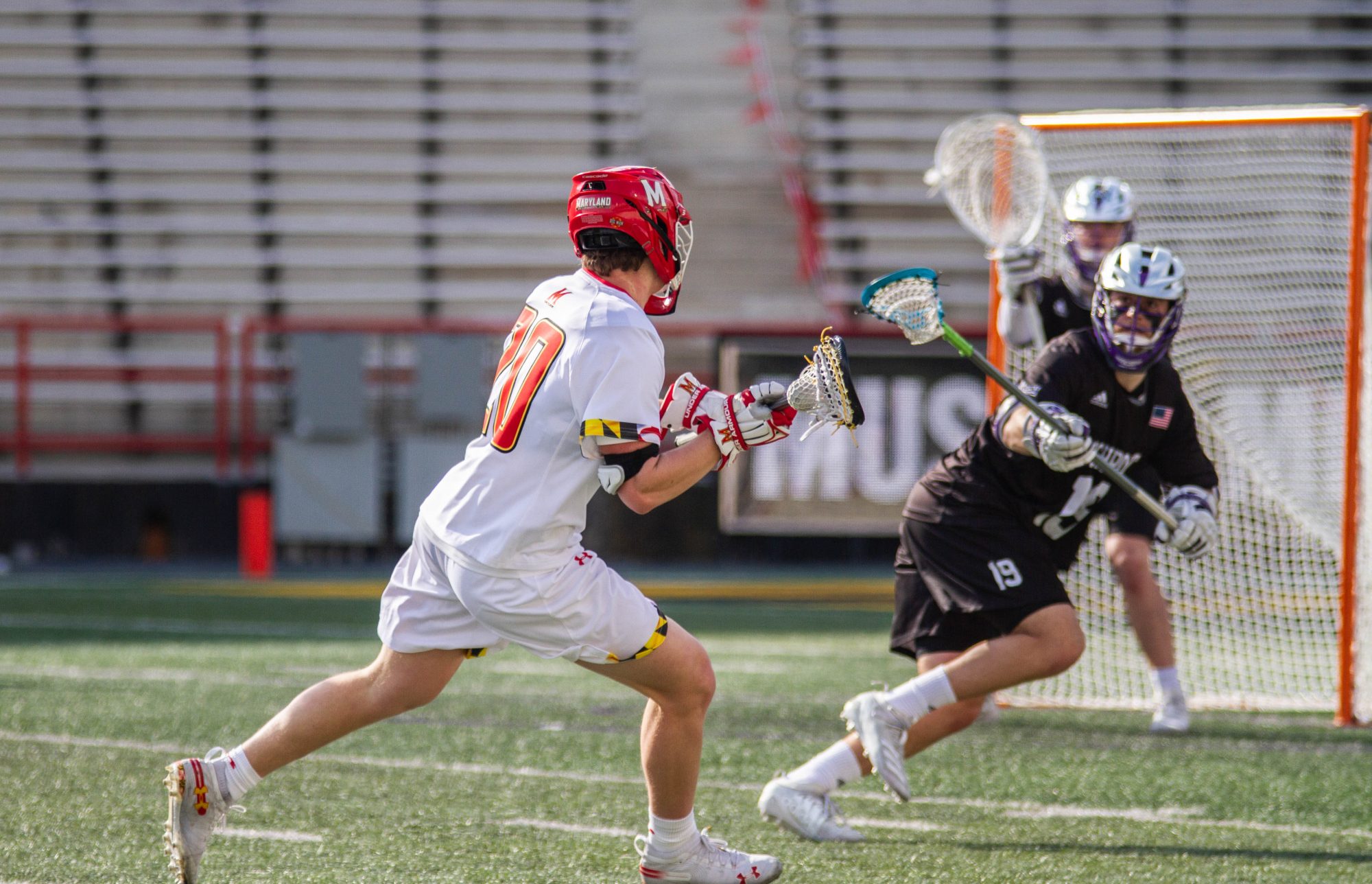 Yet there Andrew Hamilton was, barrelling through Maryland’s backline after winning his faceoff. For a moment, it looked like the Richmond faceoff specialist would carve out a chance, just as he had done in the first quarter when he won his duel at the X, sliced through the Terps’ defense and slotted past goalkeeper Chris Brandau.

But just as Hamilton whirled past midfielder Roman Puglise, defender John Geppert swooped in and jarred the ball loose — one of his career-high three forced turnovers.

It was the type of shrewd defensive action that has come to define Geppert’s opening to the season, one that culminated with a Big Ten Defensive Player of the Week award following his second career start.

And while it hasn’t always been easy for the sophomore — who came to College Park as an offensive midfielder and spent large portions of his first year on the sidelines — Geppert’s emergence as a defensive force has been crucial to Maryland’s early-season success.

“As soon as I got my opportunity, I tried to make the most of it,” Geppert said. “Fortunately, the ball bounced my way a couple times and now I’m here.”

That wasn’t always the case, though. Geppert emerged as an attacking presence at Landon School in Bethesda, racking up 80 goals and 53 assists for the Bears while sharing the field with illustrious names such as Maryland faceoff specialist Justin Shockey and Johns Hopkins attacker Joey Epstein, the reigning Big Ten Freshman of the Year.

While Shockey and Epstein made their presence known in their first years at the college level, Geppert’s freshman campaign was far less glamorous — he made a mere three appearances in his first two months. Geppert’s teammates offered encouragement and pointers on how to better transition into a more defensively-oriented position, but the lack of involvement was frustrating.

“I had to prep every week like I was gonna play,” Geppert said. “A lot of times I was let down that I wasn’t playing.”

As the season progressed, though, Geppert’s talent began to shine through, carving out a prominent role as a long-stick midfielder. It started on March 16 against Villanova, when Geppert recorded his first ground ball and forced two turnovers. A month later, against then-No. 9 Ohio State, Geppert was even more impressive: he notched three ground balls, and dispossessed the Buckeyes on two different occasions.

He credits Maryland’s community approach in aiding his progression — one that resulted in the then-freshman playing in each of Maryland’s final seven games.

“Coach [Jesse] Bernhardt was always willing to help me out,” Geppert said. “But even guys like Matt Rahill, I was playing [long-stick midfield] with him, Nick Brozowski, and then Curtis Corley was a defensive leader down there — I couldn’t ask for a better group to jump into and start my career with.”

Geppert dropped into the defense prior to the start of the season, partnering alongside roommate Brett Makar. But he was undaunted by the challenge, quickly picking up on the intricacies of his newfound position.

On Saturday, Geppert’s confidence and swagger were on full display. Early in the fourth quarter, Geppert shrugged off a Richmond attacker and drove toward the net. He intended to pass to attackman Jared Bernhardt, he says, but space continued to open up for him, prompting him to have a pop at goal.

And as his effort struck the polyester netting, Geppert was met with shoulder bump after shoulder bump from his delighted Maryland teammates. It was his first career goal.

The strike breathed life into a dour Maryland attack, one that would soon explode for five goals en route to a 14-13 double-overtime victory.

“[That] sparked our run,” Wisnauskas said. “John got us going, and as an offense, we were like ‘Let’s keep moving and get our offense flowing.’”

But in the midst of his teammates’ fevered celebrations, Geppert’s mind raced back to his days on the attack.

“That’s where I feel most comfortable right now – playing in transition – because that’s what I did all my life,” Geppert said. “But my focus is on the defensive end.”