Maryland baseball battles back to beat the College of Charleston in extra innings, 4-2 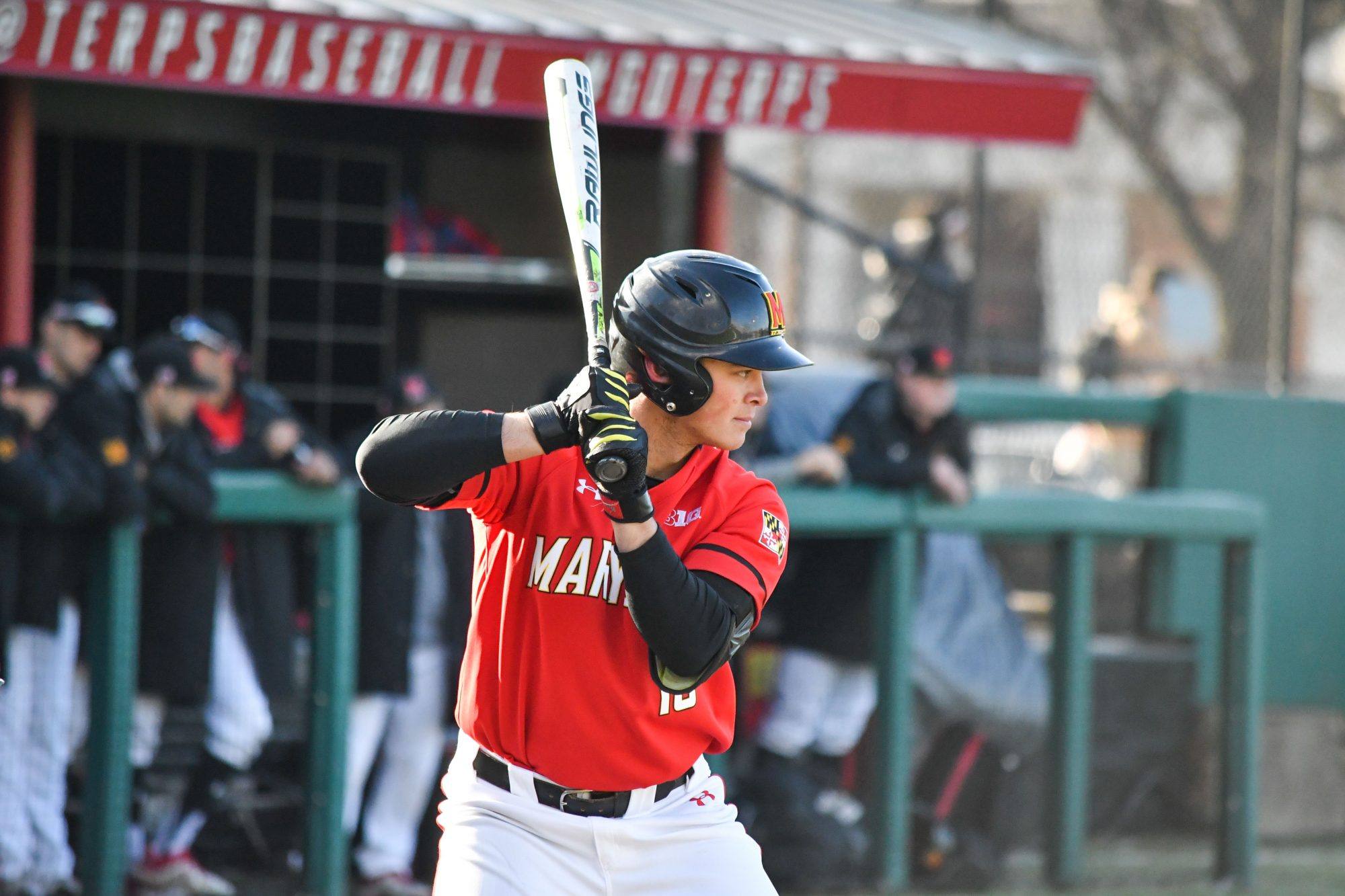 In Maryland baseball’s first two games of the season in South Carolina, the Terps unleashed their offensive potential on Charleston Southern and Iona, scoring a combined 19 runs. Their pitching held serve, too, allowing just two runs in each game.

But while the arms continued to shine Sunday against the College of Charleston, the bats fell silent for the majority of the contest.

It took a ninth-inning rally to tie the game, followed by two wild pitches in the 10th inning for the Terps to come out of Mount Pleasant, South Carolina, with a 4-2 win and a perfect record three games into the season.

Early on, it seemed as if Maryland’s offense would continue to stay hot after two strong showings on Friday and Saturday.

Tucker Flint and Randy Bednar reached base against right-hander C.J. Czerwinski, setting the table for Maxwell Costes. But Costes grounded into a double play, ending Maryland’s chances in the top of the first.

The Cougars responded by putting two on with two out in the bottom of the inning, but designated hitter Jaxon Weatherford struck out on a 0-2 fastball to keep the game scoreless.

After that, both Czerwinski and right-hander Sean Burke dominated. Neither team mounted much of a threat early, with the pitchers keeping each offense off balance.

“We couldn’t quite string anything together,” Vaughn said. “The ballpark was playing really, really big.”

In the top of the fifth, the Terps nearly broke through.

After Justin Vought was hit by a pitch for the third time this season, Troy Schreffler clubbed a first-pitch fastball to the left-center field wall. But College of Charleston left fielder Harrison Hawkins lept at the wall, made the catch and doubled off Vought at first base.

Czerwinski got shortstop Benjamin Cowles to pop up, but his day ended there after just 65 pitches. In his debut, the Cougars starter allowed three hits and struck out two in five innings.

Right-hander Tradd James picked up where Czerwinski left off, setting the Terps down in order in the top of the sixth before the Cougars finally broke through.

Leading off the bottom of the inning, Hawkins roped a double to left field for his team’s first hit since the first inning. After an infield single from Ari Sechopoulos, Burke’s day was done.

The right-hander, who missed all of last season with an injury, showed no signs of rust in his college debut. He allowed one run and three hits in five-plus innings while striking out eight.

“I just tried to keep it simple. I wasn’t trying to over-complicate the gameplan at all,” Burke said. “We knew they would have a lot of righties who would try to hit balls in the air, so the gameplan was basically pound fastballs and spin a curveball if I needed it.”

“He looked like a big-leaguer out there for five or six innings,” Vaughn said.

Hawkins would cross the plate one batter later on a fielder’s choice for the game’s first run.

Maryland threatened in the top of the seventh but was unable to claw its way back. Meanwhile, Hawkins provided insurance for the College of Charleston with an RBI single in the bottom of the eighth, putting the Terps down two with one last chance in the ninth.

Maryland, hitless since the third inning, finally capitalized on its chances.

After right-hander Josh Price worked a scoreless eighth, he gave up a leadoff single to Chris Alleyne followed by a double to Flint. Bednar, Maryland’s early RBI leader, brought Alleyne home with a sacrifice fly, setting up Michael Pineiro.

Vaughn asked Pineiro, who replaced Costes in the seventh inning, to lay down a suicide squeeze bunt. While the play does not occur often in games, Pineiro was ready.

“The bunt game is a huge part of our offensive game,” Pineiro said. “We practice every single day getting bunts down in different situations.”

He executed the plan to perfection, dropping a bunt down the first-base line. The Cougars had no play at the plate as Flint scored, and all of a sudden, a Maryland offense that couldn’t solve the Cougars’ pitching had tied the game.

Right-hander Mark DiLuia kept the Cougars scoreless in the bottom of the ninth, and more wildness ensued in the 10th.

Two runners reached for the Terps against right-hander Brooks Lucas, who was lifted for freshman right-hander Ty Good. Then, disaster struck for the Cougars.

Good uncorked a wild pitch, allowing third baseman Tommy Gardiner to score from second and put the Terps ahead. It happened again one batter later, as Austin Chavis scored to give Maryland a 4-2 lead.

Right-hander Trevor LaBonte shut down the College of Charleston in the bottom of the 10th, and the Terps had stunned the Cougars.

For Maryland, it was a resilient win against a quality opponent, one they could carry with them home to College Park after a perfect weekend.

“This team is a really talented team,” Pineiro said. “We played pretty good baseball this weekend, but we still have a lot of work to do.”