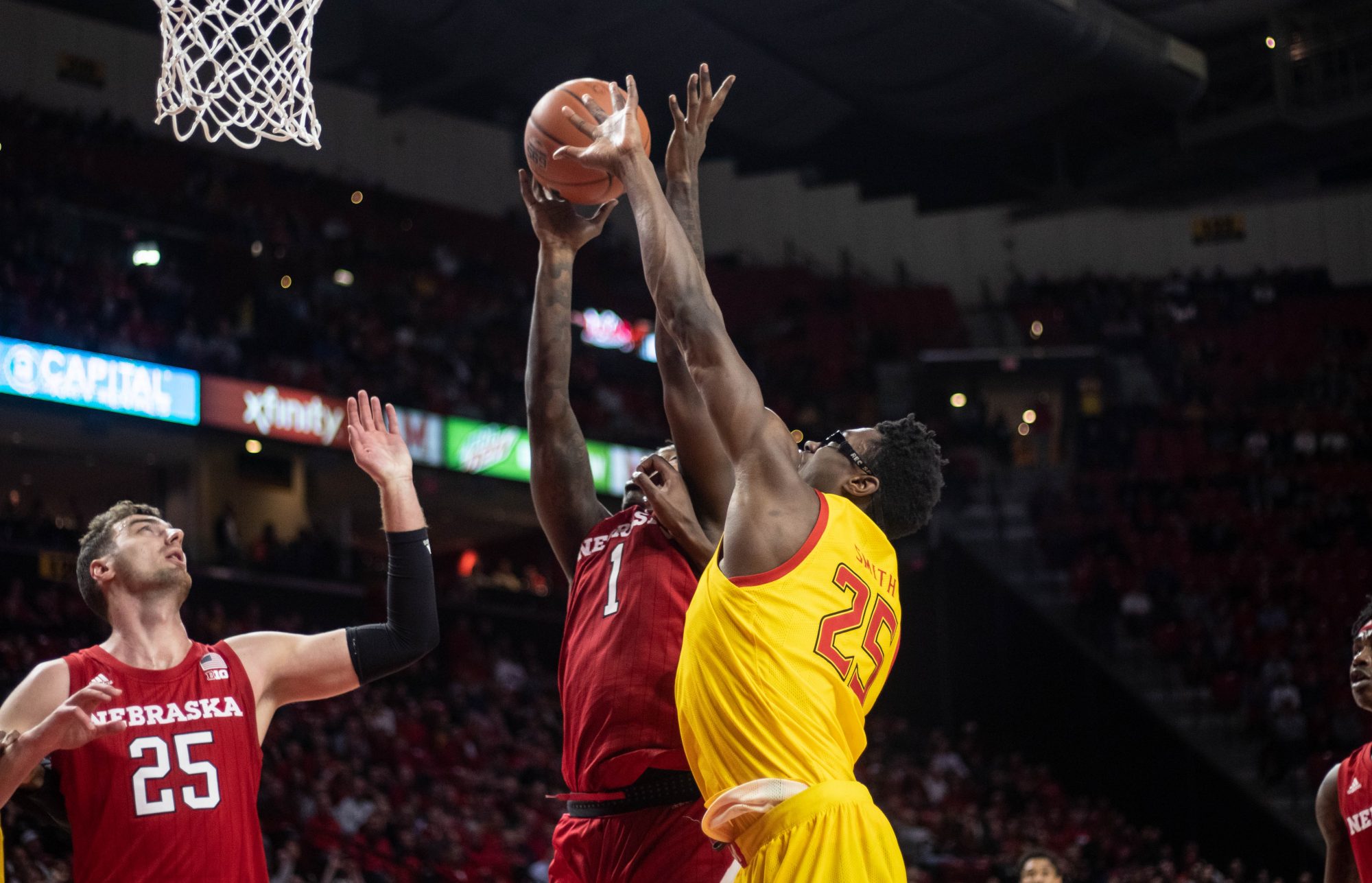 Cam Mack had heard it all game, ever since one of his early three-point attempts missed the rack entirely.

That’s when the “air ball” chants began, and they’d never let up, especially when Mack stood by himself at the free-throw line, the isolated figure with the weight of his team on his shoulders. He made both of those attempts, drawing Tuesday’s contest against No. 9 Maryland men’s basketball within one point with 12 seconds remaining.

Guard Anthony Cowan missed the front end of his 1-and-1 opportunity, essentially the best-case scenario for Mack and the Cornhuskers. But when Mack scooped up the loose ball, charged toward the rim and rose up to win it for Nebraska, there was Jalen Smith.

And there was the crowd, making sure the Cornhuskers’ leading scorer heard it. Mack struggled all game, converting just one of his field goal attempts. Smith ensured the last one — a wild dash to the hoop, an off-balance heave toward the rim — wouldn’t land home. The Terps forward blocked away the shot to secure coach Mark Turgeon’s team a 72-70 win.

“I knew he was going to block that shot,” Turgeon said. “I don’t know if you guys did or not, but I did.”

[Read more: With Anthony Cowan on the sideline, Maryland basketball showed it can hold its own]

After a routine first half, Nebraska (7-17, 2-11 Big Ten) narrowed Tuesday’s contest to a one-possession game with 7:37 remaining in the second frame. That’s when guard Eric Ayala hit the first of his two big treys, pulling up from the wing and letting a fist pump go when it swished through the net. Smith followed it with a layup, part of his seventh straight double-double.

Ayala hit another trey — one of his four, scoring a season-high 16 points — to push the lead back to 10. But yet again, the Cornhuskers would storm back, setting up Smith’s last-second heroics to reject Mack’s potential game-winner. It hadn’t looked that close, not for much of the opening frame.

“Like I told them in the locker room,” coach Fred Hoiberg said, “we just went toe-to-toe with the No. 9 team in the country, who’s got the best record in the best league in the country.”

Nebraska pulled up from long distance throughout the first half, managing to hit just three of its 20 efforts from deep. The Cornhuskers were still within one point, though, with 8:55 before halftime, due in part to a Terps stretch lasting almost four minutes without a field goal.

[Read more: After poor shooting display, Eric Ayala hasn’t given up. Neither has Maryland basketball.]

But it was forward Donta Scott’s 3-pointer that broke Maryland (20-4, 10-3) out of its stupor and triggered a 10-0 run, separating the sides once more for the remainder of the half. Scott — who finished with 10 points and 10 rebounds — looked solid again after posting seven points in Friday’s win over the Fighting Illini, a result that gave the Terps sole possession of first place in the Big Ten.

Nebraska, conversely, is the penultimate team in the conference, featuring only one contributor — guard Thorir Thorbjarnarson — who was on the team last year. Hoiberg’s squad is a hodgepodge of transfers and freshmen, and oftentimes this campaign the Cornhuskers have played like it.

They showed grit in the second half, however, even as Smith posted a double-double with 19 minutes remaining, going on to score 16 points to accompany his 13 boards. Cowan, meanwhile, added 13 points and 10 assists — one of three players with a double-double Tuesday — taking advantage of free-throw opportunities to buoy the Terps to a 38-25 advantage at the break.

But he wasn’t pleased with his defensive effort. He pointed to missed back-cuts and struggles to keep his man in front of him, and he felt that had a trickle-down effect to his teammates, spurring Nebraska onto a second-half run.

“This game right here was probably my worst defensive game I had my four years here,” Cowan said. “And that’s a wake-up call for me.”

While the Cornhuskers pulled within 56-54, Maryland gained some breathing room with Ayala’s threes. But Nebraska raced back to draw within 71-70, with Mack converting twice at the line after Turgeon opted to take his chances with a 58 percent free-throw shooter rather than risk a made three.

And after Ayala and Cowan missed the front end of 1-and-1 chances, Mack had a chance to quiet Xfinity Center, the crowd that had been on him throughout his four-point performance — nine below his season average.

“We got lucky. We miss those two free throws,” Turgeon said. “They could’ve won. I mean, kid could’ve made the layup and we could’ve lost.”

Ayala saw Mack’s drive unfold. He saw Wiggins and Darryl Morsell collapsing on the lane around Mack. But above all, Ayala saw Smith — the defensive anchor he’s grown to be — hovering around the rim.

“I took my chances on him making an unbelievable shot,” Ayala said, “for him to make that and win the game.”

Smith ensured Mack wouldn’t, with one resounding block capturing Maryland’s 20th win of the season at the end of a game that could’ve gone another way.