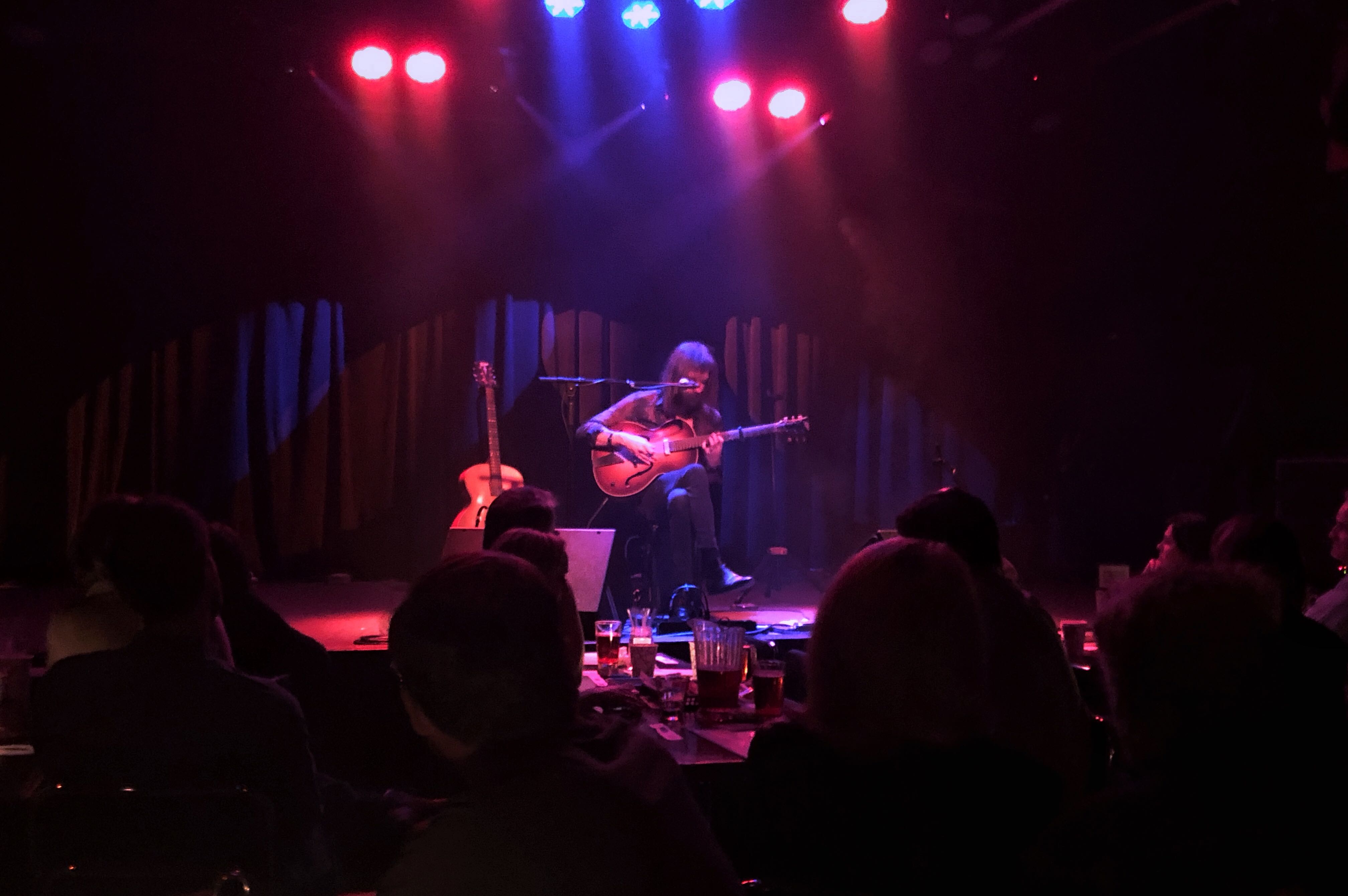 It was dark inside Jammin’ Java, the room illuminated only by small candles and a bright blue light shining onto an empty space in the middle of the stage.

The air in the room was filled with anticipation and a lingering feeling that this experience would be temporary. Whether he’s in Vienna, Virginia — the setting Saturday night — or Austria, English singer-songwriter Jack Broadbent never stays in one place for too long.

In between his last tour with Ronnie Wood and his upcoming tour with Peter Frampton, the folk slide guitarist is headlining his own North American tour for his newest album Moonshine Blue. He’s been on the road for 10 years and wrote the album while on tour, he said.

His concert is much like his album, an exploration in all aspects of self and a challenge of boundaries. Even his opening act — Jarrod Dickenson and his wife, Claire — captured a soulful sweet side of the concert experience that brought diversity to Broadbent’s musical content.

Broadbent exudes a comfortable restlessness and quick-witted charisma as he performs. His presence takes up the whole stage, despite being seated in the center surrounded by darkness and his guitars.

He began the show with what I believe to be his most remarkable skill — playing slide guitar with a flask. He bobbed his head along with the beat, his long hair whipping in the air to catch up with his vivacity.

The strumming and whining of the strings was energetic and frantic yet controlled. There was a method to the madness, an organized chaos in the way the flask slipped and slid across the strings.

Broadbent started playing slide guitar with all kinds of objects years ago while busking in London.

“I used to use knives and lighters, anything a little bit dangerous is kind of fun,” Broadbent said with a chuckle. “One day I was playing a show at a bar, and my friend who works there came and said ‘Oh, I found all these flasks.’ And I saw the shape of one of them and I thought, I know what I could do with that.”

After a high-energy slide guitar, Broadbent would switch out his guitar and plunge into a soft and soulful acoustic number such as “This Town” or “Too Late.” Constantly switching it up seemed to be the theme throughout all he does, capturing every facet of his experience on stage and on his album Moonshine Blue.

“Well if there’s a theme to it, then it’s me,” Broadbent said. “I’ll draw from real-life experience, so I suppose the theme of it, for me, was the year I spent writing it. What it feels like to be moving around and traveling, that would make the most sense — without me making up some bullshit.”

In between songs, Broadbent would strike up playful banter with the crowd, keeping everyone engaged while he switched guitars. Right before he launched into “Woman,” he said to the audience, “This song is about women.” After some grumbling from the crowd he playfully corrected himself saying, “No, this is a song about YOUR WIFE,” and quickly changed a lyric about getting a “woman’s” number to “your wife’s” number.

[Read more: Where does Billie Eilish go from here?]

I couldn’t help but smile as I watched him perform, since his passion and energy is infectious. You can tell that he genuinely loves what he does and there’s no pretentiousness about it. He is unapologetically himself and doesn’t take anything too seriously.

Broadbent said he makes sure that he enjoys all aspects of his music, making it and performing it, and that he achieves this by “not compromising, AT ALL, EVER, at all in any aspect.”

And that’s Broadbent — long hair with a side bang and slight Jesus beard, floral button-down with his “tits out,” strumming and picking and sliding at the strings of his guitars, which he affectionately calls his babies.

So if you ever get a chance to see the man who gets homesick from not being on tour, do it. There’s magic in the way he bares his soul through his song — real and raw. And this is why, from now on, I’ll only be listening to musicians who have the same hairstyle as me … I’m kidding, but I WILL be including a lot more Jack Broadbent in my daily music rotation.