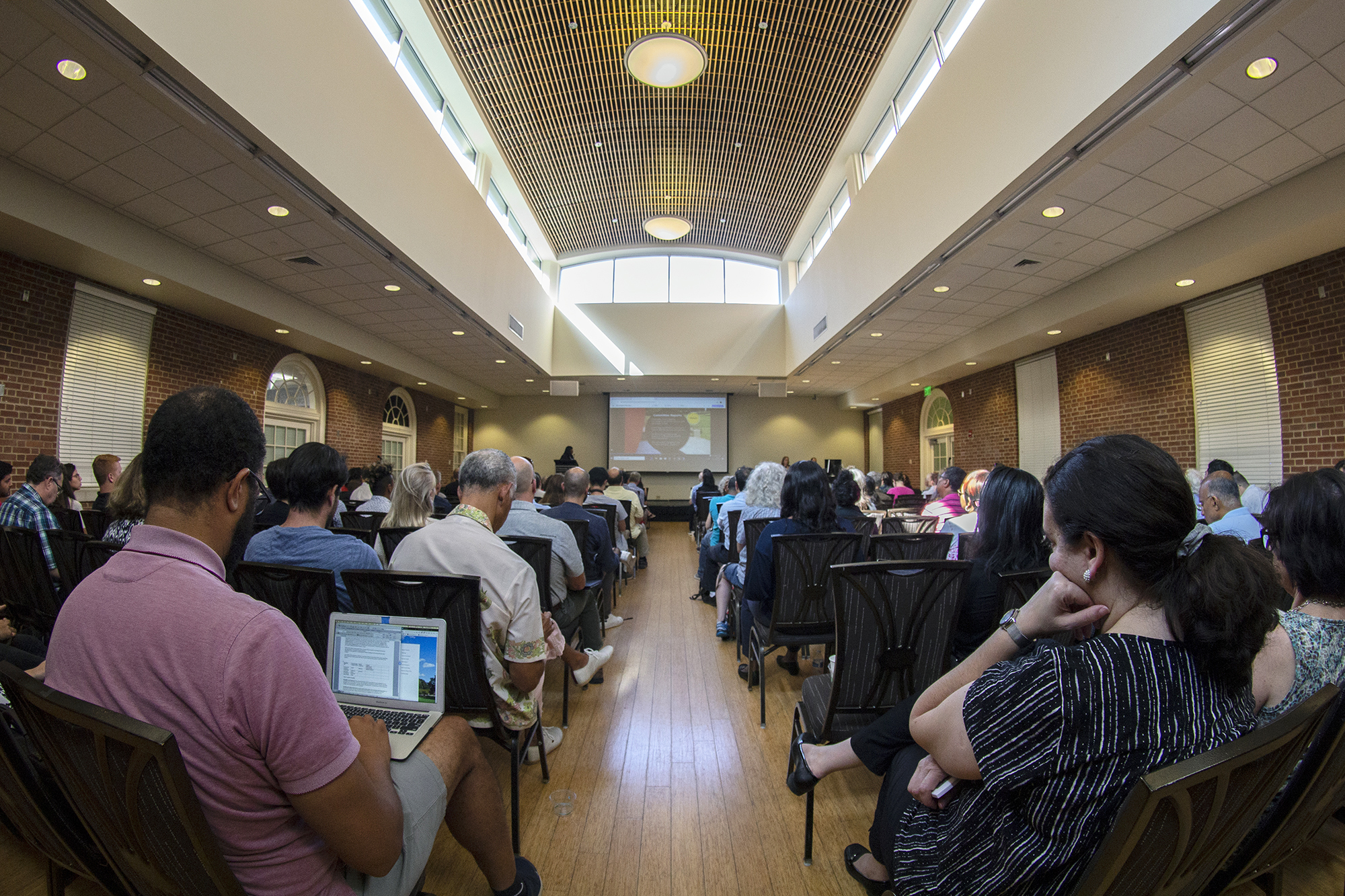 Reka Montfort leads new senators through a new senator orientation at the first senate meeting of the semester on Sept. 12, 2019. (Julia Lerner/The Diamondback)

By the time the period to apply to run for a University Senate seat closed on Friday, a clear divide had chalked up in the candidate pool: Far fewer graduate students had applied to run than undergraduates.

Currently, the ratios of graduate and undergraduate student representation in the senate are largely the same, with about one senator per 1,000 students. But Pamela Lanford, the body’s chair, still expressed concern for the relatively lower number of graduate student applicants. She traced the lack of engagement back to their overwhelming workloads, which she said could discourage some from becoming involved in extracurriculars or student life on campus.

“It’s natural for grad students to just not want to become absorbed into the broader community,” said Lanford, director of animal research support in the university’s research division. “And it’s not a bad instinct. Because you do have to focus. Or you won’t finish.”

[Read more: Less than half of UMD student senators have attended meetings this year ]

Additionally, Lanford said advisers rarely encourage their graduate students to get involved on campus outside of their departments. Some advisers even actively discourage their students from doing so, Lanford said, adding that some faculty members don’t prioritize university engagement.

However, this did not apply to Lanford when she was a doctoral student at this university in the 1990s. She said her former adviser, Arthur Popper, consistently encouraged her to attend conferences and join committees on campus, giving her the opportunity to build relationships.

Branching out beyond the classroom or lab is becoming increasingly more important for today’s graduate students, said Popper, the senate’s former chair and a retired professor. For a long time, people assumed that students went to graduate school exclusively to prepare for a career in academia. But now, more and more graduate students are taking jobs that don’t fall in this category — and it calls for a different set of skills, Popper said.

“[Graduate students] need to be prepared for, in my view, a much broader world,” Popper said. “Students aren’t going to get jobs in universities. They’re going to get jobs doing very productive and successful things where they can contribute to society.”

The struggle to draw in graduate student participants hasn’t been isolated to the senate — the Graduate Student Government had also run into recruiting difficulties, said its president, Annie Rappeport. So, to bolster its numbers, Rappeport said the GSG sought help from university departments, which connected executives with potentially interested students.

While Rappeport said graduate student representation is growing among campus governing bodies, she added that there’s still room for improvement.

“We have further to grow, because I think there’s still potential to improve,” she said.

[Read more: A new committee could give the University Senate a say in the school’s budget ]

Britt Starr, a senator and English doctoral student, emphasized the importance of increasing graduate student representation in the senate. When graduate students serve as senators, they not only develop essential skills — they also enhance the body’s ability to serve the campus community. Graduate students are trained to analyze problems, and tend to view issues through a “more intersectional lens than the older faculty,” Starr said.

However, she recognized that graduate students are already “super overburdened and underpaid.” The current minimum stipend for graduate students working nine-and-a-half month assistantships sits at $18,791 — about half the salary MIT’s Living Wage Calculator lists as a livable wage for a single adult in Prince George’s County.

Even so, Starr hopes that the next senate term will see an influx of new faces.

“It would be unfortunate for the future diversity of representation if the grad student seats don’t get filled,” she said.