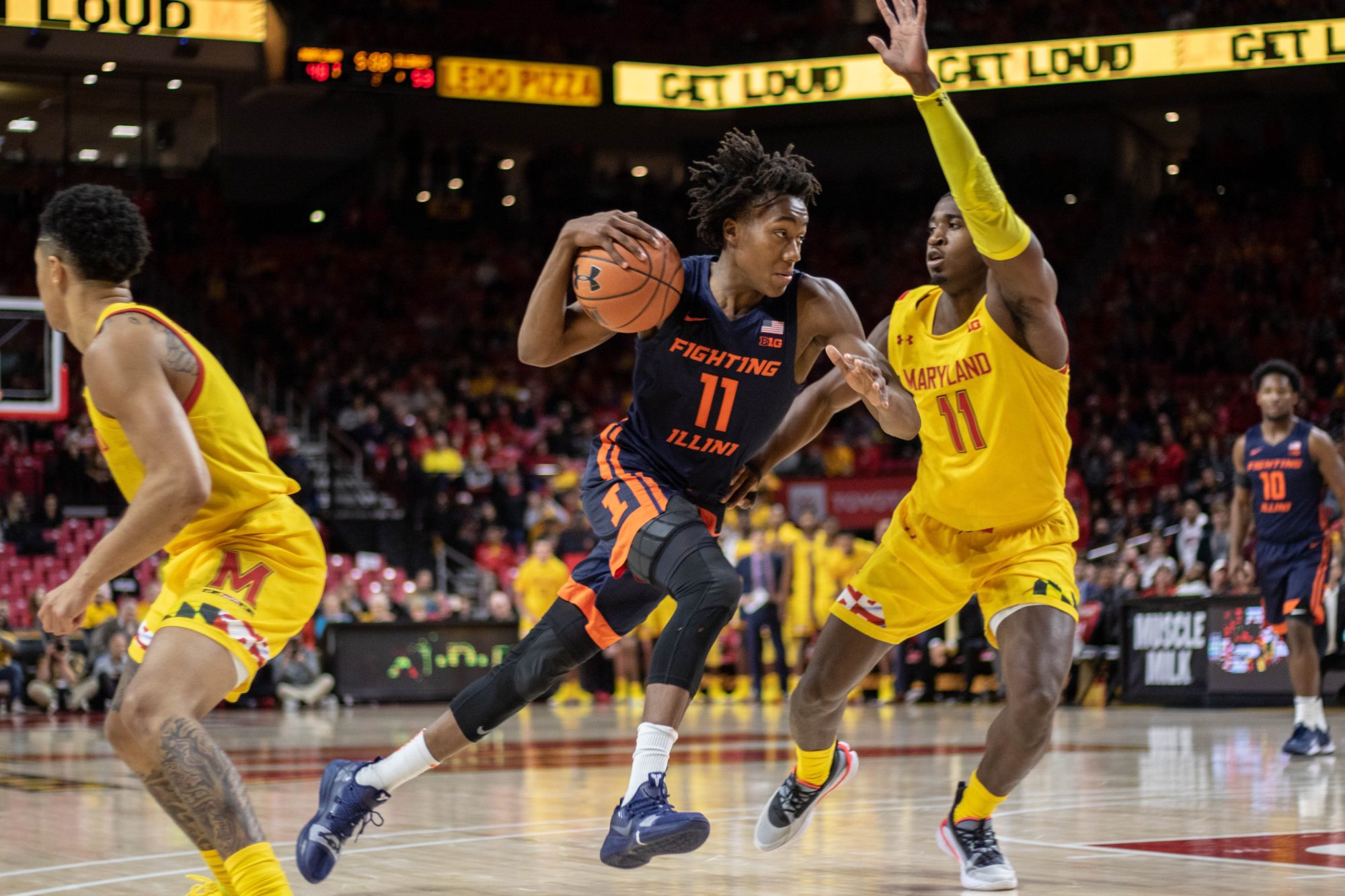 As Mark Turgeon put it after No. 9 Maryland men’s basketball’s 75-66 victory over Illinois — the Terps’ first road win over a top-20 team since 2008 — there’s a certain level of luck involved.

But a team still needs to be good, the coach said. When Maryland switched to a press-and-zone defense with less than nine minutes remaining before halftime while trailing by 12, Turgeon’s team benefited from a bit of both.

The Terps lucked out with a favorable Illinois lineup, foul trouble keeping some zone-killing sharpshooters sidelined. And Maryland’s also a talented defensive squad, capable of changing games in ways that don’t include scoring.

Much has been made of that defensive prowess this year, and it’s shown up time and again to will the Terps through difficult matchups such as Friday’s. So after an in-game adjustment with about 30 minutes before the final buzzer would sound, that double-digit deficit didn’t seem so imposing.

“[Illinois] lost their rhythm,” Turgeon said. “They had 29 in the first nine minutes or something, ended up with 60-whatever. So kind of slowed them down a little bit.”

That first possession with zone seemed to set a marker for how disruptive it would be throughout the final 30 minutes of action. After guard Darryl Morsell made a pair of free throws, Maryland dropped back into a press. Guard Da’Monte Williams worked the ball up court for the Illini, came to a stand-still just before crossing the half-court line and looked for an avenue to escape guard Aaron Wiggins’ defense.

But Morsell read his ensuing passing attempt to forward Kipper Nichols, jumped the lane and picked it off. On the fast break, Morsell squeezed a bounce pass through traffic for forward Donta Scott to finish at the rim.

However innocuous Scott’s layup appeared at the time, it was the start of a turnaround, even if the Terps still trailed by 10. But from then on, Illinois would score 35 more points compared to Maryland’s 54 — including Scott’s lay-in. And despite opening up a 14-point lead in the first half, the Fighting Illini converted at a 25.9-percent clip during the second half.

“The zone,” said guard Alan Griffin, whose two 3-pointers in the final 20 minutes were part of just seven field goal attempts the Illini managed. “The zone was the adjustment they made. We were struggling to find ways to score out of it.”

[Read more: After poor shooting display, Eric Ayala hasn’t given up. Neither has Maryland basketball.]

The Terps have forced other teams into scoring difficulties this season, too — against Rutgers; in the second half against Northwestern; at home against Purdue; and again Friday night, needing another comeback effort to move into first place in the Big Ten.

But not many other teams have suffered through Maryland’s zone scheme.

“Quite frankly,” Turgeon said, “we haven’t been very good in it.”

Still, the Terps have practiced the zone defense consistently, and Turgeon’s bided his time to pull it out.

Friday was that moment, needing to counteract Illinois’ fast start and mounting advantage. The 3-2 scheme put the brakes on that before a 1-3-1 zone — something Turgeon said they had used on just one possession against Indiana — made an appearance in the second half during the comeback victory.

“We get comfortable when we get down a little bit,” guard Eric Ayala said. “I don’t think we get rattled.”

Trailing early may not be the best habit for the Terps to fall into. But with an ability to change games defensively, those early deficits haven’t been fatal. And at the State Farm Center — another hostile setting, facing another sizable deficit — the switch to zone defense added just another chapter to a season full of high-level defense.