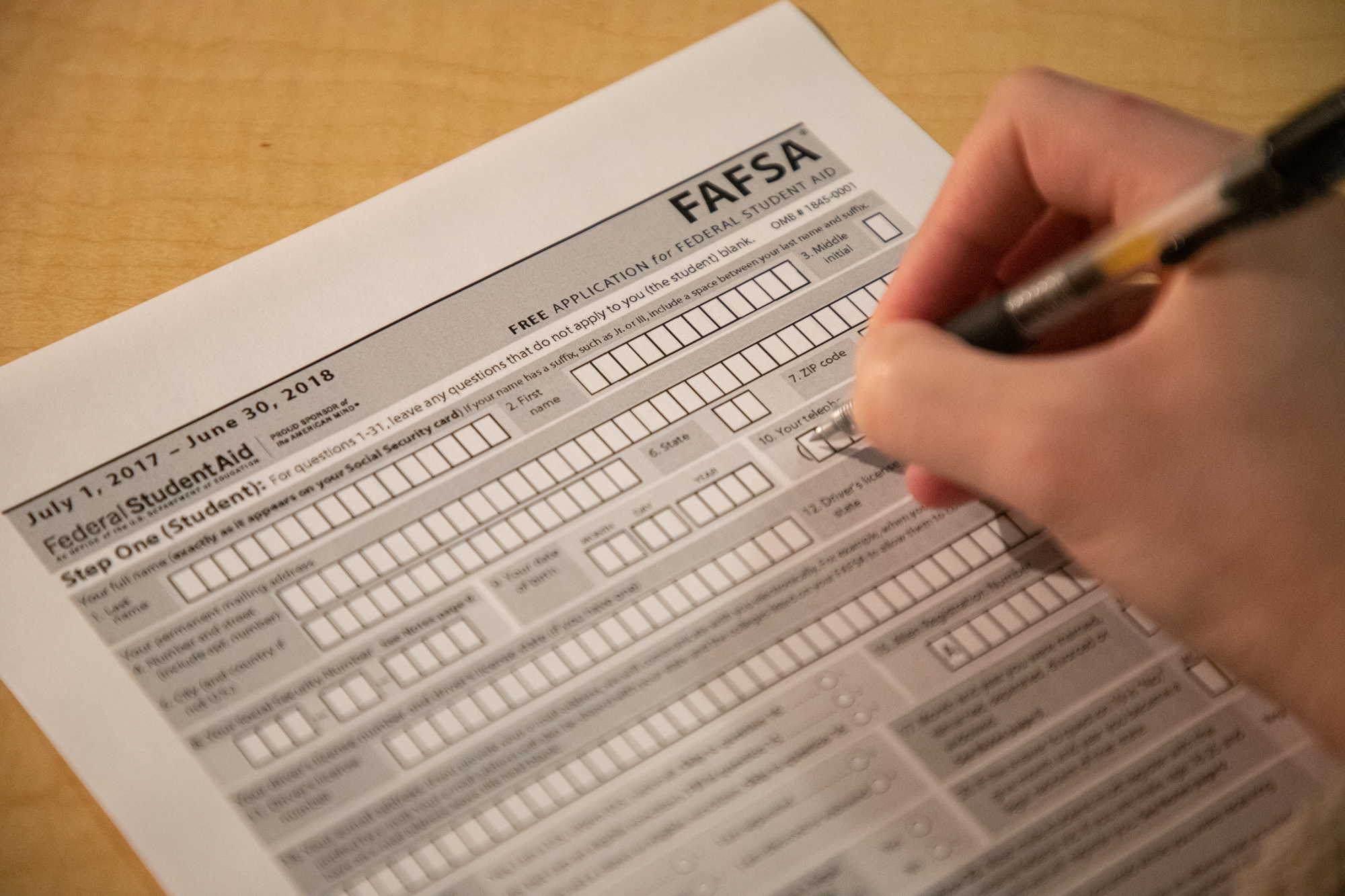 A student fills out a paper version of the Free Application for Federal Student Aid, or FAFSA. (Evan Kramer/The Diamondback)

Ever since student loan debt hit the $1 trillion mark in 2012, the ever-growing burden has become a focus of presidential campaigns.

Today, with as many as 44 million Americans with student loan debt, several candidates competing for the presidency have presented their own case for handling student loans. And in a state with one of the highest rates of federal student loan debt in the country, some University of Maryland students plan to vote with that in mind.

“I mean, they’re going to be probably the main thing driving my financial decisions for the next 15, 20 years,” said junior government and politics major Stephen Kenny. “It’s weighing huge on my mind, especially as a voter.”

Maryland accounts for $32.3 billion in federal student loan debt as of last June, according to Capital News Service. This makes it 13th on the list of states in the country with the highest federal student debt.

For Kenny, who said that student loans fall under the top two issues most affecting his vote, searching for a candidate who can adequately address student debt was essential. He found that in Sen. Elizabeth Warren.

Under Warren’s loan forgiveness plan, borrowers with household incomes less than $100,000 would get $50,000 of their debt canceled. Those who make between $100,000 and $250,000 would qualify for further loan forgiveness on a sliding scale. A small annual tax on families with wealth over $50 million would pay off the loans.

“Those plans in general — including mass forgiveness of student loans — speak to me because they understand the economic burden that my generation faces, even though they’re not of my generation,” said Kenny, who sits on the executive board for UMD for Warren, a student-run campaign group.

While he believes Warren’s plan has the best potential to move the economy forward, other students — including Michael Dunphy, president of Terps for Bernie — believe it doesn’t go far enough.

Like Kenny, Dunphy said student loans are a top priority going into the next presidential election. He acknowledges that they will keep weighing on his mind for the next 15 years while he pays them off. And in a society that values education, student loans are a burden that people “shouldn’t even have to go through.”

“It’s kind of like the nagging thing in the back of your head that you just push away as much as possible, but you know it’s still there,” the junior computer science and government and politics major said.

Dunphy supports Sanders’s proposal to cancel student loan debt completely, regardless of a person’s income, once they graduate. Sanders plans to raise over $2 trillion to get rid of the debt by imposing a new taxes on financial transactions, such as bond sales and stock trades.

“There’s been a history with Social Security, Medicare, you name it, where a universal program works better than a means-tested program, where you have a limit based off the income or something like that,” Dunphy said. “I think Sanders’ plan is not just more effective, but more politically viable.”

[Read more:  At UMD, doctoral students depend on their advisers. What can happen when things go wrong?]

“I think making public colleges tuition-free is the most important part of the whole thing because that frees up future generations of students to pursue higher education without the stress of student loans,” the senior computer science major said.

For those students whose voting choices are not as clearly defined, student loans remain a varying concern.

Ben Schaefer, a senior mechanical engineering major, said they wouldn’t be a decisive factor in his vote, as his scholarships amount to nearly a full ride. Still, a candidate’s position on the issue may cause him to think twice before voting.

“Any presidential candidate who’s focused on education, and bringing it to more people … probably has their heart in the right place,” Schaefer said.

Janiya Molina, a freshman African American studies and criminology major, said student loans weigh on her mind heavily, and will be a major factor when she next goes to the voting booth.

For now, she values Andrew Yang’s “realistic approach” to tackling student debt. Yang, a political newcomer, has proposed the “10×10 Student Loan Emancipation Act,” in which the federal government would buy student loan debt from private lenders, allowing graduates to pay off their debts with 10% of their income for 10 years. After 10 years, the remaining balance would be forgiven, according to his campaign website.

“Forgiveness is a good approach,” Molina said. “I don’t think it’s realistic to just cancel it. It’s money and it doesn’t just go away.”