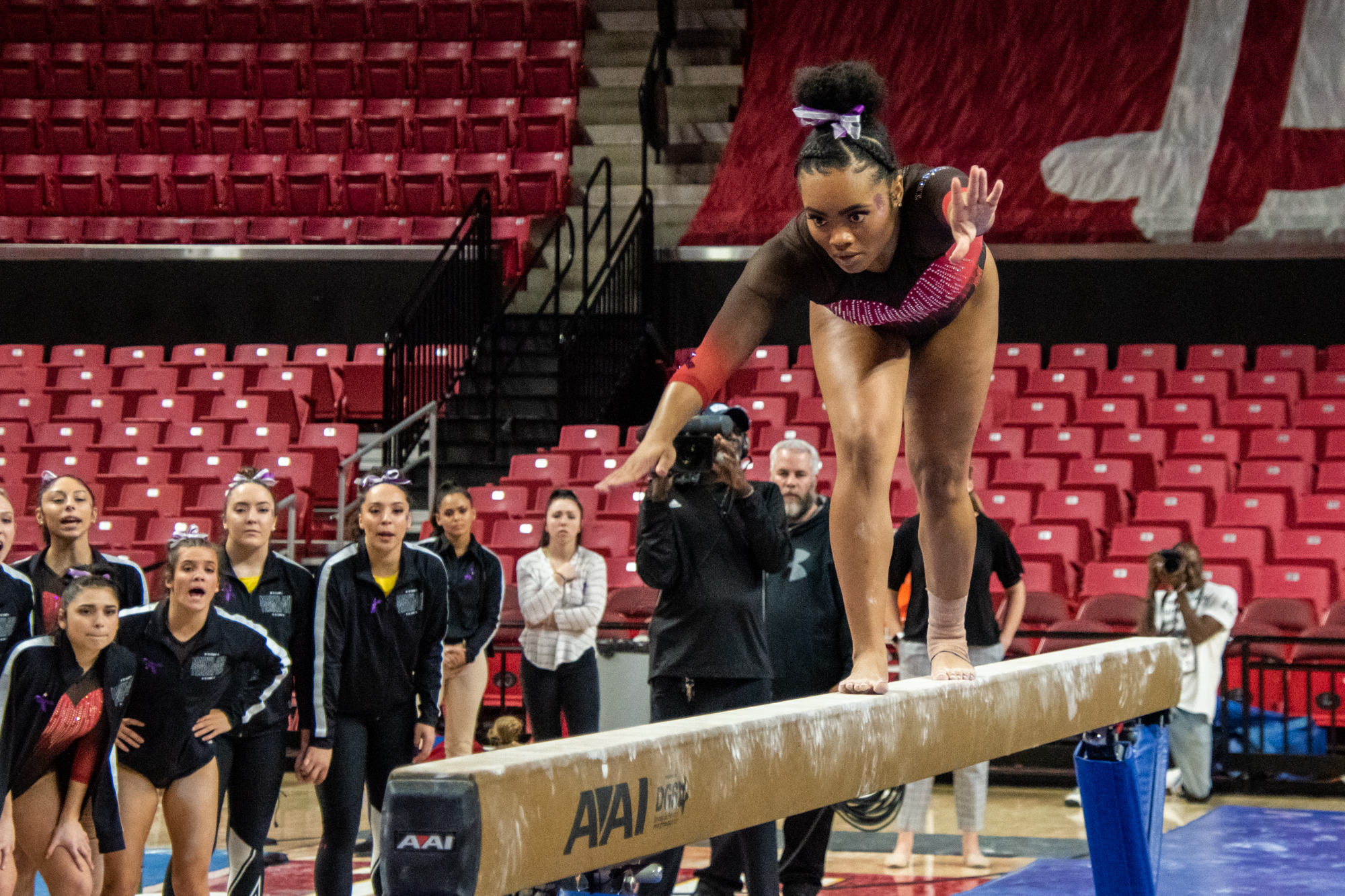 Sabriyya Rouse performs on the high beam during the gymnastics meet against Illinios at Xfinity Center on Feb. 2, 2020. (Joe Ryan/The Diamondback)

If performing only on vault, a gymnast spends about 10 seconds competing in a meet. And if a gymnast participates in all four events, they might devote between two to three minutes in front of the judges.

But no matter the length of time they spend actually competing, it’s nothing compared to the work put in at the gym during the week.

For hours upon hours in practice, they try to fine-tune stunts and routines for the few seconds they have to display them at a meet. And at this point in the season — where improved scores are needed to keep pace with the nation’s top programs — that time in the gym is focused on the small details that make all the difference in the final score.

“We’re trying to perfect everything while paying attention to detail,” junior Sabriyya Rouse said. “Each week, we want to become more detail-oriented.”

Rouse demonstrated her attention to detail on Sunday, scoring a career-high 9.900 on floor exercise. The 5-foot junior stuck the landing on each pass of her routine, which led the way for the Terps in the final rotation.

With meets solely on Fridays, Saturdays and Sundays, Maryland spends its weekdays preparing for moments like Rouse’s floor performance. Though the sport doesn’t allow for much video review, the Terps will take time out of practice early in the week to watch past routines.

That’s when they can look at the small technicalities that need to be addressed.

“We’ll watch our routines from the previous meet,” coach Brett Nelligan said, “and we’ll try and identify exactly where we could have grabbed a few extra tenths to increase our score. The majority of those come from landings.”

After Maryland’s high scores in its first two meets, the steadiness of landings was the most glaring area in need of improvement. Nelligan’s squad started emphasizing the importance of clean landings earlier in the season due to the hot start.

Now approaching their toughest stretch of the year — which includes this Sunday’s meet at No. 14 Nebraska — gaining extra tenths from clean landings is pivotal to stay on an upward trend. Nelligan and his staff have adjusted practices to accommodate that necessity.

“We really want to focus on landings this time of year,” Rouse said. “We’ll do a bunch of drills for those because it looks really nice when you stick at the end of your routine.”

With a depleted squad against Illinois, sophomore Sanya Glauber had to compete on bars for the first time in 2020, and the sophomore came away with a 9.825 thanks to a near-perfect dismount. Maryland’s practice regimen made for a seamless return to the bars, where she often competed last season.

Prior to Sunday’s meet, Glauber competed only on vault. And because the dismount is such a large part of the routine, sticking the landing is crucial for a high score.

“For vault, specifically, sticking is a huge part of the event,” Glauber said, “so coach will tell us that we have a certain amount of attempts to stick. If we stick a certain amount as a team, we might get rewarded.”

Honing in on the small details of the team’s routine fits perfectly in line with Nelligan’s goals in practice. He doesn’t care what his gymnasts are working to improve on, as long as they do so with as much effort as possible.

“Since the beginning of the year, we’ve just wanted to continue to work,” Nelligan said. “Practice is where we build confidence to perform on the weekend. I think they’ve done such a good job of that so far.”