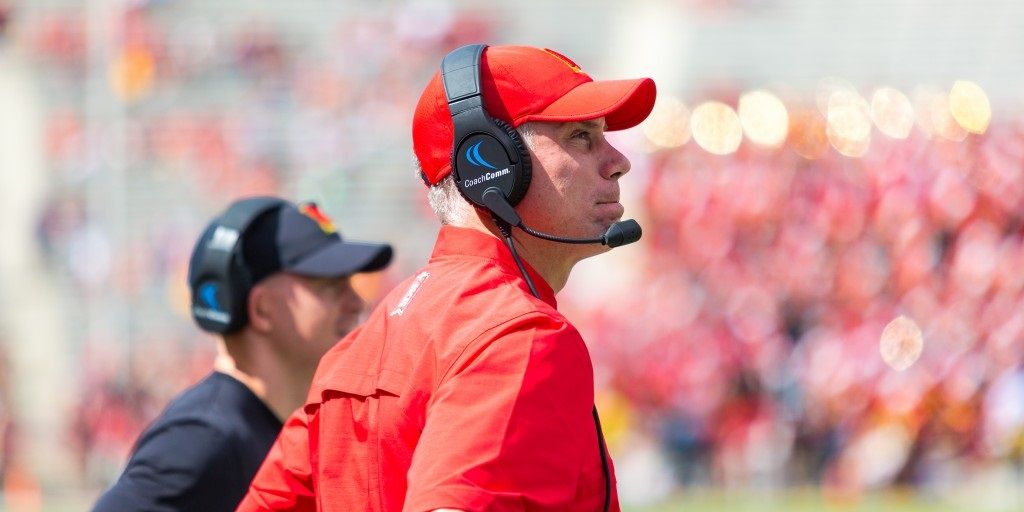 The fall after Jordan McNair’s death, my part-time job required me to attend every football game that season, arriving before the players. Before attendees arrived at every game, the players would enter and cross the field, many stopping to take a few seconds or minutes of contemplation at the large 79 — McNair’s number — painted on the field in his memory.

The players’ ritual that season was only one way the pain from McNair’s death manifested in the University of Maryland community. But all of that devastation has once again been overlooked, by both administrators previously close to DJ Durkin and by his new employer.

Just after the new year, former head football coach DJ Durkin — who was fired from this university after community backlash in October 2018 — was hired by the University of Mississippi as an assistant football coach. Durkin’s reentry into the world of football is concerning, but unsurprising. Last summer, he worked as a guest coach for the Atlanta Falcons’ training camp, and before that, as a consultant for the University of Alabama. His entrance into a permanent position is a logical next step in an attempted public redemption career arc, and it’s one made possible by the good ol’ boys club of college athletics.

Redemption may be the wrong term to describe Durkin’s creep back into coaching, as it implies he was ever held accountable for his inattentiveness. This university’s initial refusal to punish Durkin — for his failure to prevent McNair’s death, or for his connection to the subsequent accusations of abusive behavior within the program — has seemingly continued in helping him secure his new job at Mississippi. According to Ole Miss athletic director Keith Carter, the university “received consistently strong feedback about Coach Durkin’s strong character and work ethic and his positive impact on the communities and institutions where he was previously employed.”

Although Carter doesn’t directly name this university as an institution that gave Durkin a glowing review, Falcons officials admitted that they had conversations with this university about Durkin’s employment and still hired him. Regardless of this university’s involvement in his hiring, it’s evident that administrators and other coaches close to him are perpetuating a cycle of non-responsibility.

This university is not the first or the last to see a coaching scandal of this magnitude, nor is it the first to do everything it can to control public outrage while still protecting the coach. Former Penn State assistant football coach Jerry Sandusky, convicted in 2012 of sexually abusing underage boys, was protected by at least a few university officials, although the scale of the cover-up is still debated. In 2013, Rutgers University officials also saw accusations of negligence after video footage surfaced of former head basketball coach Mike Rice physically and verbally abusing players by yelling slurs, throwing basketballs and kicking students during practice.

This good ol’ boys culture of college athletic higher-ups protecting one another isn’t new, but it’s disappointing that Durkin is still benefiting from it, possibly due to university officials’ advocacy on his part. Durkin’s recent hiring is just another example of college coaches’ inviolable status, even in the extreme case of McNair’s death and the deep impact his actions left on the campus community.