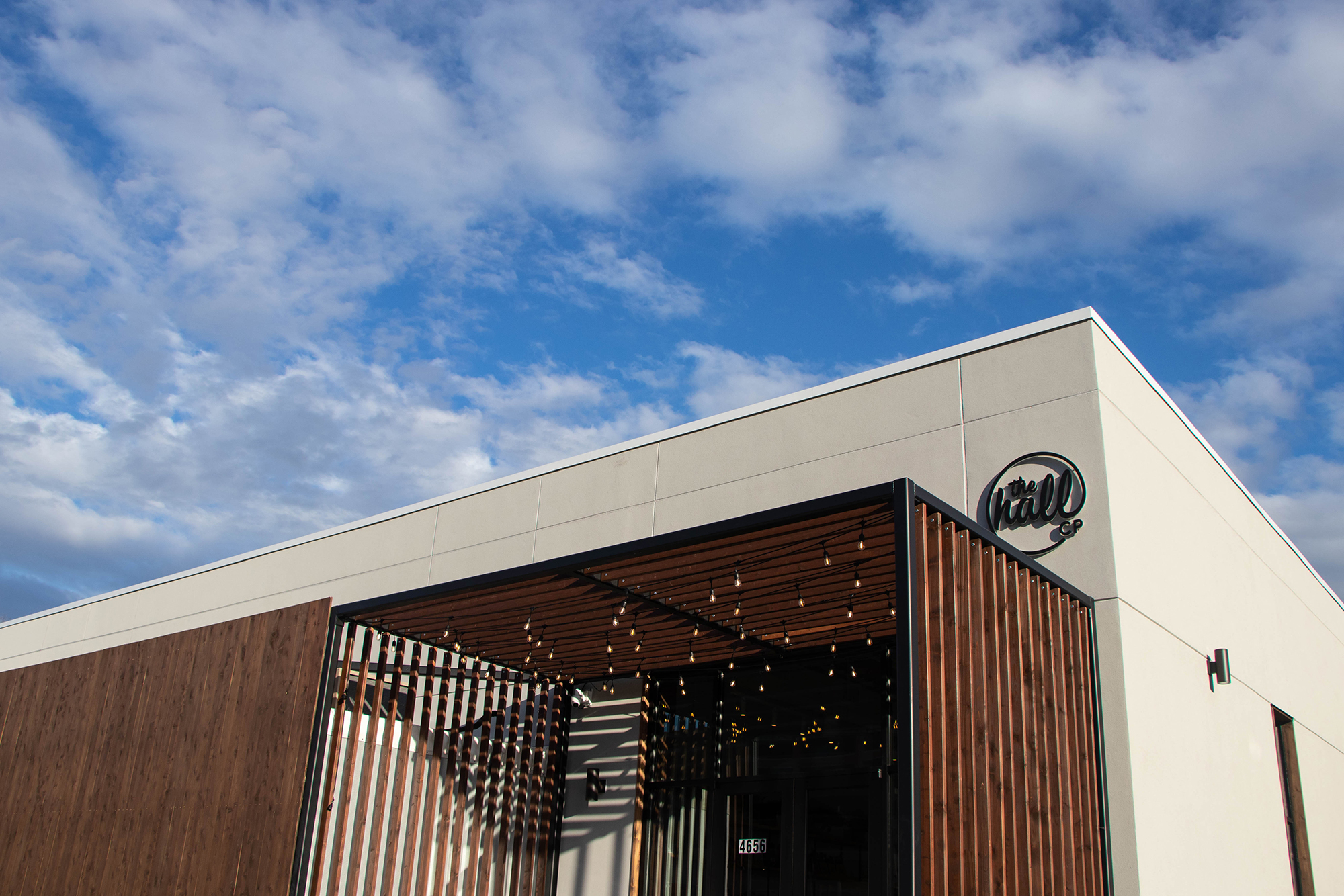 The Hall, a new dining and event venue, opened on Jan. 7, 2020 behind The Hotel in College Park. (Julia Nikhinson/The Diamondback)

Tucked behind The Hotel and WeWork, what was once a long-vacant building is now College Park’s newest restaurant and music venue: the Hall CP.

Opening just in time to replace MilkBoy ArtHouse — an eatery-concert space that closed in December — the Hall aims to be a one-venue-fits-all, “community-driven” establishment, according to a news release. Combined, its indoor and outdoor space spans 20,000 square feet and offers advertising space for events such as art galleries, concerts and fundraisers.

University of Maryland alumnus Scott Plank founded and developed the Hall CP along with other real estate ventures after leaving his executive position at Under Armour — a business founded by his brother, Kevin Plank, a fellow alumnus of this university.
The venue represents a permanent version of a pop-up food hall that Scott Plank’s investment company, War Horse Cities, set up in San Francisco in 2014.

“The Hall CP stems from a long-standing relationship between War Horse Cities and WeWork, resulting in an incredibly simple and successful concept that similarly brought the arts and tech communities together in a unique way in San Francisco,” Plank said in a statement. “Now, we’re bringing that concept to the heart of College Park.”

[Read more: MilkBoy ArtHouse closed, but Clarice performances are set to continue at its location]

Hall customers enter a lobby decked out in Maryland’s state colors, where they can order from a café or pizzeria. At the end of the main hall, the establishment’s ambiance turns on its head when the bar opens up for happy hour and the soft acoustic music of the day transitions to loud pop at night.

The establishment first opened its doors on Jan. 7. Its management team has been aiming for a gradual roll-out, slowly introducing the venue’s amenities one after another. At the front counter, a notebook titled “Customer Requests” sits out. So far, people have pitched ideas ranging from adding more egg choices to its breakfast menu to bike racks outside. Many of those who have already visited the Hall learned about the establishment through connections with its team.

Last semester, Plank — who earned a degree in urban planning from the university — spoke at the architecture school’s commencement. He invited the school’s associate dean, Madlen Simon, to tour the Hall after his speech — and she returned on Saturday to try one of the Hall’s poke bowls.

“I think it’s a great addition to College Park,” Simon said of the Hall. “I think every addition, to bring something new and different, is a great thing.”

Alex Straub, a freshman computer science major, checked out the Hall after watching its transformation from an abandoned building to a populated restaurant. He brought along Geo Lim, a freshman mechanical engineering major, who was happy to get out of the university dining halls.

[Read more: Workspace and business services provider WeWork will move to College Park in the fall]

Straub and Lim enjoyed their food, but left confused; their meals included ingredients that weren’t listed on the menu. Lim, who ordered tacos, was surprised to find rice and beans on his plate.

“It was a good surprise, but [the menu] could have mentioned that,” Lim said.

Over the course of the next few weeks, as the city continues to get acquainted with the Hall, Sammy Popat — the university’s campus connector and Discovery District manager — hopes to see it slowly become the “epicenter” of the Discovery District.

Popat said the companies that sit behind The Hotel go largely unnoticed, but he thinks the Hall is an opportunity to attract students to the Discovery District and introduce them to its resources.

“We know this will help us bring students across the street and help them to see all that is happening here,” Popat said, pointing out the WeWork, the Capital One Tech Incubator and the software company Immuta, all of which hide behind The Hotel. “What we’re hoping to totalize is a greater focus around community that is broader than just the university.”