As other NCAA programs stick with singlets, Maryland wrestling is in a league of its own 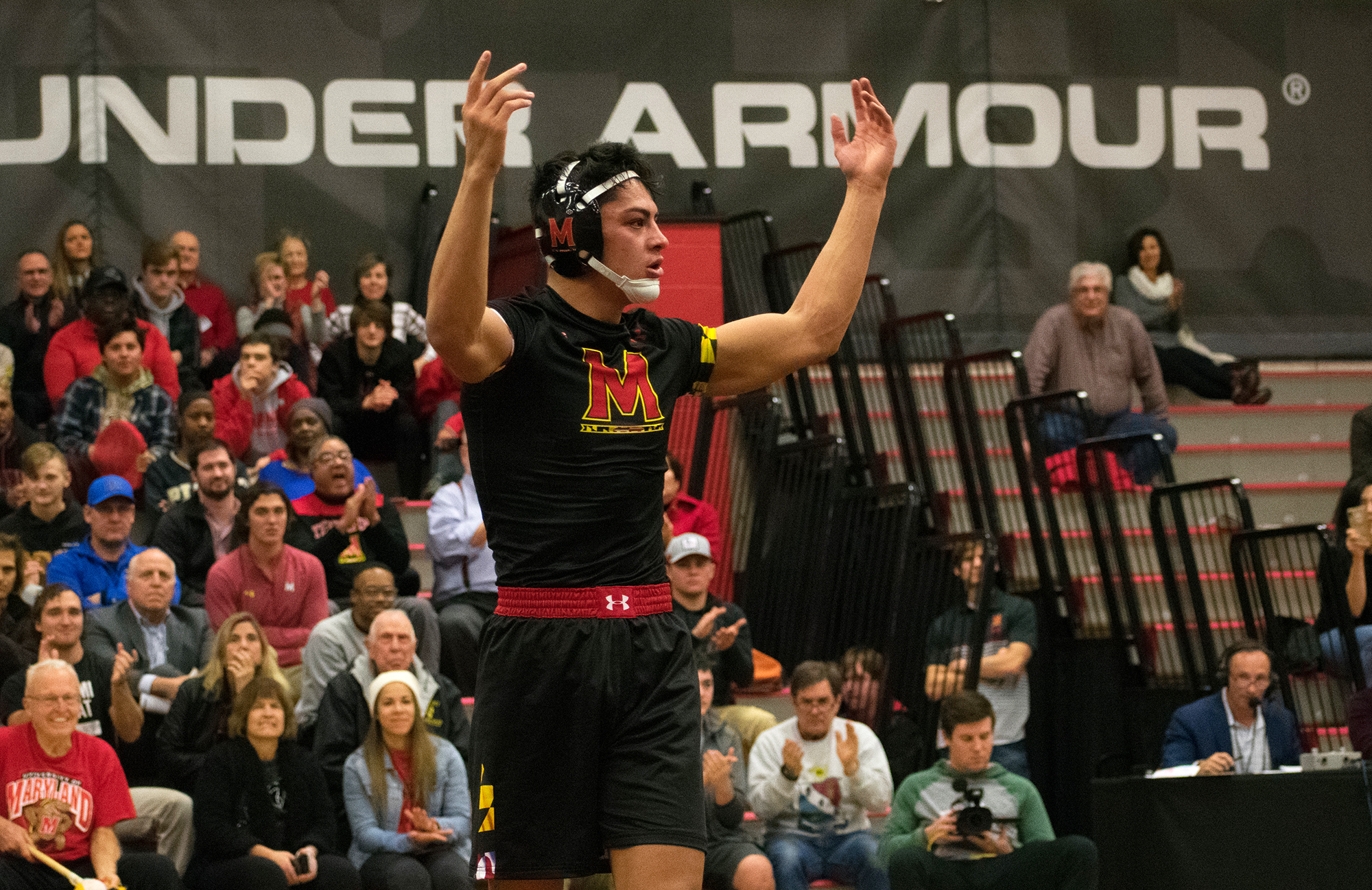 Maryland wrestling sporting its new uniform during a dual against Pittsburgh — an eventual 27-10 loss — on Dec. 20, 2019. (Tyler Ecker/The Diamondback)

When Maryland wrestling battled Rutgers on Dec. 7 in Alex Clemsen’s first Big Ten dual as the Terps’ head coach, his team was looking to break a conference losing streak that dated back to January 2016.

Maryland’s Big Ten struggles continued, though, as it fell, 28-11. But when the team stepped onto the mat, it was in a way no other NCAA Division I program had done before: with two-piece uniforms and loose-fitting shorts.

The new uniforms — a form-fitting “M” logo shirt with loose-fitting Under Armour shorts — have been the attire of choice since then. Players and coaches have grown accustomed to the change, despite it straying from the current norm in college wrestling.

Fan-friendly has been the M.O. for the Terps when it comes to the new “fight kits,” something high school programs are wearing more frequently across the country.

Since Clemsen’s arrival at Maryland, he has looked at finding ways to not only grow the program, but the sport as well.

“For people who don’t love wrestling, they always make comments on the singlet,” Clemsen said. “They call it anything from things that I won’t repeat in an interview to a leotard, but fight shorts and a rash guard [shirt], you see that all the time in the UFC and Brazilian jiu-jitsu tournaments.”

Although it took a while for the change to be implemented, Clemsen and the team aren’t surprised by it.

Clemsen spoke about the inability of organizations, including the NCAA, to continue progress, but he said changes in recent years — including the new uniform rules and the addition of women’s wrestling — are positives for the sport.

“I think moving away from the singlet, especially in the younger divisions, is a really, really smart move,” Clemsen said.

Maryland planned to break out the look from the start of the season but needed to alter the uniforms slightly. However, when the team first found out about the new look, not every wrestler was on board.

“Initially, I wasn’t a huge fan of it because just growing up, I’d always worn a singlet,” 141-pounder Hunter Baxter said. “We always thought that the kids wearing the two-piece singlet were the weirdos.”

Tradition plays a large role in what uniforms are worn because college wrestling programs are often recognizable from their singlets. However, some Terps welcomed the change from the jump.

“I was super excited to wear the two-piece … I just like the way they look,” 157-pounder Jahi Jones said. “Being the first Division I team to wear the [new] two-piece singlets, that’s also cool.”

Jones and his roommate, 197-pounder Jaron Smith, both won their first few matches in the new uniforms.

Jones also talked about the team being pioneers for the sport, breaking previous traditions and making something all their own — and he and Smith aren’t the only two who like the change.

Eventually, everyone got on board, regardless of what their initial thoughts were of the switch. Above all, the comfortable fit was what turned heads.

“[The one-piece singlets] were really tight and constricting. It was hard to put on, hard to breathe,” Baxter said. “I like the way [the fight kits] feel. They’re pretty loose.”

Comfort and success are both important, but Jones, Smith and Baxter each said that growing the sport is the main goal of the change.

The fight kits are a departure from the norm, but there’s hope that, over time, this could be the change that helps take wrestling to the next level.

“It’s a very exciting sport. There’s a lot of action. It’s fun to watch,” Jones said. “I feel like a lot of people don’t get to see that because they don’t ever buy in because of the one-piece singlet. I feel like it’s a great opportunity to grow the sport because they’ll be more willing to watch, and once they start watching, hopefully, they’ll be like, ‘Wow, that’s cool!’”

Maryland’s recent successes have gone hand-in-hand with the new look, but time will tell for the rest of college wrestling. For now, the Terps are embracing the deviation.

“As long as the guys like it, we’ll probably continue to wear it,” Clemsen said. “We’ll see.”