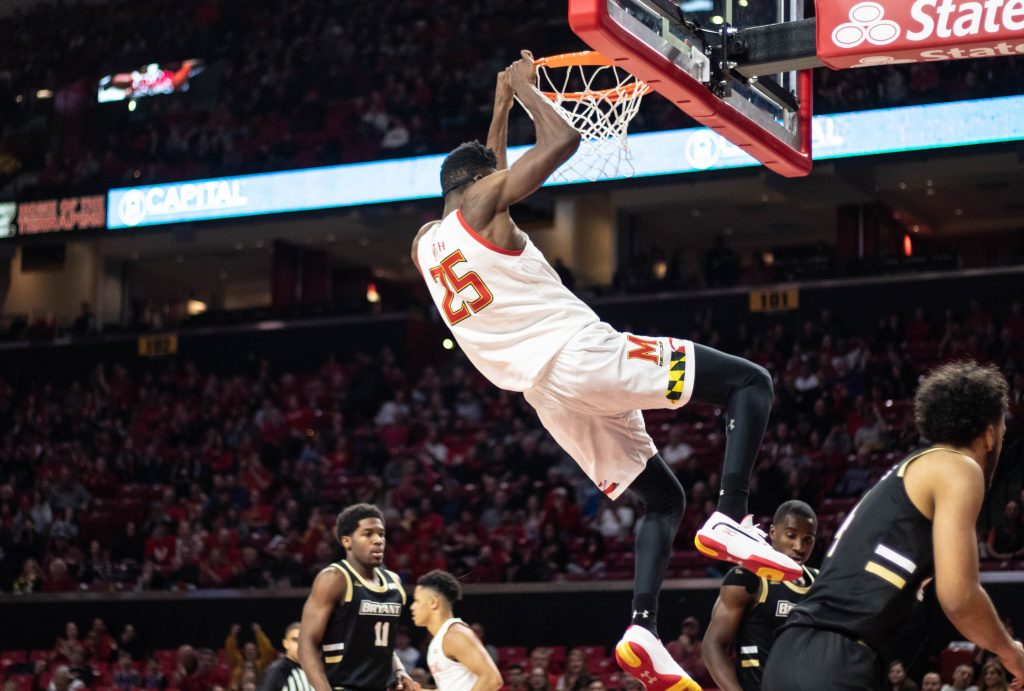 Forward Jalen Smith hangs on the rim after a dunk in Maryland men's basketball's 84-70 win over Bryant at Xfinity Center on Dec. 29, 2019. (Julia Nikhinson/The Diamondback)

Maryland men’s basketball continued its slide down the AP Top 25, falling two spots to No. 15 this week.

San Diego State (13-0), meanwhile, maintained its undefeated start to the season, propelling the Aztecs from No. 15 to No. 13 this week. Michigan State (10-3) also jumped ahead of Maryland to No. 14 on the strength of a runaway 95-62 victory over Western Michigan on Sunday.

The Terps (11-2) won their only game of the past week with an 84-70 win over Byrant on Sunday in their final nonconference game of the regular season.

Coach Mark Turgeon’s team now turns its attention to conference play for the remainder of the campaign. Maryland split the two-game Big Ten teaser in early December, beating Illinois at home before losing its first game of the season against Penn State on the road.

With the exception of the Spartans (2-0 Big Ten) and Northwestern (0-2 in the conference), every team finished December’s two-game conference cameo with a 1-1 record.

Six Big Ten teams are ranked inside the Top 25 as the calendar flips to a new year and Big Ten play begins in earnest.

Michigan State and the Terps entered the season as the premier teams in the conference, but now sit behind Ohio State (No. 5) and Michigan (No. 12) in the rankings. Penn State (No. 21) and Iowa (No. 23) round out the group of ranked teams.