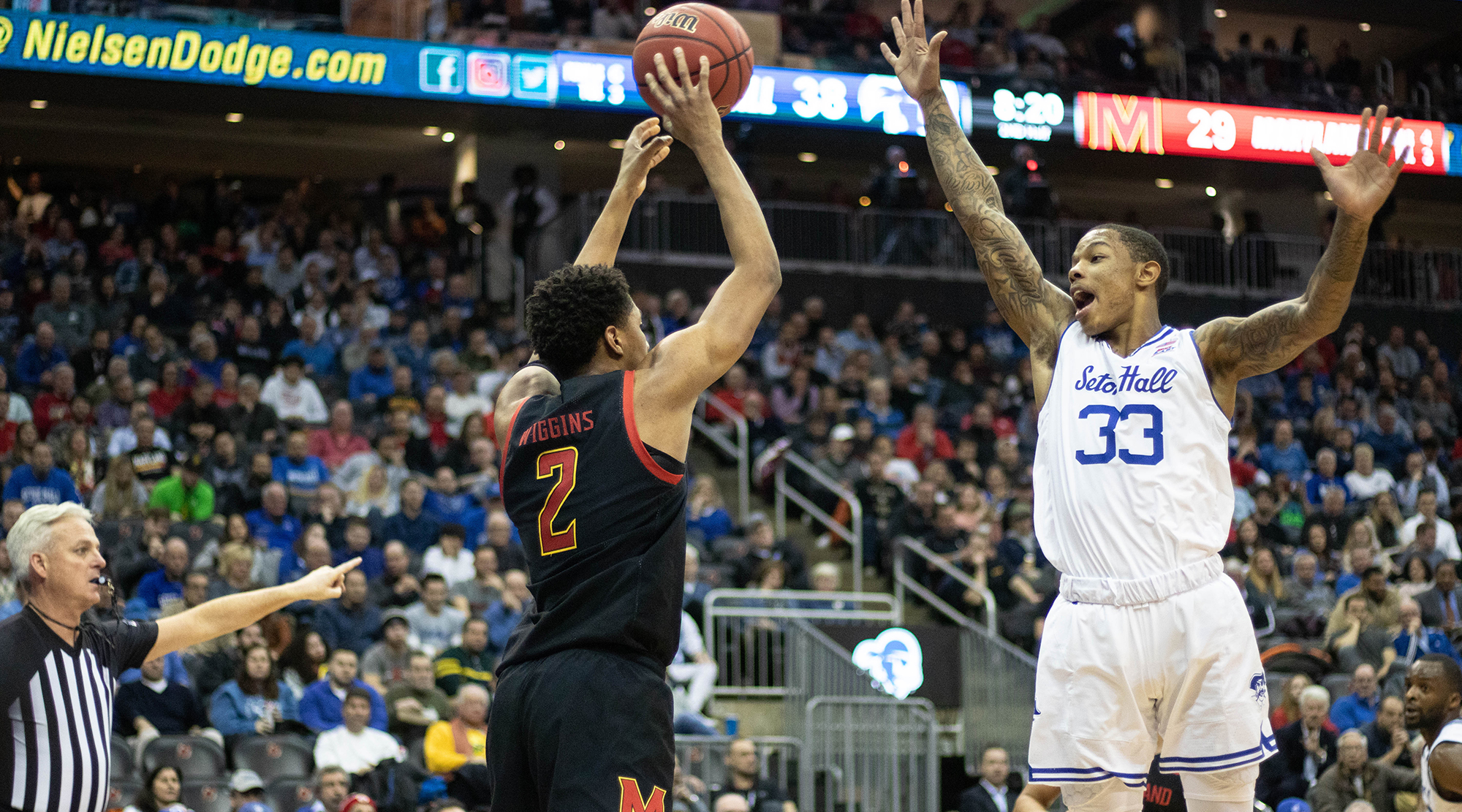 NEWARK, N.J. — Mark Turgeon was coy about the specifics, but he admitted his team took a lot of shots during its nine-day break for final exams. Maryland men’s basketball had shot just 33 percent in its seven-point loss to Penn State, about 10 percentage points below its season average entering that matchup.

But even that season average — 43.5 percent — didn’t always match the output expected of the No. 7 team in the country. And Turgeon admitted as much.

“We haven’t shot the ball well this year,” the coach said after Tuesday’s practice. “Maybe that’s who we are. I don’t know. We’ll see.”

What the Terps saw in the first half at Prudential Center against Seton Hall on Thursday seemed to suggest that’s exactly who they are. The arena rang to the sound of clanks. Through the first 17:55, Maryland shot 3-for-22. If not for a sudden spurt of three straight makes to close the half, the deficit at intermission could’ve been far more severe than nine points.

That deficit soon ballooned once more to as many as 14 in the second half, the scoring droughts returned, and the team shot only marginally better in the second half of its second straight loss. It is only December, and two losses don’t make a season.

But with another horrid shooting display — Maryland finished at 27 percent, scoring fewer than 50 points for the first time since 2013 — questions linger about how effective this offense can be. And when Turgeon fielded those questions Thursday night, the ninth-year coach pointed to a variety of issues.

“A lot of things,” Turgeon said. “One, we have a lot of guys playing with no confidence. We’re not making very good decisions. And tonight, our execution wasn’t very good. They were coming out of timeouts and running plays wrong, so I’ve got to get that fixed.”

It’s that sudden lack of confidence, though — evident through ice-cold shooting and poor decision making — that marks the largest difference from where this team was during its 10-0 start to the season. In the Orlando Invitational, clutch plays late and guard Anthony Cowan’s dominance helped pull out victories over Temple and Harvard.

The Terps erupted in the tournament final, securing a 21-point victory over Marquette on 47.7 percent shooting. And against Notre Dame three days later, Maryland again dominated.

But then Turgeon’s squad squeaked past Illinois with a one-point win, needing Cowan to play savior as the clock wound down. Then came the loss in State College, and now a second consecutive one with guard Aaron Wiggins serving as the lone Terps player to make four baskets.

“A few of the guys might’ve gotten a little comfortable, thought that wins would come easy,” Wiggins said. “We can’t rely on Ant, we can’t rely on Turg, to come up with those plays to where we win late in the game. We have to come out of the gate … and be ready to play.”

If it hadn’t been for Seton Hall’s own periodic offensive woes as it maneuvers without its two best scorers — Myles Powell is out with a concussion while Sandro Mamukelashvili has a fractured wrist — Maryland’s 10-minute field-goal drought in the first half might have pushed the game out of reach.

The Terps hung around, however, and even had a chance to tie things with just under 36 seconds remaining. Trailing by three with an inbounds play underneath the basket, Turgeon dialed up a play. As Seton Hall guard Anthony Nelson recalled, he expected Maryland to look for Wiggins in the corner. The Pirates switched to a 2-3 zone, and instead of aiming for Wiggins, Nelson noticed forward Jalen Smith pop out.

Darryl Morsell’s pass was underthrown, and Nelson nabbed the steal. To Turgeon, it was another instance where his team didn’t execute when needed.

The Terps didn’t pull off that one, nor did they manage to climb back after Nelson missed his ensuing free throw. There were issues all over — from execution to decision making — but that lack of confidence was the most noticeable difference from earlier games.

“We’re not playing with a lot of confidence right now, and I’ve got to figure out a way to give our guys confidence,” Turgeon said. “We don’t even look like the same team we were three weeks ago.”