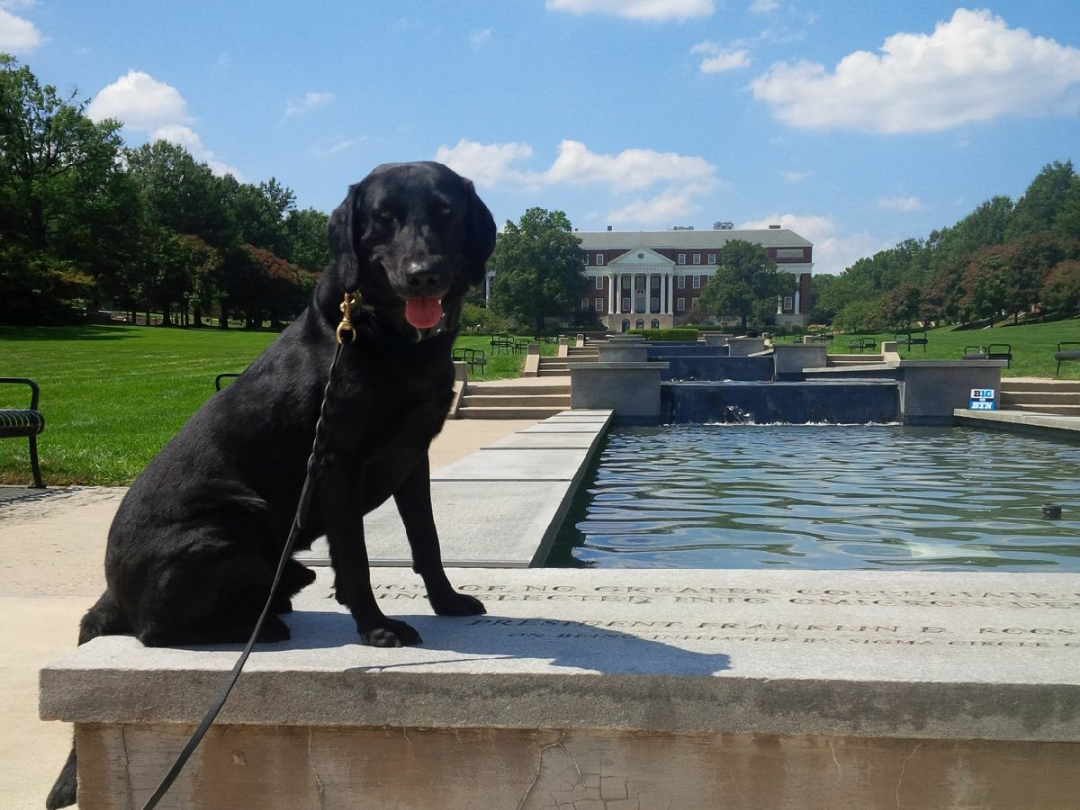 Chief, an explosive detection K-9, sits on top of the fountain at McKeldin Mall. (Photo courtesy of UMPD)

Basketball games tend to be “all hands on deck” for a crew of black labradors who work for the University of Maryland Police Department, Sgt. Matthew Suthard said. But as the Terps went up against Illinois on Saturday at Xfinity Center, the officers were one dog short.

Chief, an explosives detection K-9 for University Police, lost his battle to cancer on Friday after he was diagnosed last year.

“He was just a big, old dog that was powerful and easygoing at the same time,” Suthard said. “It’s the perfect dog.”

Chief was born in 2010 in Southern Pines, North Carolina. He landed a position on campus in 2012 through a partnership between the Department of Homeland Security’s Science and Technology Directorate and the Johns Hopkins Applied Physics Laboratory, according to a press release from University Police.

Alongside his four-legged colleagues — Bracken, Pink and Jimbo — Chief was trained in explosives detection, according to the release. Chief is the first University Police K-9 to pass away in the line of duty.

Suthard described Chief as the “Cadillac of working dogs.” He was excited to work, Suthard said, and he always wanted to satisfy his handler, Cpl. Jason Ottey.

Chief lived at home with Ottey, his wife and their dog, Cooper. Suthard, who handles Jimbo, said that the K-9s become part of the family. Ottey described the joy working and training with dogs brought him when interviewed by The Diamondback in 2018.

“I can’t imagine doing anything else,” he said. “It is literally the best job in the world.”

[Read more: Meet Spud, a good boy who will soon be the youngest dog in UMPD’s K-9 Unit]

And Chief was devoted to Ottey. Suthard said the dog’s dependence on his handler always made him laugh — when Ottey left a room, Suthard said Chief would whine and whimper until he returned.

In addition to working football and basketball games, Chief also helped keep campus safe when notable figures would visit, including former president Barack Obama and the Dalai Lama, according to the release.

Chief has also assisted in security outside of the campus community. He performed explosives detection sweeps at Baltimore-Washington International Thurgood Marshall Airport, FedEx Field and Merriweather Post Pavilion, according to the release.

The pup was always ready to work. When it was time for the lanky labrador to exit his kennel, Cpl. Evan McCann said Chief would shoot up. The black dog hopped so high, McCann said he almost reached eye level.

“He would almost be looking like he was a fish out of water,” said McCann, a pawprint-shaped Maryland flag patch on his beanie. “His first handler called him a ‘land dolphin.’”

McCann said his dog, Bracken, got along well with Chief. McCann helped to keep watch over the two of them when Chief’s first handler left the department. Since Chief was drawn to people, McCann said, the dog would push Bracken out of the way whenever she approached him for pats.

Suthard said he doesn’t know how other dogs in the unit will react to Chief’s absence. They’re working dogs, he said, so they have a high energy drive; they want to work and play because it’s in their breeding.

However, he said he’s sure that Cooper will notice that Chief isn’t coming home anymore. The dog probably looked at Chief “like a brother or a friend, or however dogs look at it each other,” Suthard said.

“You wanted every working dog to be like Chief,” he said.
Please support our journalism by donating to The Diamondback.
Categories:
Tagged: