Meet Spud, a good boy who will soon be the youngest dog in UMPD’s K-9 Unit 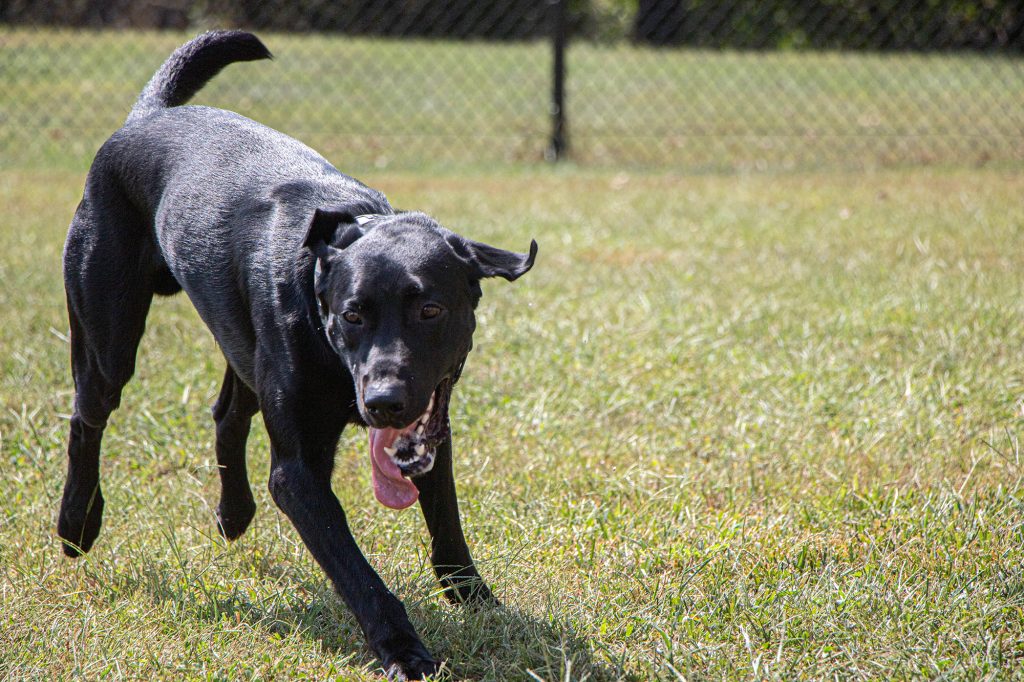 Spud, the 65-pound black Labrador just weeks away from completing a 12- to 14-week training program to become one of the newest certified members of the University of Maryland Police Department’s K-9 Explosives Detection Unit. (Julia Nikhinson/The Diamondback)

He’s not allowed to sit on the couch, play with toys, or eat people food. He’s high-energy, and his partner said he can sometimes be a pest.

But in October, he will become one of the newest certified members of the University of Maryland Police Department’s K-9 Explosives Detection Unit.

Meet Spud — the 65-pound black Labrador just weeks away from completing a 12- to 14-week training program, an expert at sniffing out bombs and other explosive devices.

At about 1 ½ years old, Spud will be the fifth — and youngest — dog in the K-9 unit. He’s also the first pup to be trained in-house by University Police. His older canine partners were trained in North Carolina after the unit was created in 2012.

Spud arrived at the department when he was about 7 ½ weeks old, and was placed with his partner, officer Patrick Dykstra, in late June. In his eight years with UMPD, Dykstra has rotated between several different units — but he said working with Spud has been his most challenging role on the force yet.

“It’s way tougher than I thought it was going to be,” he said. “This is harder than going to a four-week tactical school by leaps and bounds. It’s much more mentally taxing — you can’t turn your brain off.”

Spud’s explosives training started in June, but officer Evan McCann said the unit started preparing the dog for work long before then, reinforcing his “natural desire” to hunt.

The training started out at a “very slow crawl,” Dykstra said. In the beginning, he said a lot of time was spent on honing Spud’s obedience. It also took some time for the pair to get used to living together at Dykstra’s house.

Next, trainers introduced Spud to the odors associated with explosives, and what to do when he smells a device. As the training progressed, Spud learned to detect smaller and more complex explosives in more difficult locations.

It’s important to keep dogs guessing during training, said Sgt. Matthew Suthard, the K-9 unit’s supervisor. One day the unit may search vehicles, the next they may search buildings on campus. Last week, the dogs visited Baltimore-Washington International Thurgood Marshall Airport to train.

The K-9 unit exists as a safety precaution on campus, Suthard said, so the dogs are supposed to detect explosives, not drugs. They’re also trained to sniff the air, rather than people. Suthard said it’s important that police train for an evolving threat landscape.

A big part of the dog’s purpose is to serve as a deterrent, he said.

“Hopefully the bad guy comes there and says, ‘Oh, no, they’ve got a bunch of dogs running around, I’m going to go somewhere else, or I’m not going to do this today,’” Suthard said. “Maybe that happens, but you’ve got to be prepared and you’ve got to train like it’s going to happen and that’s the whole reason we’re here, to hopefully stop it.”

Dykstra said he first applied to the K-9 unit in 2015, but was passed over — looking back, he thinks he was probably too young and inexperienced. When considering applicants, Suthard said he looks for officers with the high-drive, maturity and athleticism to properly care for a dog. K-9 officers are also required to live within 35 miles of the university, and be able to have their furry partners live with them, he said.

This time around, Dykstra was chosen to be Spud’s partner. It’s a different experience than working with another officer, Dykstra said — for one, the two can’t discuss things that come up in their training.

“I would like to have a conversation with him,” Dykstra said. “Like, ‘Hey, what happened that time? What were you thinking? What did you smell? Was it a hot dog or was it explosive odor?’”

Still, in the three months they’ve worked together, Dykstra said he and Spud have become “best Spuds.” He said Spud is a “Velcro dog” — he became attached to his handler. At home, his wife calls his four-legged partner “Spud Muffin.”

The magnitude of his responsibility hasn’t been lost on him, though: At the end of the day, Dykstra said, Spud is a tool to help the force detect explosives. He has to give careful thought to how he takes care of the dog at home, making sure to feed and exercise him properly so he doesn’t disrupt Spud’s police training.

But Dykstra said working with Spud has resulted in some of his most rewarding experiences so far in law enforcement.

“When he finds odor and recognizes it, indicates, and I didn’t know that the odor was there . . . that’s probably one of the top ten feelings in police work as a whole so far,” he said.