“The best job in the world”: Four UMPD officers train alongside four-legged friends 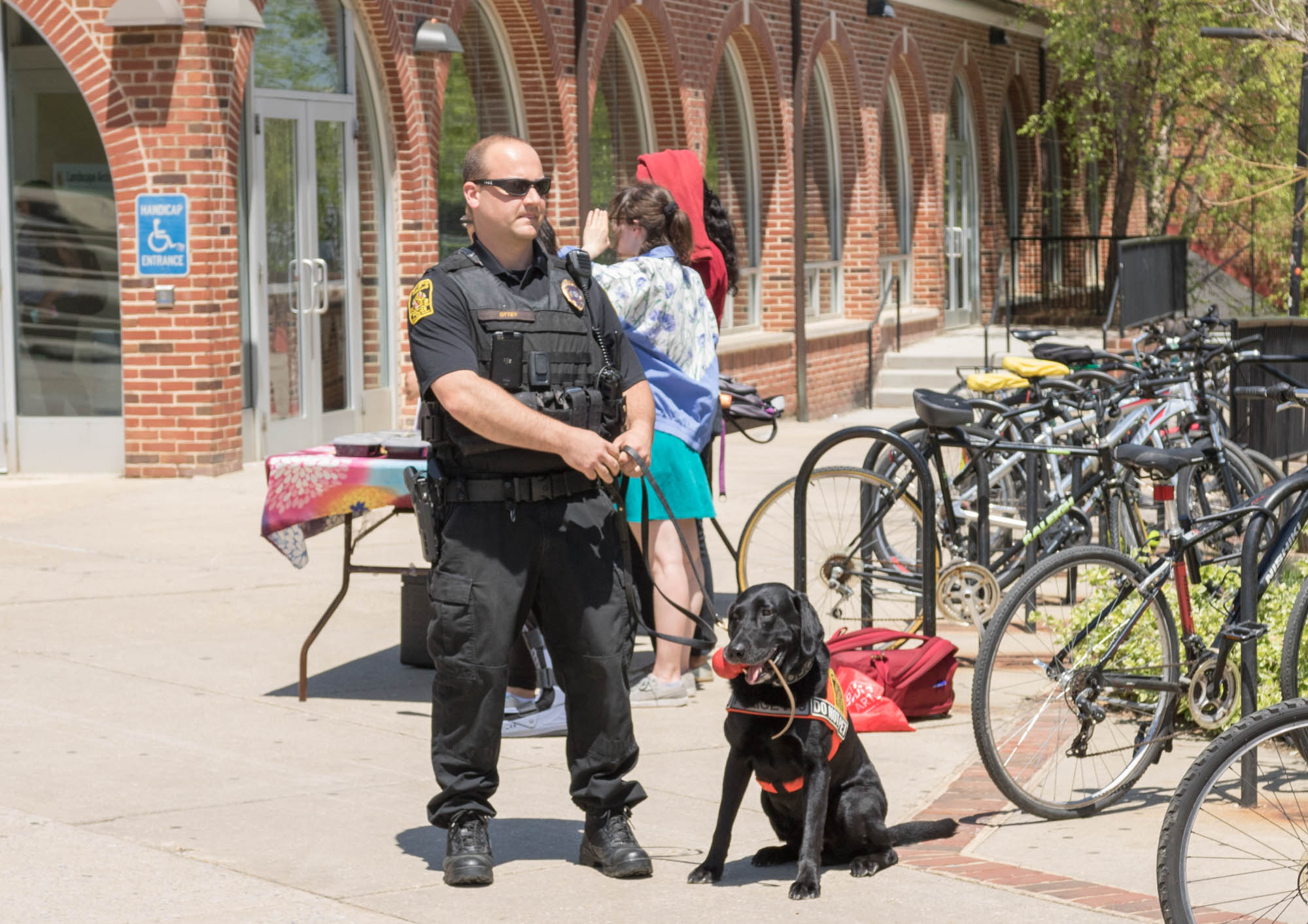 Cpl. Jason Ottey rewards his police dog during traning outside STAMP on May 2nd, 2018. The dog had just successfully identified a decoy.(Richard Moglen/The Diamondback)

A black Labrador hangs its head, wags its tail and circles around the bus stop outside Stamp Student Union on a sunny Wednesday afternoon, its owner loosely holding onto its leash.

University of Maryland Police Cpl. Jason Ottey looks on at his four-legged partner, Chief, who’s wearing an orange vest with the words “Do not pet” and a stapled-on police badge, as students mill by. Chief sniffs and turns, uninterested, before bucking at a man who’s brushed by on his blind side, then chasing after him in hot pursuit.

Chief has just completed his weekly training with Ottey, participating in a police dog practice drill offered at only a few universities in the country, said Sgt. Matthew Suthard, the K-9 Unit supervisor.

Suthard, who attended with his own police dog, Jimbo, said the training the dogs receive is “a newer, rarer type of capability.”

“There’s only three to five [colleges] in the entire country with this capability,” he said.

[Read more: After a spike in hate bias incidents, UMD’s police chief spoke about how to cope]

The drill, known as Person-Borne Improvised Explosive Device training, is 10 to 15 years old, Suthard said, and the University of Maryland Police Department was the first university department in the nation to add the practice to its K-9 Unit in 2012, when it was created.

The officers learn skills, too, he added. When the K-9 Unit was created six years ago at this university, the department sent its officers to K2 Solutions, a training branch and police canine supplier in North Carolina, where they completed a 14-week training course with their new canines.

Suthard said officers learned to “read the dog,” as well as how to provide the animal’s medical care and teach basic dog obedience.

“It’s almost a whole different job than being a patrol officer — you are responsible for a living, breathing animal,” Suthard said. “You learn what makes them happy and learn how they work, and it kind of makes you happy when they do a good job, and you develop a bond.”

Ottey, who has been with Chief for three years and did not attend the original training in North Carolina, said working and training with the dogs is “more enjoyable when you are a dog person.”

“I can’t imagine doing anything else,” said Ottey, a self-described dog person. “It is literally the best job in the world.”

Suthard said the weekly training is a refresher for the dogs to stay on top of their game. It’s important the dogs are prepared for big events, such as football games and mid-size events on campus the K-9 Unit patrols, he added.

“It’s more of a preventative measure — obviously in today’s world, terrorism is a big factor,” Suthard said. “Where you have a mass amount of people, whether it be a daily school day, a football game or basketball game, the threat [could be] there.”

While the training is still important, Suthard said there has never been a case at this university where a dog has sniffed out a real threat involving explosives, and that it’s nearly as rare throughout the nation.

Still, the dogs continue to run through other weekly explosive detection drills, such as bus and vehicle training and luggage searches. Besides the weekly training, the four officers on the K-9 Unit are always with their dogs, even if they are substituting for normal patrols, or heading home for the night.

“It’s a 24-hour, seven day a week commitment,” said Cpl. Evan McCann, the unit’s training instructor, who has a chocolate Labrador named Bracken. “But it’s probably one of the best jobs. … That’s what most guys who have been in the canine unit would say.”