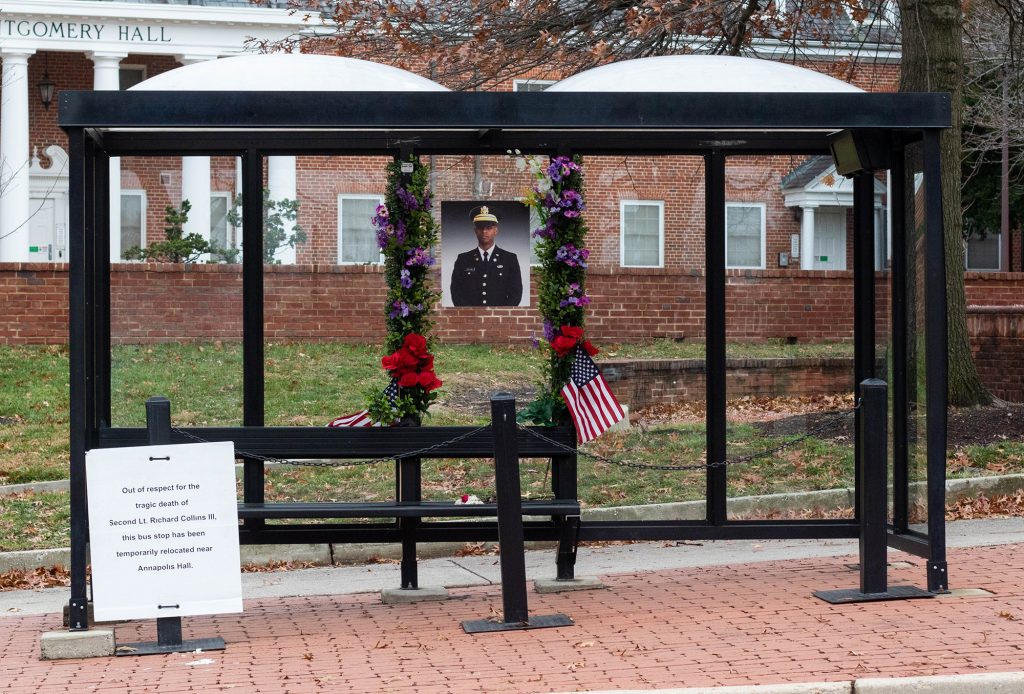 The bus stop in front of Montgomery Hall where police say Sean Urbanski fatally stabbed Richard Collins of Bowie State University in May 2017. Urbanski's murder and hate crimes trial is set to begin on Dec. 9 after being delayed four times. (Julia Nikhinson/The Diamondback)

After nearly two years of delays, the trial for the former University of Maryland student charged in the killing of 2nd Lt. Richard Collins is set to begin in less than a week.

Sean Urbanski will face murder and hate crime charges in the death of Collins, a black Bowie State University student who was days away from graduating when he was fatally stabbed on this university’s campus in May 2017.

The trial — which was pushed back four times — was originally scheduled to begin in January 2018.

In recent weeks, there’s been last-minute disputes between the prosecution and defense over witnesses and testimony. And for the first time, the defense has denied that Urbanski was a member of a white supremacist Facebook page called “Alt-Reich: Nation” — something the prosecution has long used to bolster the argument that the killing was racially motivated.

On Monday, Judge Lawrence Hill granted Urbanski’s lawyers’ request to bar an expert in racism and hate groups from testifying at the trial, said a state’s attorney spokesperson. As first reported by WTOP, the state had filed a notice in early November that it would call Jessie Daniels, a professor at Hunter College in New York who studies racism and the internet, to the stand.

In a motion filed Nov. 13, the defense argued that the state’s notice didn’t give enough time to find their own expert witness or prepare counterarguments. And because the case already had a “tortured history” of delays, the motion read, it wouldn’t make sense to wait any longer.

Additionally, defense attorneys William Brennan and John McKenna argued that Daniels’ testimony wouldn’t be relevant to the case, writing that it was just an effort “to call the Defendant a racist.”

“Calling the expert would do nothing but confuse the jury,” the motion read.

There are also questions surrounding whether Urbanski’s ex-girlfriend will testify for the defense. She is a college student in California, according to WTOP, and her lawyer says she doesn’t have any relevant testimony to provide.

In June, Hill struck down three motions from Brennan and McKenna. The attorneys wanted Urbanski’s hate crime charges dropped — and if that didn’t happen, they wanted two separate trials for the murder and hate crime charges.

The defense also asked Hill to disallow racist images from Urbanski’s cellphone, arguing they weren’t relevant to the case and would unfairly prejudice the jury against him. Urbanski was “out-of-his-mind drunk” and “screaming incomprehensibly” at the time of the killing, the defense said, maintaining that Collins’ race wasn’t a factor in the killing.

But the state saw it differently.

“The stabbing of Lt. Collins was based on the defendant’s racial bias toward black people,” Jason Abbott, one of two prosecutors for the state, said during the motions hearing. “[The images] show why the only black person at the bus stop that day was stabbed.”