“We are Lt. Collins”: UMD and Bowie State students gather for panel on racism 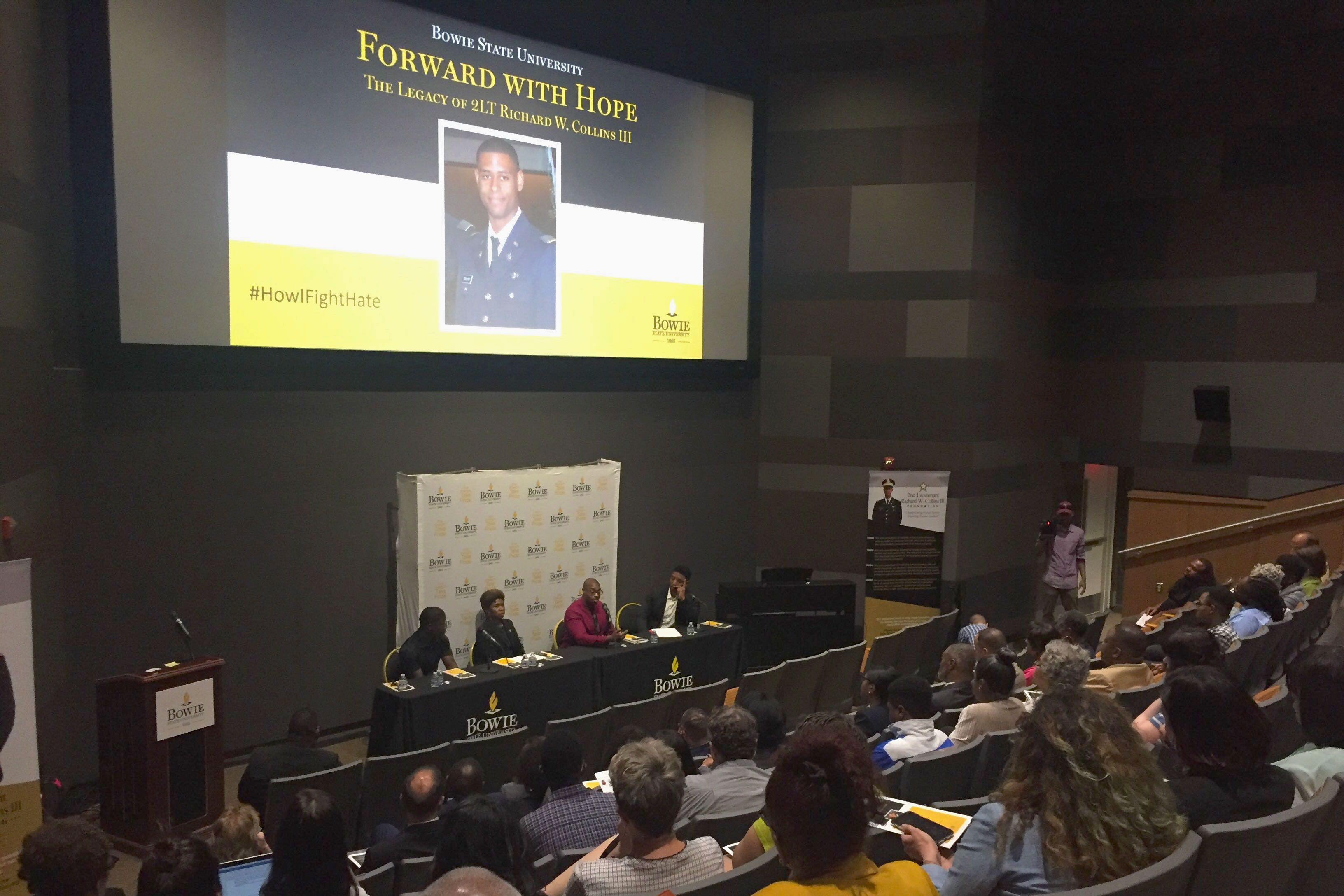 University of Maryland and Bowie State University students gathered for a panel discussion on social justice in honor of 2nd Lt. Richard Collins, who was killed in May 2017. (Victoria Ebner/The Diamondback)

On the night of May 19, 2017, Dawuda Amadu’s phone lit up with a text from a group chat of other cadets in Bowie State University’s ROTC program.

2nd Lt. Richard Collins wanted to know if anyone was up for a night out in College Park. They weren’t; Amadu said they were away for training at the time.

Later that night, he was stabbed to death while waiting for an Uber on the University of Maryland’s campus. Sean Urbanski, a former student at this university, is awaiting trial on hate crime and murder charges in the killing.

Two years later, Amadu stared out into a crowd of at least 100 people who came together in a gathering of the Bowie State and Maryland communities. He hasn’t forgotten that it really could have been any student of color who was killed that night — including him.

“We are Lt. Collins,” he said. “We really are — we are young, our lives are ahead of us, and it was just a matter of anyone in the group chat being in town.”

[Read more: Sean Urbanski’s trial has been postponed for a third time]

For much of the evening on Friday, students, faculty and officials from both universities joined together to celebrate Collins’ life, discuss race relations on their campuses and share ideas for “eradicating the culture of hate.”

The event, held at Bowie State University’s student center, began with a panel discussion, musical performances from students of both schools and a video tribute to Collins. Collins’ parents addressed the audience, encouraging listeners to emulate their son’s values and the way he moved through the world.

“Richard was light — if you knew anything about him, he was light all the way,” his mother said. “Be that light, be that beacon. Do not let anyone put your light under a basket.”

Amadu also joined Maryland sociology professor Rashawn Ray and Tafeni English, a representative from the Southern Poverty Law Center, in exploring the pervasive nature of violence against African Americans and how attendees can fight against hate in their respective roles in society.

The panelists also discussed how Collins’ death impacted both university communities. Amadu noted that since his friend’s killing, he has been scared to go back to College Park — he said being there gives him a kind of “sinking-heart feeling.”

After the panel, Ray expressed sadness that some students of color are afraid to visit the campus where he works. While he said he appreciates what the school does to prevent hate bias incidents, he added that there is still more that can be done.

“One of the primary issues — particularly for students — has to do with transparency,” he said. “I think students want to know more about incidents and the way that incidents are rectified.”

Last fall, this university established a report log for hate bias incidents that happen at the school. During this academic year, there have been 22 total incidents added to the log, four of them directly involving racist rhetoric against black people at this university.

Later, students had the opportunity to address the crowd in an open-mic forum that was closed to media, university officials and faculty members.

“Everyone who was there could not help but be moved,” said Zita Nunes, an English professor at this university who helped organize the event, describing the panel. “Each one of us who was there will leave and talk to other people, will use our various means of spreading the information — these events will build on one another.”

While several Maryland professors made appearances at the event, university President Wallace Loh was absent, drawing criticism from some of those in attendance. Early in planning, Nunes said she had reached out to him, and he had said he had a prior engagement at the same time.

Others expressed dismay at the low student attendance at the event — just over ten from this university went.

Nonetheless, Collins’ parents expressed gratitude for all who were there.

“So many people come up to us and say how strong we are but we — let me just tell you — there is no strength in us, we are a mess,” Collins’ father said. “But there’s moments, such as this one, that give us the strength and give us the courage to get out of bed one more day and face the world.”