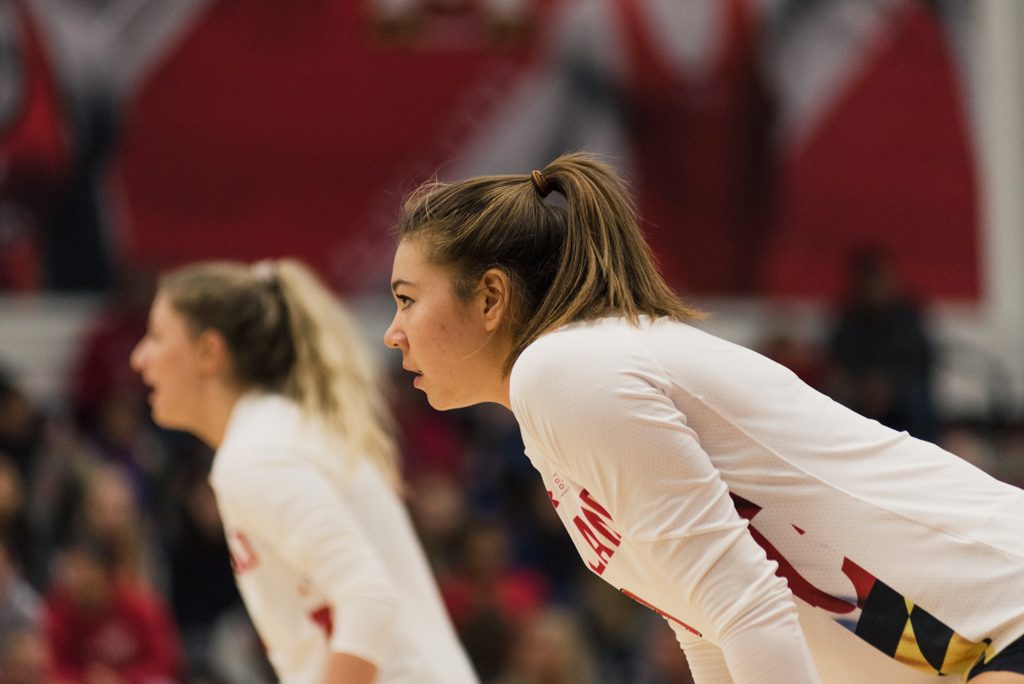 Outside hitter Erika Pritchard leapt up with two hands in the air and sent an Iowa block right back where it came from. That block gave Maryland volleyball its 25th point in the first set Saturday night, one it dominated throughout.

However, with the slate wiped clean in set two, the Hawkeyes flipped the script on coach Adam Hughes and the Terps. And after a strong first, Maryland allowed three straight Iowa set victories.

In their Friday night match at No. 6 Nebraska, the Terps kept it close much of the first set before the Cornhuskers pulled away. In both of its matches during its final weekend of the season, Maryland was unable to ride hot starts into the later sets, ending its 2019 campaign with familiar inconsistencies.

“I don’t think the first set [at Iowa] was a clear indication of what the match was going to look like,” Hughes said. “They settled down on the serve receive, then they had a pretty good offensive night.”

The discrepancy between the first set and the rest of the match wasn’t exclusive to this weekend.

While hosting then-No. 25 Illinois on Nov. 22, Maryland led the first set by five at one point, but allowed the Fighting Illini to come creeping back for the 25-23 set victory. From there, Illinois dominated, winning the final two sets by a combined 12 points.

Against Northwestern on Senior Day, the Terps won the first set, 25-17, yet didn’t win again until scraping out the fourth frame.

It’s a trend the team struggled to find answers for. But some players gave the Hawkeyes credit for overcoming their first set defeat.

“I don’t know if I can single out one thing as to why that’s been the case,” middle blocker Katie Myers said, “but tonight they were just better than us.”

The service pressure that allowed Maryland to snag a first-set victory against Iowa was noticeably absent from sets two, three and four. Hughes’ squad tallied five aces in the first, including a run of four in a row from Pritchard. The Terps were also helped by three service errors from Iowa.

After the serving success in the first, however, they would only add two more aces the rest of the way while adding five more errors from behind the endline. The flip in service pressure caused Maryland trouble for the rest of the match.

“We weren’t able to carry the first touch very well,” Hughes said. “We were constantly playing out of system and trying to create some opportunities for ourselves, which is tough to do.”

Despite the difficulty of playing from behind in the last three sets, the Terps felt as if they competed the whole time, especially when a run of three straight serves from Myers brought them within one point in the fourth set.

“It came down to who could control the ball better,” setter Nicole Alford said. “There was never a point where we felt out of the match; they just executed better down the stretch.”

The hot starts followed by inefficient offense came at a time where Maryland was no longer fighting for a spot in the NCAA tournament, finishing with a losing record in large part to season-long uncertainties.

“These are the kind of losses that make us realize we just have to keep going as a program,” Hughes said. “We know now that we’re officially done with this season, but the clock has already started for next year.”