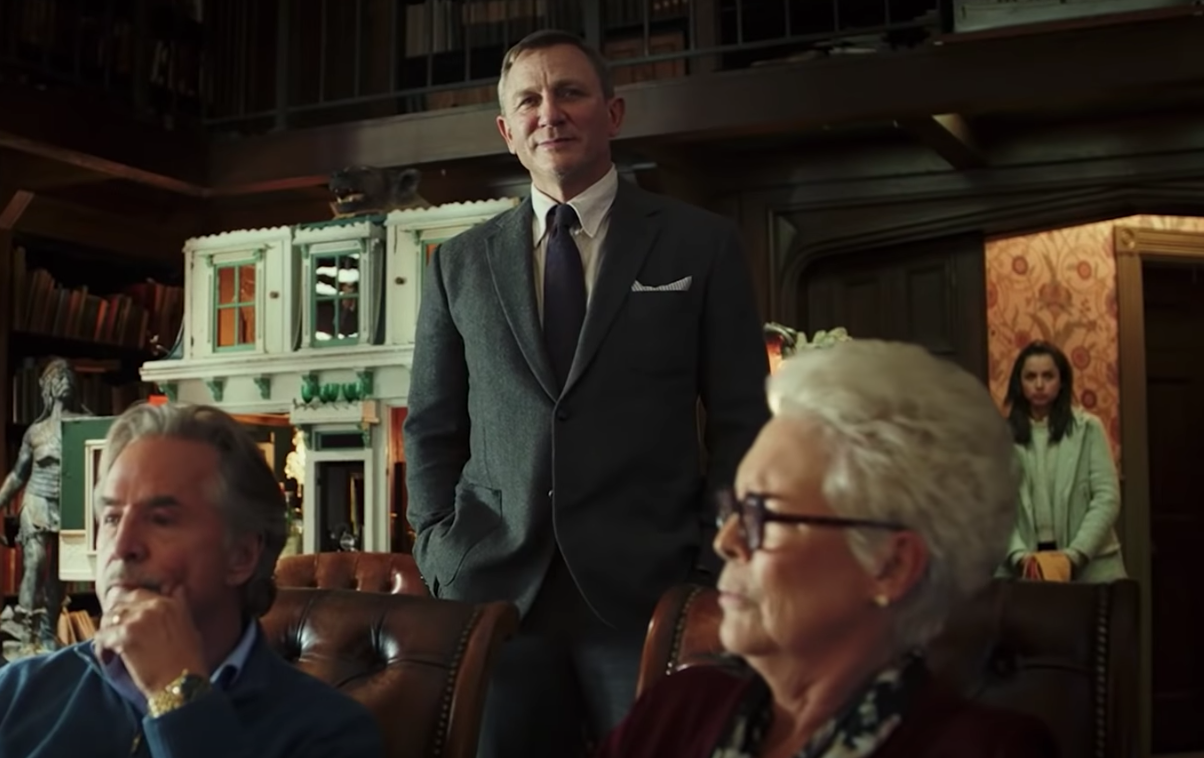 As a child, I gulped down murder mysteries for breakfast, lunch and dinner. CSI, Law and Orders, Bones, NCIS and every single episode of Midsomer Murders to name a few. Even the inspiration for my name, Iris, was taken from Agatha Christie’s Poirot. In summary, this shit runs in my VEINS.

So, due to my extensive crime show watch-history, I consider myself to be (somewhat arrogantly perhaps) a ~mystery aficionado~. When I saw that the star-studded whodunit film Knives Out was set to premiere around Thanksgiving, naturally I knew I had to watch it. I MUST know who done it(!!!), although, at the time, I didn’t even know what the crime was.

Now, what is the mystery you may ask? Harlan Thrombey (Christopher Plummer), a famed mystery writer, is suddenly found with his throat slashed right after his 85th birthday. The police say it’s a suicide, but Detective Benoit Blanc (Daniel Craig) — who was paid to investigate the crime by an anonymous person — thinks there’s something more to it.

[Read more: Action-packed thriller ’21 Bridges’ is exactly what it set out to be]

Benoit and Lieutenant Elliott (Lakeith Stanfield) set out to interview Thrombey’s family, and it seems like everyone has a motive. This takes up a good portion of the movie, and honestly was a little dry, despite all the potential motives being relatively compelling.

The actors all captured the essence of their caricatures well and elicited a few chuckles here and there — mostly on account of politically oriented jokes of the “ok boomer” and “liberal snowflake” variety. The kind of stuff you go home on Thanksgiving and fight your family about — which I think the writers and actors emulated in a very humorous and spot-on way.

Unfortunately, none of these characters are fleshed out enough to make this longggg section of the movie worth watching in its entirety. I found myself thinking, “GIVE ME MORE.” I needed more motives and more intensity to really raise the stakes.

The director said his goal for the movie was to keep you guessing and hoped that people wouldn’t know who committed the murder until the very end. In a way, he achieved that goal. But by the end of the movie, I had waited so long for the grand twist that would shake me to my core that I kind of didn’t care.

There is way too much time spent on one suspect’s alleged guilt. Which means you “know” who killed Thrombey for about 75 percent of the movie. This trick — which is in fact a trick, because this person does not end up actually being guilty — only works if you smack the viewer in the face with the certainty it was one person, and then quickly punch them in the gut with doubt to challenge that original conviction. Johnson allows viewers to become complacent with one scenario to the point that you ask yourself, “Why am I still watching this movie if we know who did it?”

[Read more: Review: ‘Suffragette’ leaves the glamour behind in revealing the struggle for women’s suffrage]

The message of this film is nice: A good heart and kindness triumph. The movie acts as a scathing criticism of class differences and xenophobia. This all surrounds the main character of the film, Marta Cabrera (Ana de Armas), who was the nurse to the millionaire Thrombey. She’s cute and — spoiler alert — has a good heart and is the only character that is fleshed out enough for me to care about, which makes sense in retrospect since the film ends up being about her experiences, as opposed to the family and the murder.

Benoit says at least three times that Marta has a good heart and after the second time it becomes annoying. Didn’t anyone teach the filmmakers about show don’t tell? Because they showed how she was good, and that was ENOUGH. I don’t need Daniel Craig’s horrendous, fake Southern accent telling me a million times to understand.

All in all, if you want to watch Knives Out, go for it. There are parts of it that are entertaining and the twist is pretty good. It’s just much longer than it needs to be. So, if you have time to kill this holiday season and want to watch a movie that makes its social commentary painfully obvious Knives Out is the one for you. For someone like me, who consumes mystery like I do bubble tea (often), there was a lot left to be desired.