‘Alcohol is not an excuse’: SGA event focuses on sexual assault prevention 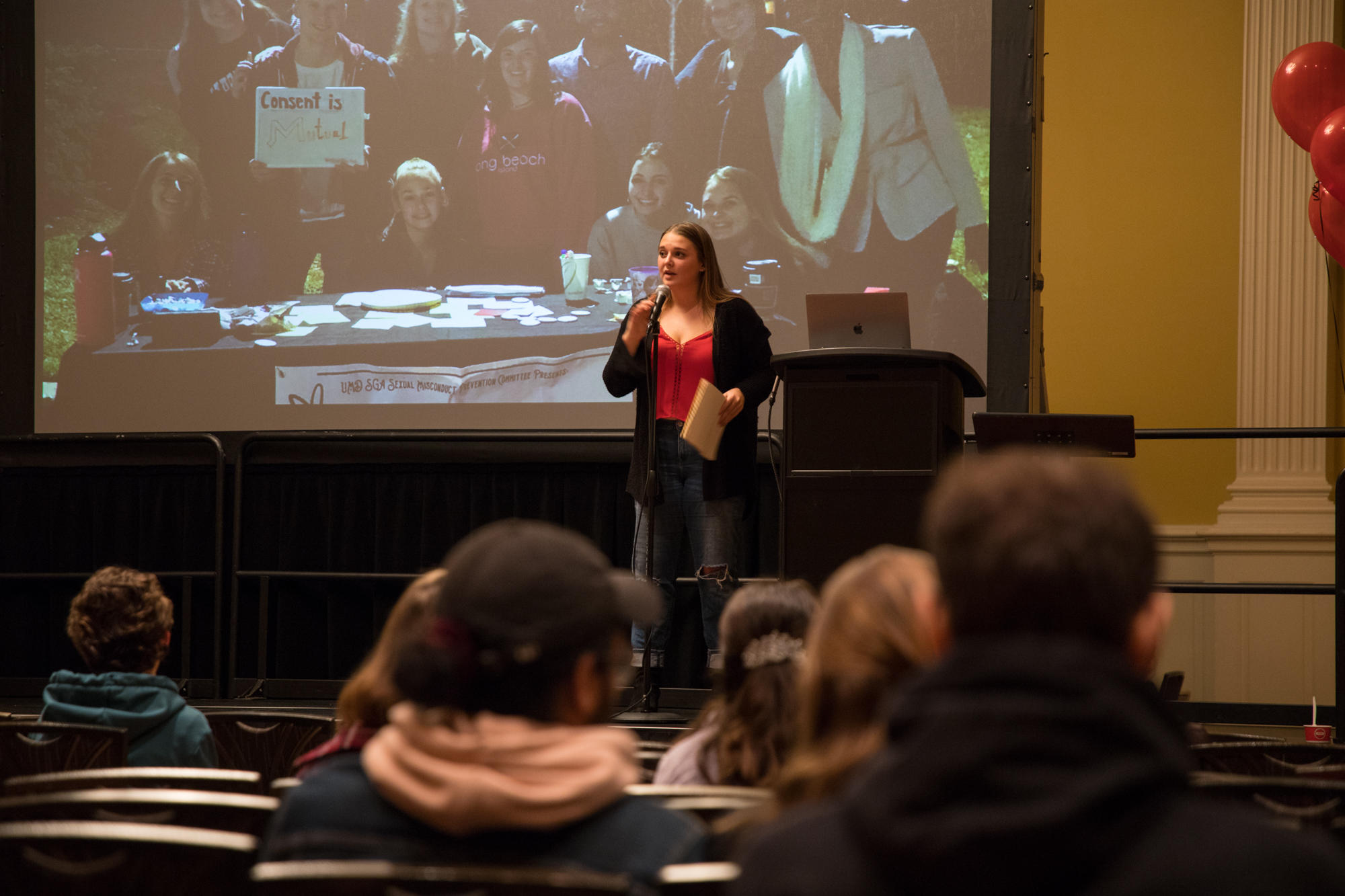 Elena Levan, director of SGA's Sexual Misconduct Prevention committee, speaks during the Reclaim the Red event held at the Stamp Student Union on Nov. 21st, 2019. The event's purpose was to raise awareness of the Red Zone, the time span during the beginning of the fall semester when the majority of sexual assaults occur on college campuses. (Evan Kramer/The Diamondback)

Speakers and activities raised awareness for the “red zone” and sexual assault prevention at the University of Maryland on Thursday during an event called Reclaim the Red: Moving Forward.

The event, hosted by the Student Government Association, is named after the “red zone” — the period of time at the beginning of the fall semester where female students are more vulnerable to sexual assault, according to the National Organization for Women. This phenomenon is most prevalent in freshmen because they are experiencing a new environment without solidified social groups and have more free exposure to drugs and alcohol, according to the organization.

“When you’re new to campus, you don’t know where anything is,” said Grace Fansler, a prevention and education program coordinator for Maryland Coalition Against Sexual Assault. “You don’t have a strong social support network. That’s why this time of year is such a high risk for our students.”

The SGA event included multiple tables with attractions and activities such as rock painting, ice cream from The Dairy, a Reclaim the Red banner and a kissing booth, where students were offered Hershey’s Kisses.

“If the person says ‘Yes,’ then they’ve had a consensual experience,” said Alon Sherman, a sophomore government and politics and public policy major who represents the Leonardtown community for the SGA. “This helps leverage conversations about consent and is a great learning tool.”

Various university and student-run groups also tabled at the event. At its table, the Counseling Center offered an activity where students read scenarios involving sexual encounters and discussed if the situations were consensual. Kseniya Zhuzha, a counselor on staff in the center, stressed the goal of this event was to help facilitate the conversation about consent.

“Consent is not exactly ‘cool’ in our culture,” Zhuzha said. “Peers talking to peers is one of the most important ways we will normalize the conversation around consent.”

Fansler discussed sexual violence as a power-based interaction. In the power struggle, there are often consequences when one partner won’t consent to the other.

“Those consequences could be a weapon, or maybe they’re implied, like a threat: ‘I’m going to send that picture of you to everyone if you don’t do what I say,’” Fansler said.

CARE to Stop Violence staff member Katie O’Mailey also talked about the physiological effects of assault and the how a person’s brain is affected when they are healing from a traumatic event.

“A lot of people think healing is moving forward, as though it’s a linear path,” she said. “Healing does not mean improvement all the time. It just means some sort of momentum. As long as you can feel yourself moving backwards and not beat yourself up over it, you’re healing.”

Kush Kharod, a junior mechanical engineering major, said sexual assault is not discussed enough in the media. He said seeing the number of people at the event, provides support to victims.

“Here, we’re actually talking about the science and statistics behind [sexual assault],” he said.