Review: ‘The Report’ succeeds in breaking down the probe into CIA torture use after 9/11 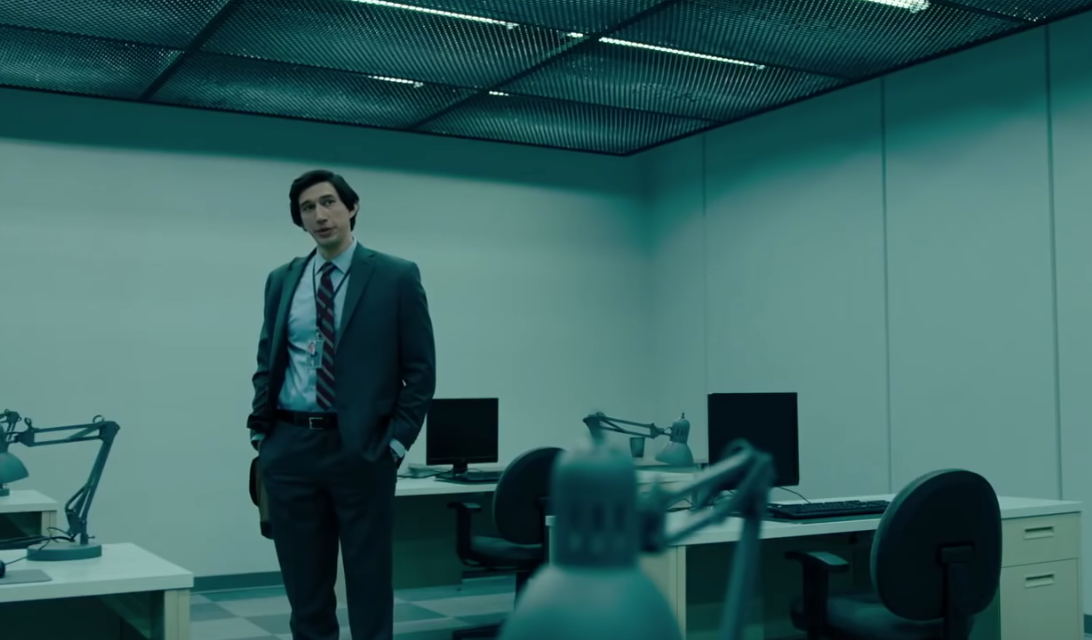 Adam Driver as Daniel J. Jones in 'The Report' (Photo via YouTube.)

I arrived at the Georgetown Ritz-Carlton on a Tuesday night in early November nervous as all hell. I wore my “business” pants in the hope that I would be able to mask my youth and look like I belonged in this fancy setting as I waited in the lobby.

After ten minutes of sweating, I was passed along from person to person until I finally reached my destination: a dark circular room. The flooring was some kind of stone, the walls probably mahogany. In the center of it all was a smooth circular table, and in the moment, it looked like it went on forever — but then I saw former Senate investigator Daniel J. Jones and director and screenwriter Scott Burns seated around it.

Despite how imposing this situation might sound (and how very baby I felt), Jones and Burns almost immediately put me at ease with their jovial introductions and small talk about universities. So, what were a Blue Jay, a Golden Gopher and a Terp gathered at the Ritz for? To talk about Burns’ new movie, The Report, of course.

The titular report refers to a 6,700-page report on the CIA’s use of torture on detainees post-9/11. The seven years it took to complete the investigation are condensed into about two hours in Burns’ on-screen recreation, but this film left me thinking about it long after I finished watching.

I was approximately 2 years old when 9/11 happened, so I don’t remember much about it and its aftermath. But, watching a film like this transported me to the time and the mindset of the people who do. The mass loss of innocent life caused people to be scared, angry and humiliated. Most of all, the CIA hadn’t done what it was supposed to when officials failed to alert the FBI about possible threats in the U.S. and put a plan in motion to disassemble al-Qaeda.

In a state of desperation, the CIA brought in two psychologists who claimed to have a new set of “enhanced interrogation techniques” guaranteed to get whatever information out of detainees they needed. Among these techniques were water boarding, and other forms of what the rest of us would probably call torture.

In the movie, time and time again, the CIA officials justify their actions by saying “It’s not illegal if it works.” But here’s the thing — it didn’t.

“It was 100 percent clear that all the CIA’s claims regarding the effectiveness of torture tactics were wrong in fundamental ways,” Jones said. “And that torture is not an effective way of obtaining information. And you know, our enemies have used torture, not to get intelligence, but to get propaganda statements, to get admissions and false answers. And that’s what we document over and over again, it’s not us making this up. This is the CIA’s own records.”

There were graphic scenes that depicted the torture of the detainees, which in any other circumstance would have put me off, but I know they were put there with a purpose. You get to see both sides of the situation — people who think the detainees deserve to suffer for working with terrorist organizations, and people who view the forms of torture and interrogation as unethical despite deplorable things the detainees may have done.

Burns decided to include these scenes because he didn’t want to do the same thing the CIA did: concealing the truth behind the language.

“A lot of the movie is about language,” Burns said. “You know, the CIA called it enhanced interrogation. Most other people would call it torture. There are other sorts of tricks of language surrounding what they did to the law that also obfuscate what really went on.”

What’s really remarkable about this movie is its commitment to accuracy, a choice Burns said came from pondering the difference between the truth and fact.

“When you say that you’re making a true story, that can mean a lot of different things,” Burns said. “For me, what I wanted to do was pull as many facts as I could from the report. So, when we talk about the program itself and the techniques, the language that I use was language that was pulled directly from the pages of the report … and I believe that the truths that we arrive at in this story are ones that are supported by those facts.”

Burns also chose to keep Jones’ personal life out of the flick since he didn’t want to compromise this vision of “a man on a mission,” and I think he succeeded in that. The meat of this film solely revolves around the report, and puts the audience in the same mindset as Daniel J. Jones was all those years ago — that the truth must come out.

Was this the most exciting and riveting film I ever watched? No, and that’s the gamble with making a movie that recounts the facts like this. But, the acting was excellent — from Senator Dianne Feinstein (Annette Bening) to the creepy psychologists (Douglas Hodge and T. Ryder Smith). And there were moments that had me holding my breath in suspense, recoiling in disgust and scoffing at the audacity throughout the film.

In this case, it’s important to acknowledge what the director’s purpose for this film was: to make the report digestible for the masses. This movie was a lot less dramatic and entertaining than other political thrillers I’ve seen, but it still managed to captivate me; I think Burns accomplished his goal — to find a way for people to learn the important takeaways without having to make them read 6,000 pages of text.

It made me feel the weight of the report’s importance. Even though the CIA wasn’t held accountable for its egregious failures, hopefully with the knowledge gleaned in the report, our nation’s leadership can stop something like this from happening again.

“I want people to not lose track of the fact that the program really happened and people were not held accountable,” Burns said. “And getting the truth out should not have been that hard.”