Review: ‘RENT’ 20th Anniversary Tour was a hit, besides its one major flaw 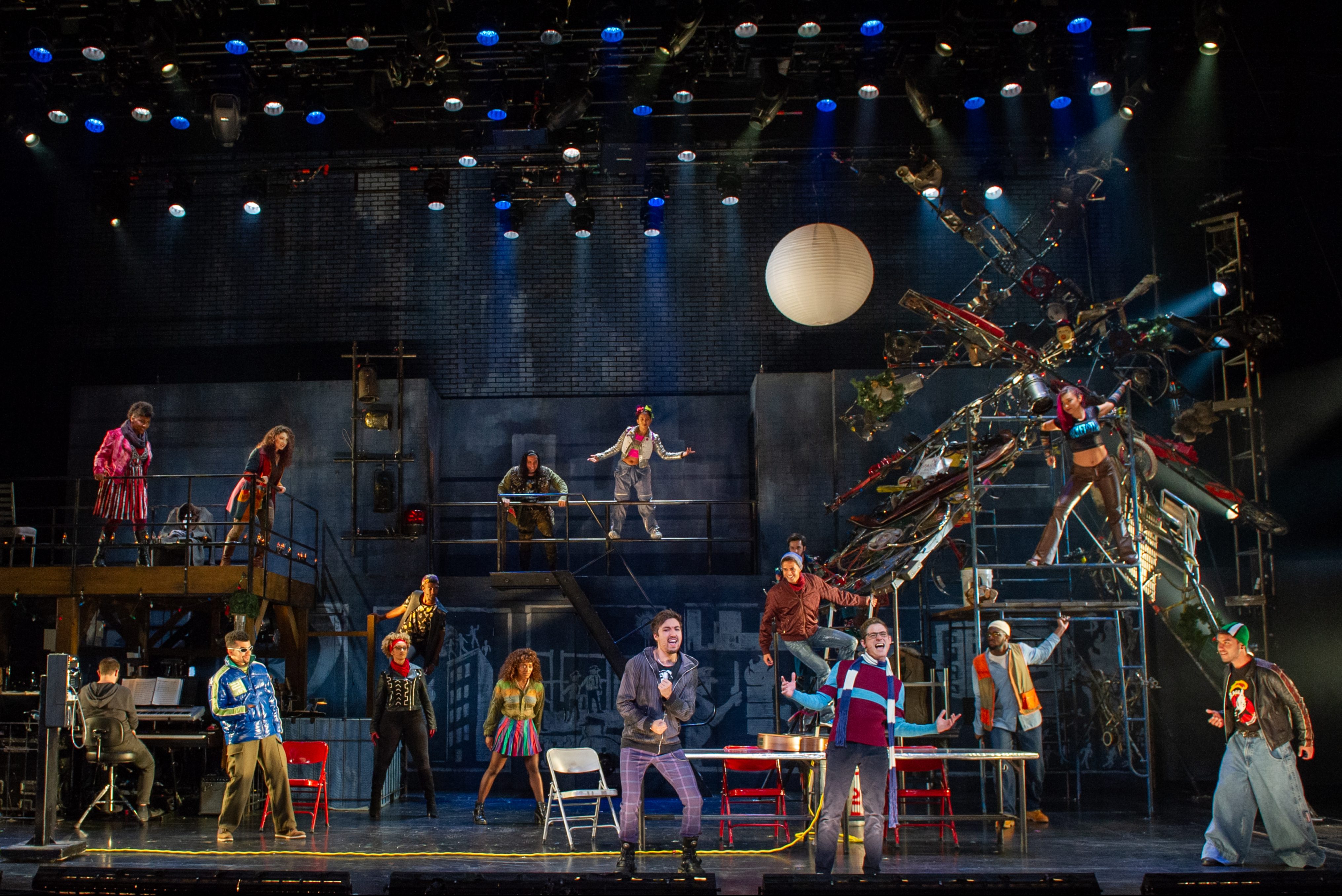 If you know me, even a little, you know I’m a Rent superfan. I know every word to every song and sing the duets by myself with precision. I can even change my voice to sound like every character with — in my opinion — stunning accuracy. When I heard the production’s 20th anniversary tour was coming to Washington, D.C., I jumped at the opportunity to be there.

When I walked into the National Theatre, I was instantly transported back to when I was a child and saw the play on Broadway. The set seemed identical: An entire tent city has to exist on this stage, and the ragtag mountain of bicycles, street signs and lights provides the perfect backdrop (and also a makeshift Christmas tree for the oh-so-jolly time of year).

The show opens with Mark Cohen, played by Cody Jenkins, entering his role as narrator. He might as well have been a clone of Anthony Rapp, who played the original character on Broadway, because everything about him was dead-on. His costume (jeans, sweater, scarf, Converse and glasses), the affectation of his voice and his facial expressions all gave me hope that this would be the perfect show.

Those hopes were slowly, but surely crushed the moment Roger Davis, played by Coleman Cummings, began singing the musical’s titular song “Rent.” His costume was off-putting: tight burgundy and black plaid pants with combat boots and a zip-up hoodie. This was not the brooding classic rock star I wanted. He was more emo than tortured and looked like he was in a punk band. He was so stiff and underwhelming during some parts of the show it was distracting.

Because of this, Roger and Mark had limited chemistry, and this problem carried into all of Roger’s relationships. In “Light My Candle,” the flirty beginning of a romance, Cummings couldn’t pull it together enough to keep up with the back-and-forth sing-song conversation the number requires. At the time, I couldn’t believe that Mimi Marquez — played by Aiyana Smash — was going to be just as bad as Roger.

Thankfully, when Smash came out for Mimi’s signature song “Out Tonight” she redeemed herself and further proved that Cummings was the issue all along. Her performance could be described as high energy on steroids. Smash shook, kicked and danced on railings at least 30 feet in the air and swung through the set like it was her personal jungle gym, all without missing a beat or a note. She then went straight into the emotionally-strenuous song “Another Day” with the ease of Rosario Dawson herself.

This review, however, would not be complete without mentioning the standout moments of the night, starting with “Over the Moon” performed by Kelsee Sweigard. With her over-acting and artistic liberties, she had the audience laughing and moo-ing to their heart’s content. It was a true highlight of Act 1.

In the second half, Shafiq Hicks’ rendition of “I’ll Cover You (Reprise)” was full of true pain and unconditional love. Up until that point, Hicks’ role of Tom Collins was nothing special. He had a fine voice and did a fine job acting on stage. But this moment turned things around. The depth he showed was unmatched by the other actors, both in his vocals and emotion.

And of course, Angel’s death paired with that song had the room in tears. The man sitting next to me was sobbing into his hands, and even I let a single tear stream down my face before composing myself. I could hear sniffles from the audience as Hicks hit his final note and the stage went black.

In my superfan eyes, this rendition was on par with any other musical I’ve seen … aside from every time Roger stepped on stage. The first act had all the fast-paced, almost-tangible energy you feel in New York City, while the second let us breathe while we mourned the death of a friend and matured beyond our years. The show had all the heart and soul of the original cast — fitting for the 20th anniversary — but allowed the actors to add their own little flairs to their character.