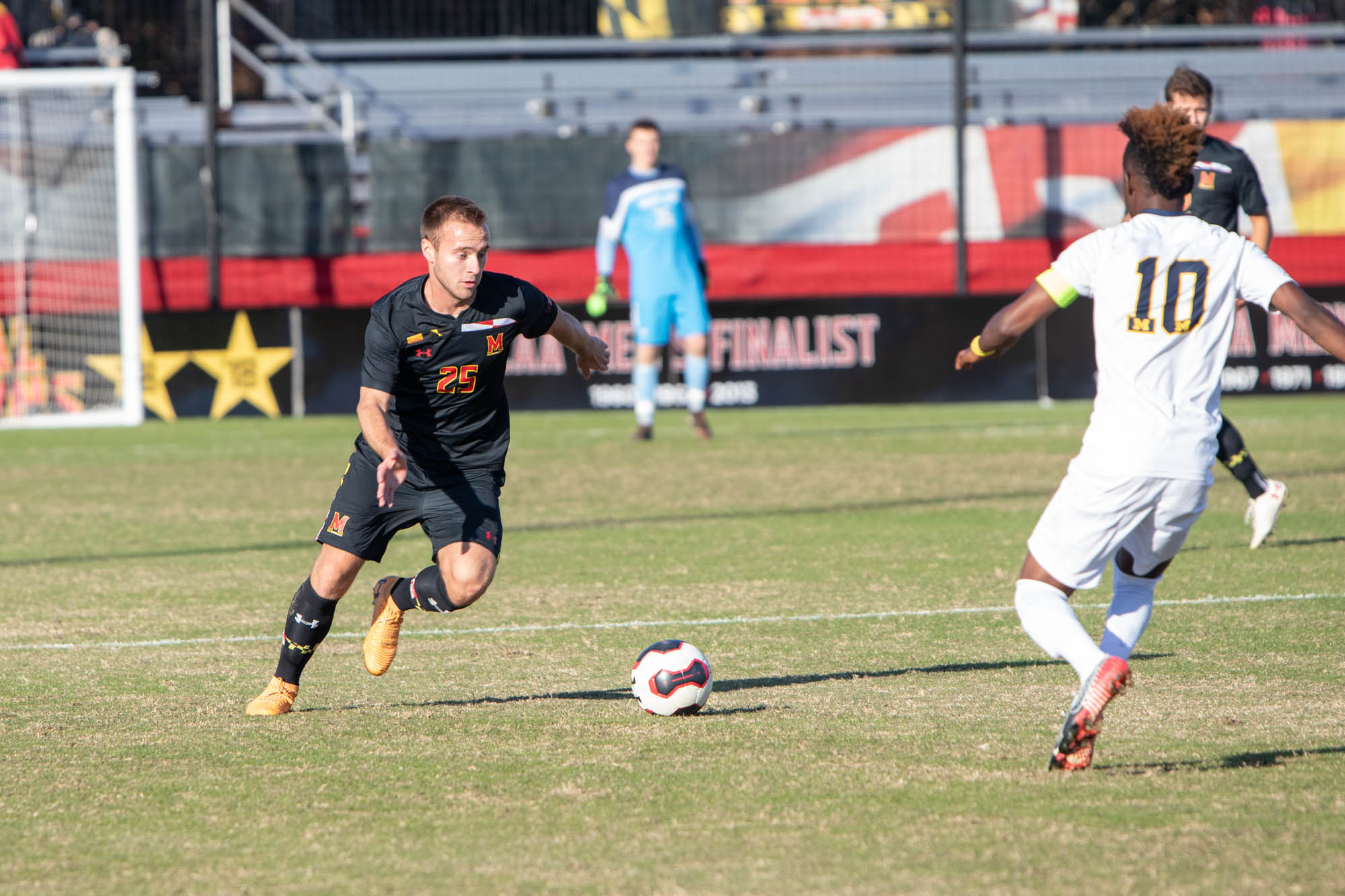 With his team playing into strong wind gusts in the first half of its Big Ten quarterfinal matchup, No. 23 Maryland men’s soccer coach Sasho Cirovski knew the offensive opportunities might be scarce until halftime prompted his squad to switch sides.

Northwestern’s attack had the first-half advantage with the wind at its back, so Cirovski’s message to his Terps team was centered on getting to halftime unscathed.

The Maryland defense, which allowed seven goals in its past two matches, was up to the challenge. It survived an aggressive Wildcats start before clinching its 10th clean sheet of the season with a shutdown second half in the 1-0 victory.

“We executed our plan well. We didn’t give up too many dangerous chances,” defender Nick Richardson said. “Overall, I thought we played well in the first half, and it just translated into the second half.”

Early on, Northwestern’s advantage with the wind at its back was apparent. The home side enjoyed the majority of possession, constantly working the ball toward the Terps’ box.

Maryland’s defense, though, did well to prevent any meaningful chances. Freshman goalkeeper Niklas Neumann faced three shots on goal in the first 20 minutes, but he easily handled each to keep the Wildcats from establishing an early lead.

The Terps defense, which had difficulty keeping shape and staying connected in two consecutive defeats, reverted to the cohesive brand that earned shutouts in the three games prior to the skid.

“The last two games, we’ve kind of been a little bit disconnected and it hasn’t went our way,” Richardson said. “But today, I thought [we] came back to where we were before those two losses.”

Richardson, who’s been a key cog in the defense as a holding midfielder all season, was called upon in a different role on Sunday. Right back Ben Di Rosa left the match in the 12th minute because of an illness, pushing Richardson into that role early.

One of Northwestern’s most dangerous options is midfielder Matt Moderwell, who primarily plays on the left flank of the Wildcats’ attack.

In their first matchup against Maryland on Sept. 20, Moderwell recorded a goal and an assist. In Sunday’s win, though, Richardson negated the impact of the player Cirovski identified as a threat in the wide areas of the field.

“Even the few times they were able to penetrate, I thought our box defending was outstanding today,” Cirovski said. “We knew if we could neutralize the wide area from Northwestern, then we could have a lot of success.”

With Richardson moving to the right back position, Cirovski summoned freshman midfielder Jacob Chakroun to play as a defensive midfielder. Prior to his appearance on the big stage in the conference tournament, Chakroun had played just 177 minutes this season.

“[He’s] a really talented player but had to fight for his time early in the year,” Cirovski said. “Today, his number was called for big minutes, and he responded in wonderful fashion.”

When the game entered the second half, it was the Wildcats’ turn to play into the wind. Northwestern was burdened too, registering just one shot on goal in the second half — a rare dangerous chance that Neumann had to fight off to keep the game level.

Once midfielder Eli Crognale’s 71st-minute penalty pushed the Terps to the lead, the defensive strategy for the final 19 minutes started to resemble that of the first half.

“Basically we wanted to keep everything in front of us,” Crognale said. “We knew that if we just stayed compact and our lines were tight, they weren’t going to play through us … We just kind of gave them zero options.”

In the quarterfinal victory, Maryland adopted a similar defensive philosophy to last year’s College Cup-winning team. As the Big Ten tournament shifts to Ludwig Field, the Terps know how valuable the lockdown effort in the defensive third was Sunday — and how critical such a performance could be moving forward in the postseason.

“We knew it was win or go home, so we played with that desperation edge on defense,” Crognale said. “[That’s] the attitude and mindset we need to have going for the rest of postseason — and we plan on doing that.”