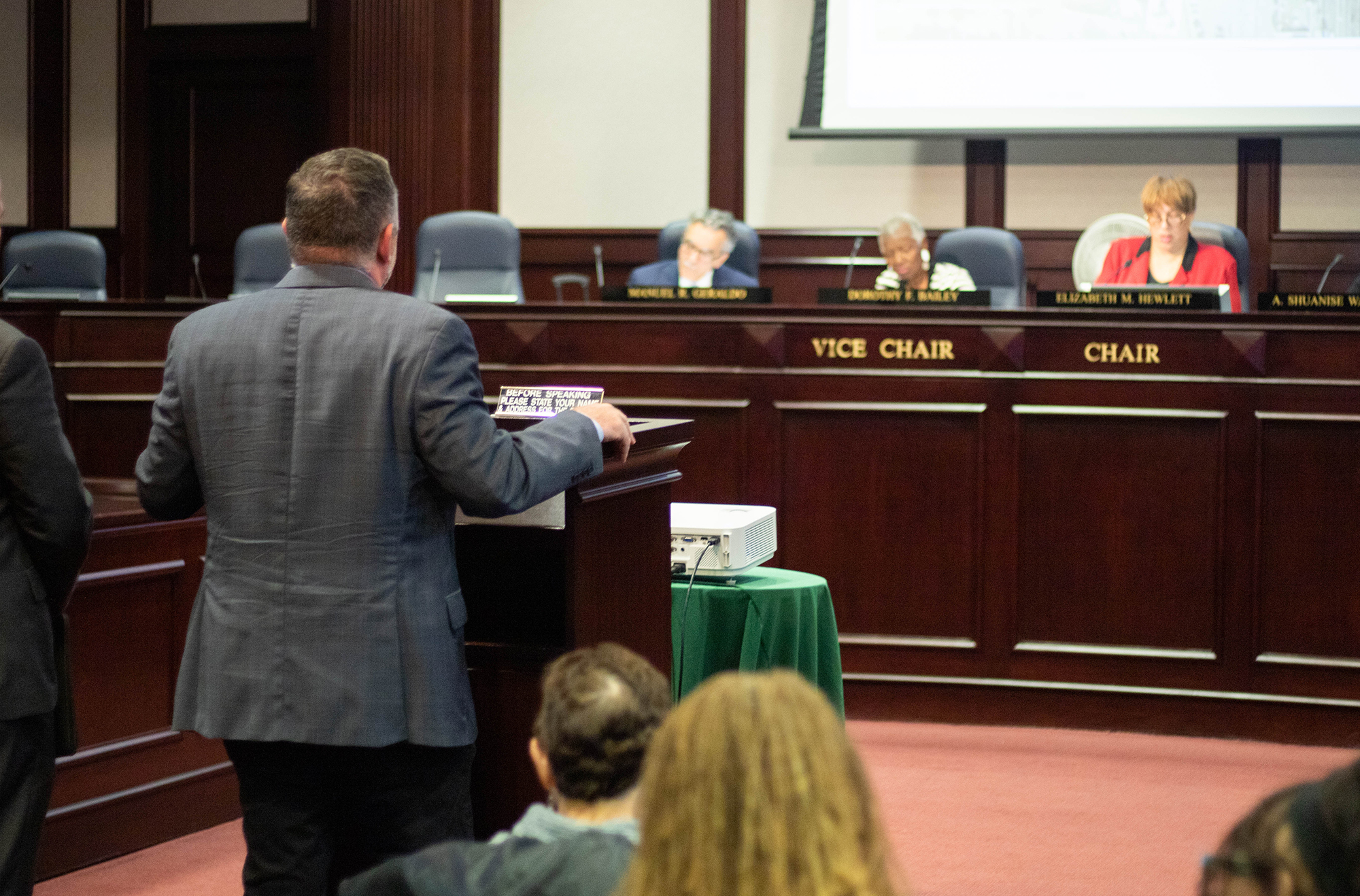 Ken Ulman, the President of the Terrapin Development Company, and Thomas Haller, attorney for Greystar, speak at a Prince George's County Planning Board hearing in Upper Marlboro, MD. on Nov. 7, 2019. (Julia Nikhinson/The Diamondback)

The Prince George’s County planning board voted unanimously to approve a developer’s preliminary plans to redevelop a strip of the College Park shopping center just off Route 1 at its Thursday meeting.

The decision marks the final step in the first phase of the county’s development review process for a project that would replace several popular shops near the University of Maryland — including Marathon Deli, Lotsa Pizza and Insomnia Cookies, to name a few — with an apartment building.

Now, the city of College Park, civic associations and county residents — if they register as a “person of record” on the county’s website — have 30 days to appeal the decision. If nobody does so, the board’s decision becomes final and the review process will proceed.

The decision came after more than an hour of discussion between the developer, Greystar Real Estate Partners and officials from the Maryland-National Capital Park and Planning Commission — the body that oversees much of the development in the county.

Most of the discussion revolved around tweaking conditions to Greystar’s original plans, particularly one that asked the developer to pay a fee instead of dedicating parkland to the commission.

When conferring with potential developers during the review process, the M-NCPPC first asks them to hand over part of the property in question for future recreational activity. For Greystar, that piece would be about 10,000 square feet, said Thomas Haller, the attorney representing the company.

Doing so would make sense in a larger residential space, but not so much in a city like College Park, which is already covered in development, said city planning director Terry Schum.

For companies that choose not to dedicate parkland directly to the M-NCPPC — most of the developers who come to College Park, Schum said — there are two alternatives. Companies could pay the commission a sum of money to go toward parkland, or they could add private recreational facilities to their developments.

At the meeting, Greystar proposed taking the latter option and including a 3,200 square foot, two-story fitness center in the planned apartment building. The company additionally offered to dedicate funds toward improving the nearby university-owned Southgate Park — money Terrapin Development Company President Ken Ulman said would be a welcome contribution to land he described as a “piece of grass.”

However, M-NCPPC requested that Greystar pay a fee in addition to these steps.

“We’re very supportive of this project and the development that’s happening along Route 1,” said M-NCPPC planning and acquisition manager Sonja Ewing. “We’re also in support of the work that they’re planning to do both inside the building and at Southgate Park. Unfortunately, it doesn’t necessarily align with our needs and finding for the mandatory dedication purposes.”

Haller, however, said that requiring Greystar to pay a fee — which he said would total about $136,000 — on top of both providing private recreation facilities and helping revamp Southgate Park was asking a lot of the company.

“All dollars are important in terms of trying to implement the vision that the university and Terrapin Development Company and Greystar have for this project,” Haller said. “To siphon off that kind of money from this project is money that can’t be put into the project.”

During a break from the discussion, College Park senior planner Miriam Bader expressed confusion over why M-NCPPC was asking for a fee on top of Greystar’s plan for building a recreational facility.

“In the past, they have approved it,” Bader said, citing both the Varsity and Landmark apartments as examples of buildings that have included indoor gym facilities to fulfill the commission’s requirement.

When the discussion resumed, it seemed like Greystar and the commission had reached a resolution: M-NCPPC staff member Christopher Davis informed the planning board the company would be permitted to forego paying the fee, and just include a private recreational facility in its development.

Just before the board passed a motion to approve the plans, Schum brought up another condition — concerning the creation of an ADA-compliant sidewalk between the development and Route 1 — that had received much discussion at the city level. Greystar and Schum nailed down the plans for the sidewalk, agreeing it would run along Lehigh Road.

Greystar’s next step is to file detailed site plans with the county, Schum said. The county council must approve of those plans — which will contain particulars on the development’s architecture and appearance — in order for the project to move forward into permitting and construction.

At the tail end of a lengthy meeting, county planning board chairwoman Elizabeth Hewlett asked Haller if he had any last comments.

“I know when to stop talking,” Haller said.

“That’s a good answer,” she replied.