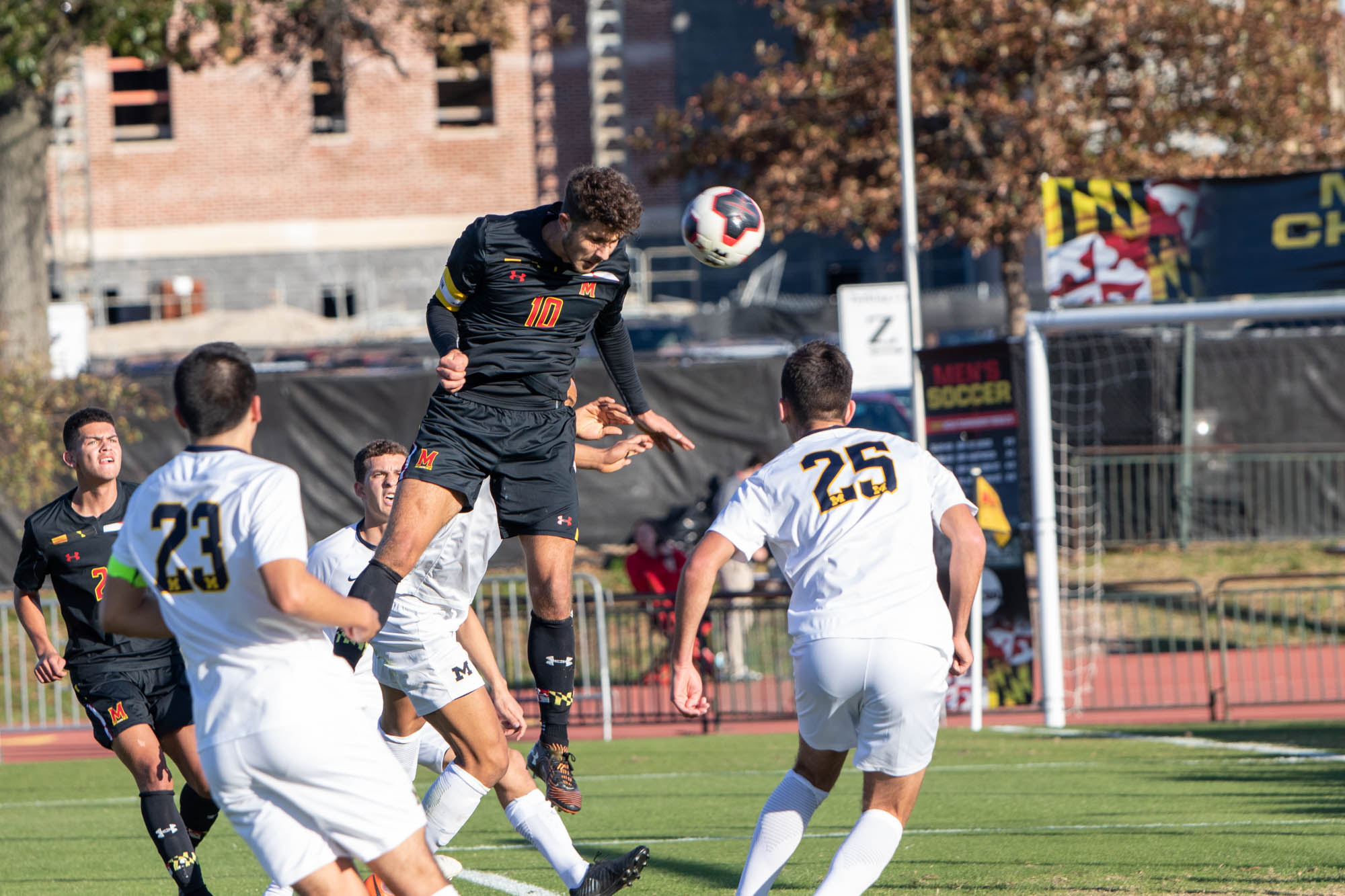 Entering Sunday’s match, Michigan and No. 17 Maryland men’s soccer were slotted at third and fourth in the conference standings, respectively. The Terps needed a result to have a chance to host a Big Ten quarterfinal game.

Trailing 3-2 with 30 seconds to play, coach Sasho Cirovski sold out for the equalizer, sending goalkeeper Niklas Neumann to the box for a corner. Once the Wolverines cleared the chance, forward Jack Hallahan sprinted across midfield and rolled a shot toward the vacant net.

The ball steadily inched toward the net and trickled across the line to seal Maryland’s fate as the No. 5 seed in the conference tournament, as Michigan erased a second-half deficit to claim the No. 3 seed for itself with a 4-2 victory over the Terps on Sunday evening at Ludwig Field.

“It’s disappointing,” defender Johannes Bergmann said. “Our goal was obviously to play here [for] the quarterfinal, but it didn’t work out.”

In the fifth minute, defender Ben Di Rosa worked his way around a defender at the end line and drove toward the net. Goalkeeper Owen Finnerty was in a peculiar position of whether to defend the shot or a pass. Di Rosa waited him out and ultimately sent a pass across to forward Eric Matzelevich, who tucked in the goal.

“I saw the defense was kinda off balance,” Di Rosa said. “[I] was able to take it end line, and Eric was in a good spot for an easy goal across the face of the goal.”

[Read more: Eli Crognale, the youngest in a soccer-filled family, has made his own name at Maryland]

Just minutes later, Michigan played a cross to the box that took a deflection toward Neumann. While Neumann elevated to make a play, Michigan defender Jackson Ragen knocked Maryland’s shot-stopper to the ground. Forward Mohammed Zakyi was in the right position to put the ball in the back of the net.

As Michigan tepidly celebrated, the Terps looked around waiting for a foul to be called. After it was clear there wouldn’t be, Cirovski yelled loudly from the sideline, “That’s a foul,” followed by, “Unbelievable!”

Cirovski’s squad didn’t allow the controversial call to shake its confidence, though, responding in the 12th minute to regain the lead.

“I thought it was a foul,” Bergmann said. “But, whatever. We came back very good, bounced back very good [and] scored a second goal.”

The goal-scoring sequence started with Bergmann playing a ball from midfield to Di Rosa on the right flank. Di Rosa looked up, picked out midfielder Eli Crognale in the box and sent in his cross. On his Senior Day, Crognale headed in the score to put the home side back on top, 2-1, a lead the Terps carried into halftime.

But a minute after action resumed for the second half, Michigan seized control of the match. Hallahan lofted a cross into the box, where forward Derick Broche beat two Maryland defenders in the air and headed in the goal.

Eight minutes later, that goal-scoring tandem took on opposite roles. Broche delivered a cross into the box, and Hallahan’s header beat Neumann to push the visitors into the lead.

“They were very efficient on their crosses in the box,” Cirovski said. “And our box defending was weak today.”

For the second consecutive game, the typically reliable Maryland defense had relinquished an early lead and forced the attack to search for an answer.

Matzelevich nearly provided that response with 50 seconds left. The junior unleashed a strike from outside the box that was headed for the upper-right corner. But Finnerty laid out and got just enough of the shot to deflect it out of play.

On the ensuing corner, the ball kicked around in the box briefly before Hallahan took control and wrapped up the No. 3 seed for the Wolverines.

With the result, Maryland dropped to the No. 5 seed and will play on the road against Northwestern next Sunday in the quarterfinal round. If the Terps win that game, they would return to Ludwig Field, the site of the Big Ten’s semifinal and final rounds.

“We’ll do everything we can to try to come back here for the semifinal,” Cirovski said.