After a 3-3 start, Maryland men’s soccer leaned on its culture to turn the season around 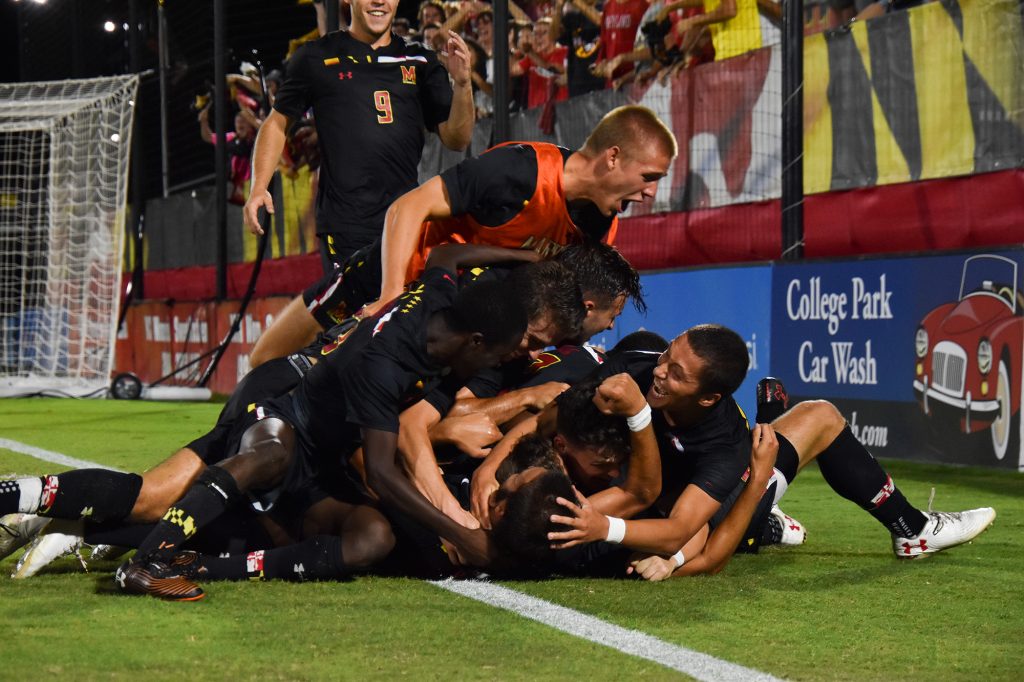 In Maryland men’s soccer’s 3-0 win over then-No. 6 Indiana on Oct. 18, forward Justin Gielen timed his run perfectly to be open for a header on midfielder Eli Crognale’s set-piece cross.

As Gielen elevated for the attempt, though, in stepped defender Johannes Bergmann, who jumped in front of his teammate to head home the goal himself. Though Bergmann had just intercepted a prime chance for Gielen to add to his goal tally, there wasn’t a second of hesitation from the sophomore as he chased down Bergmann to celebrate.

It was a subtle gesture, but it nonetheless encapsulated the selflessness and cohesion the Terps have leaned on to steer their season back on track after a spotty start.

“In the beginning, very rough start. But that only helped our team culture. It was the losses, and the ties and the away games that we didn’t really perform in,” forward and team captain Eric Matzelevich said. “Everyone came together off the field and had that really strong bond and really strong culture.”

[Read more: Justin Gielen is embracing his role as an aerial threat for Maryland soccer]

Six games into the 2019 campaign, coach Sasho Cirovski’s group was a middling team, sitting at 3-3. Maryland showed promising glimpses in its three 1-0 wins, but it also had clunkers against Northwestern and then-No. 12 Virginia.

Then, in a game against then-No. 9 St. John’s, the Terps snatched a victory in the 109th minute — just over a minute before the match would have ended in a draw. The team piled on top of defender Brett St. Martin in the corner of Ludwig Field after his match-winner, an outpouring of emotion that signaled the flip of a switch.

“We’re just a group of guys that are all friends and play soccer together,” Gielen said. “[Chemistry] builds in the spring, it builds in the fall. We just like being around each other.”

St. Martin’s goal represented the turning point in the Terps’ season. Since then, Maryland has reeled off five wins and two draws in its last nine outings heading into Tuesday’s road matchup with No. 19 Penn State.

Even before that seemingly season-changing win, Cirovski was confident his team would find its way as the year progressed.

“We just have so many players with so much substance that are just great young men, great competitors, very selfless in their approach,” Cirovski said. “I think there’s an inner strength and inner confidence within our group that we’re going to be a contender.”

Even as a team captain, Matzelevich said he didn’t have to do much to instill the team’s culture into the newcomers.

Becoming a part of the Maryland men’s soccer program happens almost organically, he said. The players all live together and spend much of their time together off the field.

“I see these guys more than my own family,” said Matzelevich, a Washington, D.C., native. “It’s really just how we conduct ourselves off the field and just our culture of bringing everyone together and kind of being like a big family.”

The junior credited Cirovski with the environment he’s established for players over his nearly three decades in College Park. Matzelevich said it’s easy to buy in when the identity is passed on to each new wave of players.

For Cirovski, the Maryland culture and identity is contingent on the standards he’s set for every player who has been under his tutelage. And this year, it’s helped right what was a listing ship early on.